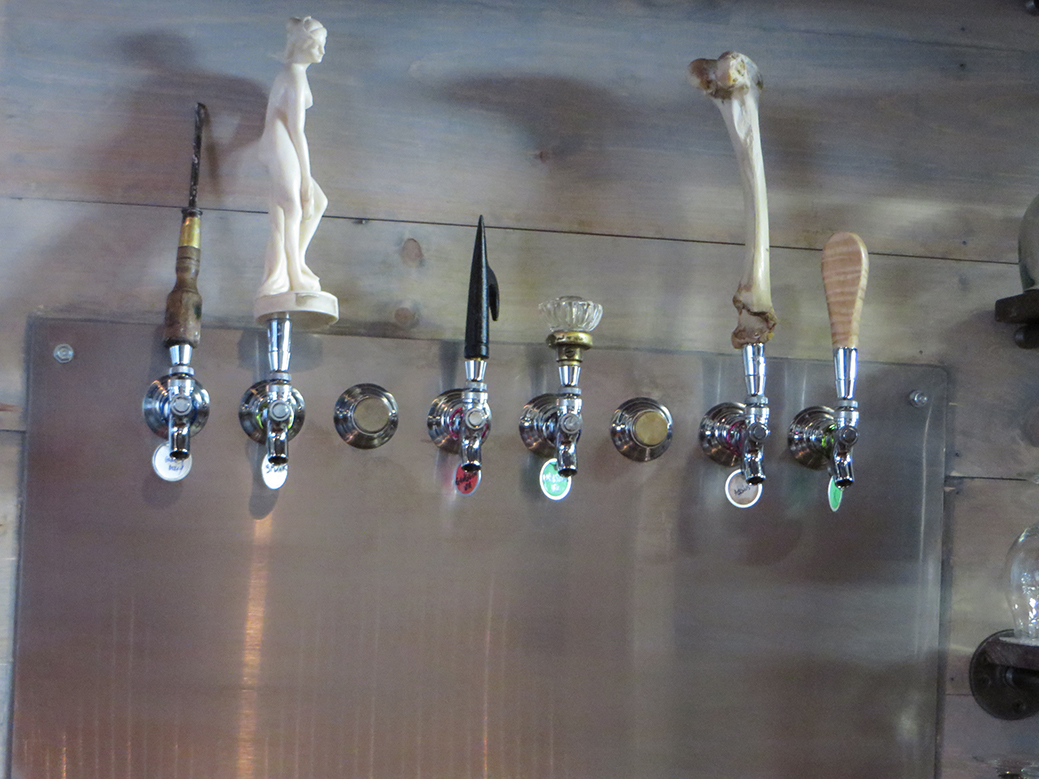 At some point last year, I figured out that it was possible for us to visit our 900th brewery on our 25th wedding anniversary. For beer travelers like us, nothing could be more romantic. With this idea stuck in my head, the challenge became making it happen.

On the eve of our silver anniversary, we woke up in Nashua, NH. Somewhat out of the norm for our beer travels, I planned a leisurely day that would end in Portland, ME. And with the first brewery visit in Nashua itself, we even had time for a pleasant walk through the town’s park, Mine Falls.

Despite the relaxing start to the day along the Nashua River, there was a nervousness in the air. Well, at least I, as the planner, was nervous. To reach 900 breweries the following day, Merideth and I needed to visit all breweries on the day’s itinerary. There was no wiggle room, no plan B breweries to visit if one was unexpectedly closed. Something often goes awry on our travels and this day had to go perfectly.

With that air of tension of what our day would hold, we finished our walk and drove the few blocks to downtown Nashua and our first beer stop of the day, Martha’s Exchange.

Despite the slight tinge of heat and humidity we passed on the air conditioned brewpub and chose a well-shaded table outside. With lunch plans already sorted, this was just a taster flight stop, which we quickly ordered.

Eight samples were soon in front of us. One of the more diverse set of beers we have tried recently, the octet of brews ranged from Volstead ’33’, a Golden Ale, to Velvet Elvis Vanilla Stout. In between there was an Alt, Saison and requisite IPA to name a few.

It was probably the weather talking but the refreshing, easy drinking Golden Ale stood out for me. The hopping reminded me of a German Helles, a style I really love. For Merideth, the peppery, dry Consortium Saison was her standout.

Eager to press on, we didn’t dawdle once we finished our sample flight. We quickly left Nashua in the rear view mirror heading across New Hampshire.

For those who know of our previous New England travels, lobster and especially lobster rolls are as important as beer. Heading towards coastal New Hampshire on our way to Maine, it was time to indulge in our second passion.

Despite its touristy appearance, pre-trip research pointed to the Beach Plum in Portsmouth as the stop for our first lobster roll of the trip. Its location on our route and award-winning lobster rolls made it an easy choice.

Choice confronted us as Merideth and I stood in front of their extensive menu. Six versions of lobster roll were available including a 20oz., foot-long monster. Romance aside, we decided on the non-sharing route, each choosing the 10oz. version. Same amount of lobster meat, no competition or hurt feelings.

Preferring our lobster rolls naked, the light coating of mayonnaise was distressing to see at first. But they were quite yummy and were a worthy first roll of the trip.

It was a short drive up the road to downtown Portsmouth and maybe the surprise brewery of the trip, Earth Eagle Brewings. While I sorted the parking situation out, Merideth went into the tiny tasting room and ordered the six beer sample flight. When I finally sat down to sample, Merideth was already several tastes in.

Grabbing my first taste, Sputnik, a Pale Ale, Merideth said something about gruits. Not a gruit guy, I didn’t really pay attention until she added that three of the six samples were of the hop-free variety. Never having tried three gruits at once, curiosity got the best of me. Ignoring the two IPAs (which ended up both being excellent), I delved into Barelyberry, Exhilaration and Birthday Boy.

Though not a fan of the style, I could still appreciate the quality that went into the brews. I also liked that they had a forager who gathered the herby ingredients. The latter two were more what I associated with the style, earthy and herbaceous. The first, Barelyberry,  Merideth’s favorite in the set, as its name suggested, employed blackberries in the brew.

A candidate for beer of the trip was not in the sample flight. Madame Trixie, their current barrel release, was a Blood Orange, Black Pepper Saison with Brett. If that wasn’t enough, Madame Trixie was aged in Allagash Curiuex barrel for 14 months. A sucker for beers with black pepper, despite what all was going on in the brew, it all worked together deliciously well.

Crossing over into Maine, we found the final new brewery of the day in the beachside town of Wells. Hidden Cove Brewing at Fire N Brew didn’t open for another hour. Confidence was high that it was opening, so that stress I had been feeling all day went away. With time to kill, Merideth and I backtracked to Wells Beach Mini Golf.

It was a beautiful Maine afternoon for a round of mini golf. Unlike previous times we have played, Merideth rode a strong short game on the front nine to finish +2, a surprising seven stroke lead over me. Her only mistake was to hit the ball out of bounds, a one stroke penalty. This was to prove costly.

The back nine played more true to form with myself slowly eroding Merideth’s sizable lead. My par and her bogey on the last hole sealed my comeback, both of us finishing with the identical score. Despite our normal competitiveness, we thought it quite romantic on the day before our 25th anniversary.

Back to Fire N Brew, we bellied up to the bar and chose four beers, Summer, Scully, A’Rye and Crowsfoot, from the five offerings for our sample flight. First things first, Merideth and I each grabbed a sample glass and toasted the important goal of the day being successfully completed.

Eager to get to Portland to watch the USA v. Ghana World Cup match, Merideth and I didn’t really dwell on sample flight. Our loss, since Hidden Cove was doing some interesting things in the brewhouse with local ingredients and wild yeasts. We’ll give it a proper visit on our next trip to Maine.

In Portland, I was finally able to let my hair down. After catching the inspiring USA victory over Ghana in the Old Port, we moved on to our traditional activities. First up was a lobster roll and Allagash White at J’s Oyster followed by a Maine Beer Company nightcap at Novare Res. A great ending to a productive day!

View all the images…

3 Replies to “Setting Up For Our Big Day”