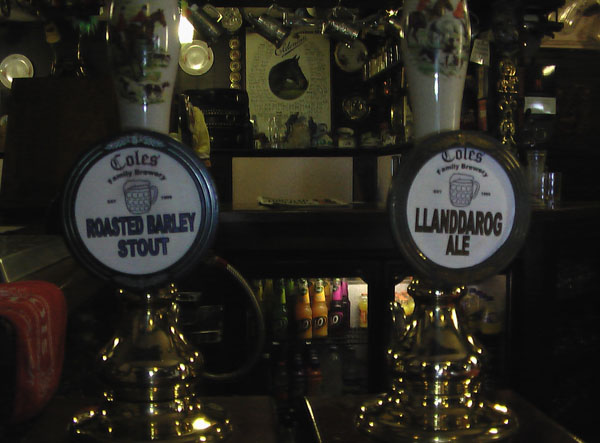 Our last two days in Wales we tried to reach our goal of adding 12 new breweries to the list. We had plenty of targets but craft beer traveling in Wales is not the easiest thing to do.

Geography was our first challenge. While Wales looks small on a map, due to the road system, distances take much longer to cover than what we are used to in the States.

The second issue – and I really don’t want this to sound too critical – is that Welsh breweries are just not used to people walking in to try their beer. Whereas in the States, many breweries created their following with an open door policy, this idea hasn’t caught on with some Welsh breweries. We were told outright by one brewery that they were too busy to have two people stop by. And then there was the Conwy experience where we were actually standing in the tasting room and couldn’t get anyone to come out front.

And lastly, some of the breweries are just plain hard to find. 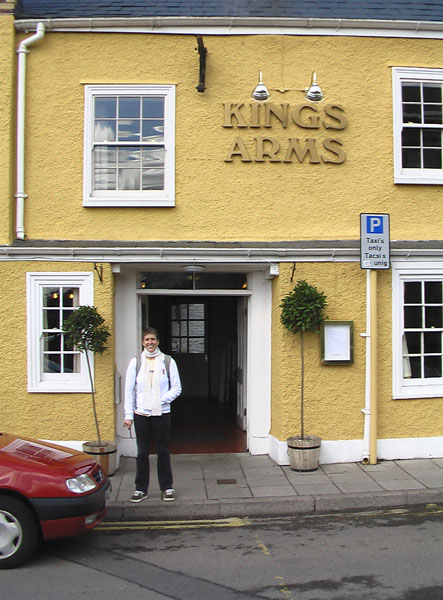 Tuesday started with a short drive to the market town of Abergavenny, home of Tudor Brewing located in the Kings Arms. Abergavenny’s ‘retail’ market was going on and we couldn’t find any parking. We cruised two car parks for 30+ minutes when, as we were just about to give up, the miracle happened; a lady was pulling out. Not only did we get her spot, but she also gave us her parking ticket which still had a couple of hours on it.

Once we parked, the Kings Arms was pretty easy to find and we were soon trying their beers in their pleasant bar. They had two available, Sugarloaf, an amber beer and Skirrid, a dark beer. While the beers had potential, they seemed very green and probably could have used some more time in the cask to mature.

Next, we were off to Merthyr Tydfil (‘Myrtle Turtle’ in our version of Welsh) to find Rhymney Brewery. We never found it. We cruised around the industrial park a couple of times looking for signs of brewing activity. Seeing kegs is always a good sign, but we saw no indications of brewing. We found out later, the brewery is not sign posted and was located behind the tire place. I remember seeing the tire place. 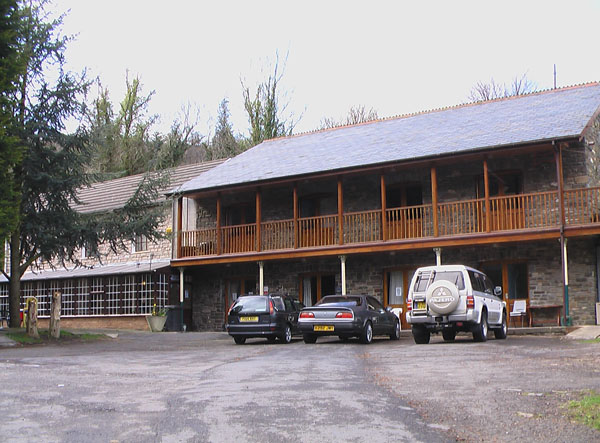 Moving on, our next stop was Dare Valley Brewing at the Falcon Inn in Aberdare. Not only did we have a Google map printed out, Buster also gave us directions the night before.  Located in a valley next to a brook below the town, it still took us an hour to find.

We drove up a narrow city lane that we thought would get us to the inn. In reality, the road we intended to turn down only existed on our Google map. After seemingly endless searching, we finally turned down a road that had a dead end sign on it… the Falcon Inn was at the end of the street. 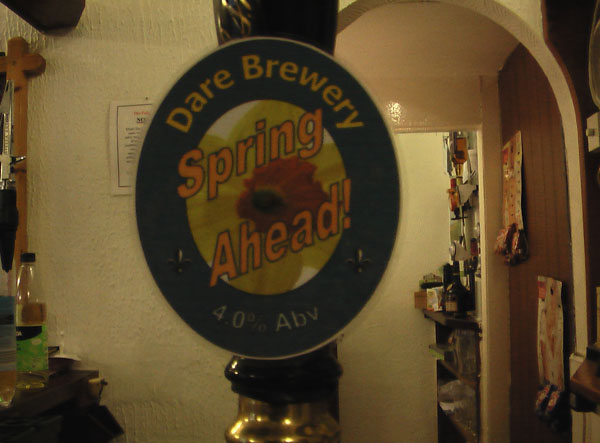 It was a good thing we persevered. A family operation, they were the nicest people. After a short brewery tour, Richard, the brewer, sat with us. He poured us his beers to try and we sat with the family for an hour or so talking beer.

We tried four beers, including the seasonal Spring Ahead on cask, and all were very nice. The highlight was a 3.8% Stout that was a stunner. The Stout was a beer brewed under contract for someone else, but Dare hopefully will have their own version some time soon.

Having spent most of the day trying to find breweries, it was time to close out Tuesday. We headed back to Brecon and stopped by Breconshire to have a few more beers with Buster.

Wednesday, we drove to the coast in preparation for sailing back to Ireland the next day. First stop was Black Mountain Brewery at the Telegraph Inn in Llangadog.

My best piece of advice for beer travel in Wales is to target the breweries that are located in inns. They will have normal hours and food. This advice served us well except for Black Mountain. We arrived at a bit before noon only to learn they opened at 3pm. 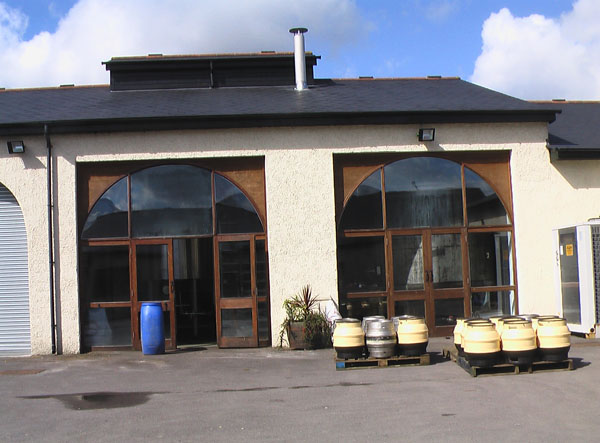 The next stop was up the road in Lladeilo, Wm. Evan Evans Brewery. Walking into the brewery yard, we met Simon, the owner, as he was leaving. Very personable, Simon was more than happy to get one of his brewers to show us around. After a short brewery tour, we were in their office kitchen trying their flagship beer Cwrw. Pronounced ‘curu’, it is the Welsh word for ‘ale’; what a great marketing idea. “I’ll have a cwrw, please”.

A premium bitter, Cwrw was one of my favorite beers of the trip. It had a very American-like hop presence, reminding me a lot of Galway Hooker IPA from Ireland.

We would have never found Ffos y Ffin Brewery in Capel Dewi if Buster hadn’t given us directions. Driving into the tiny village, we were told by Buster to take the first left up this country lane, then a right down another country lane. At a certain point we would see the brewery marked only by a cask out front. Lo and behold we found it!

Arriving right as one of the two owner/brewers, Glen was leaving to make a delivery, he was more than willing to delay his departure a few minutes to allow us to try the beer. We tried three and I have to admit I didn’t take any notes or snap any photos because I didn’t want to take too much of Glen’s time. The beers were nice and we got 4 bottles to try when we get home. 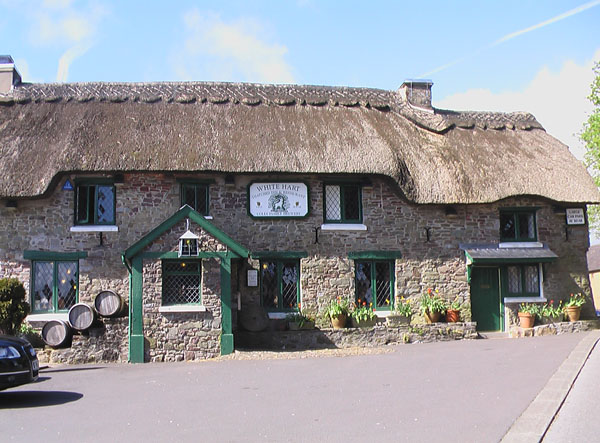 The last brewery of trip, Coles Family Brewery was located at the White Hart Inn in Llanddarog. In a country where we found it hard to find some breweries, White Hart Inn was the only brewery on our travels that was signposted from the main road. It was very easy to find. 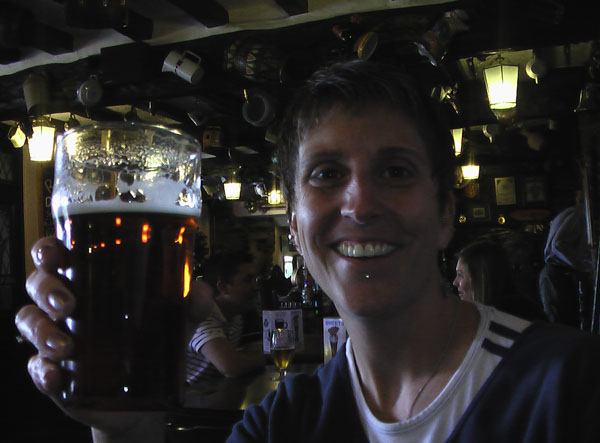 They had two house-brewed beers available, an Ale and a Stout. Another Welsh Stout! If there was any surprise of the trip, it was the number and quality of Welsh Stouts I tried. Their Stout was another low ABV, high flavor brew on par with the other wonderful Stouts I had tried in the previous days.

That was it. Our Welsh beer adventure was over. We only added nine breweries to the list, three short of our goal. Despite the challenges, the quality of beer and the hospitality of its people has us already thinking about our next Welsh beer adventure.