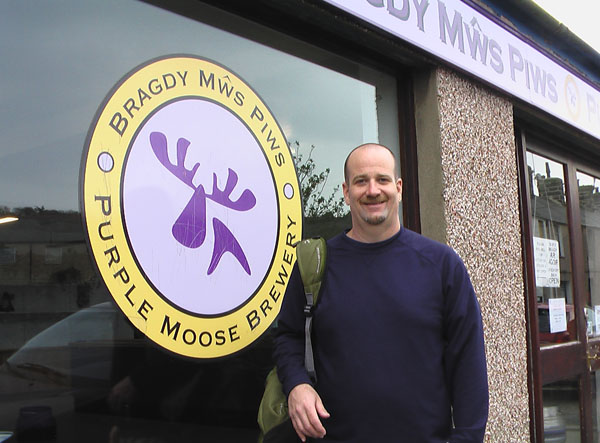 On Monday, we headed south to explore other parts of Wales. On the journey, we had a couple of breweries to visit before reaching our final destination and attending the opening of Cask Ale Week.

First stop was a short drive from our village to Porthmadog, or as we called it in our own version of Welsh ‘Port Mad Dog’. Porthmadog is home to the Purple Moose Brewery, one of the newest breweries on the Welsh scene. Our visit wasn’t the earliest recorded brewery visit but it might have been the shortest. 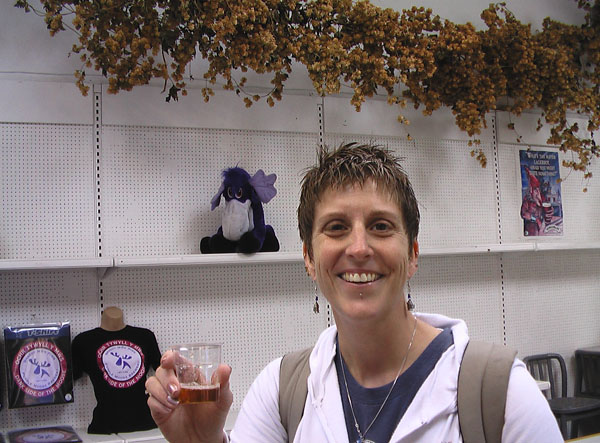 Purple Moose had two beers available to taste, Dark Side of the Moose, a dark Ale, and their Easter Ale. Served in little medicine cups, both were very nice. We gulped down our tastes, bought some Dark Side and departed. Five minutes of our day was thus completed.

Then it was time to head south in earnest. Already handicapped by being on the other side of the car on the other side of the road, I heard this deafening roar from behind that was approaching quickly. Within a half a second, a RAF fighter appeared in front of us doing high speed, low altitude maneuvers. Definitely something my nerves did not need. We learned later that the RAF uses Wales for flight training.

After being targeted by the RAF, I definitely needed a beer – a full beer – not something dispensed in a medicine cup.  Relief was provided by the Heart of Wales Brewery housed in the Neuadd Hotel in Llanwtryd Wells (We never translated the town name into thebeergeek.com version of Welsh).

Situating ourselves in their cozy lounge room, we enjoyed a nice fire and a couple of house brewed cask ales. Of note was Aur Cymru (Welsh Gold) a Golden Ale brewed with cascade hops and Welsh Black, a 4.4% Stout. We still get a kick out of the ABVs of the beers over here because things are kind of out of hand in the States. Both beers, despite being in the low 4s, had great flavor and depth. 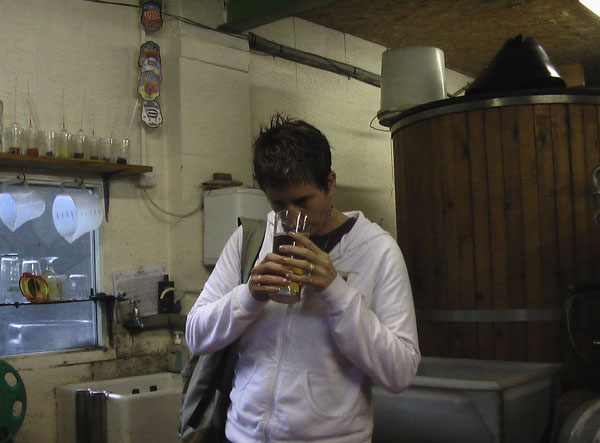 Nerves calmed, it was on to our final destination of the day Brecon, home to Breconshire Brewery. I give kudos to myself for my beer networking. I contacted a few UK-based beer people and asked for Wales recommendations. One name I got was Buster Grant who is the brewer at Breconshire and the chairman of the budding Association of Welsh Independent Brewers.

Buster gave us a warm welcome to his brewery and we tried a number of his beers over a couple of visits. All his beers are made with UK ingredients and my highlight was Night Beacon, a 4.9% Stout brewed with some smoked malt. 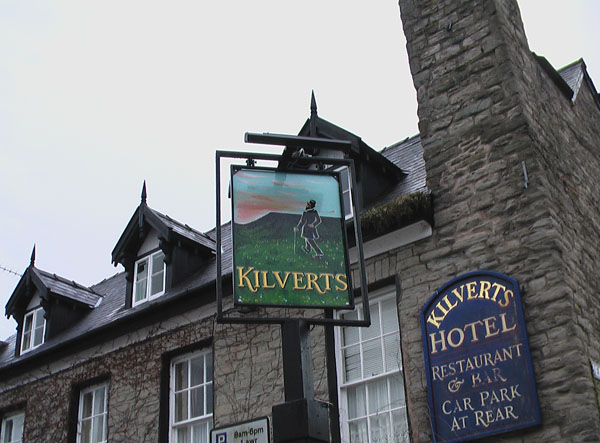 The main event of the day was the opening of Cask Ale Week at Kilvert’s in Hay-on-Wye. Joining Buster, his missus and a friend on the bus, we headed over to the bookstore capital of the world. Hay boasts something like 40 bookstores with a population of 1,300.

Cask Ale Week, April 6-13,  was the brainchild of a number of people and is based, I think, on the successful (Insert City Name) Beer Week model from the States. The goal was to recruit a million new cask ale drinkers. As someone who recruited events for SF Beer Week, I applaud Kilvert’s for scheduling a number of events during Cask Ale Week. 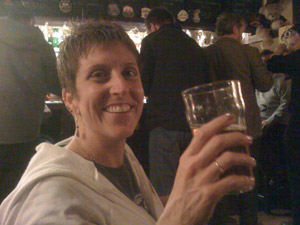 It was a great evening of cask beer, chatting and meeting new friends. The local MP even bought us a beer. A politician has never bought us a beer before! Merideth got behind the bar and pulled her own pint of Kilvert’s Ale, a beer brewed for them by Breconshire. Kilvert’s was also presented with CAMRA’s Local Pub of the Year honors, an award well-deserved from what we could see.

With a full day put in, we retired to our comfy four poster bed at the Griffin for some much needed rest.