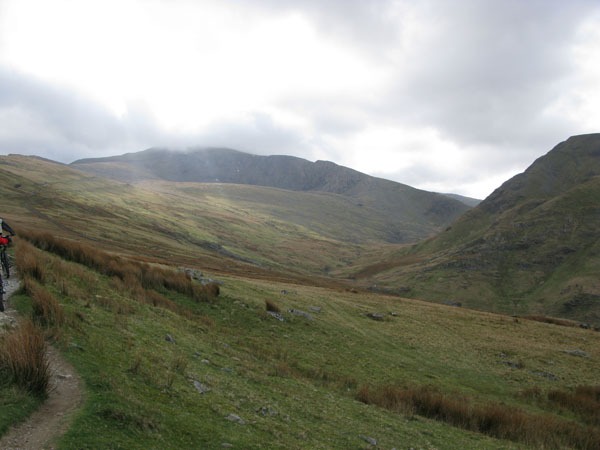 Sunday was the day we climbed the highest peak in England or Wales, Mt Snowdon. It’s height, 3,560 feet, doesn’t sound that impressive, but Snowdon is where Sir Edmund Hillary trained for his climb of Everest. We were told it was ten miles and a six hour round trip.

There a number of trails to the top but we chose to go up the Llanberis trail, a trail the parallels the steam railway. Steffan, the owner of Pen Ceunant, let us park at his cafe. Not only did save the walk up a steep hill from the village but we also knew there was beer when we returned. 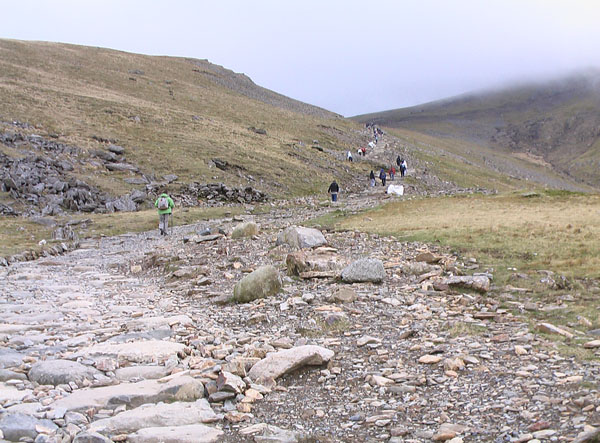 We were on the trail at half past ten joining a small crowd of hikers, runners and mountain bikers with the same aim in mind. Well, I am not sure about the beer part.

The weather was bearable, temperatures in the high 40s/low 50s with a mixture of clouds and sun. As we set off in the cool morning, I was reminded of what a hiker told us the day before at Cwellyn Arms; dress warmly because it is really cold and windy at the top. This then reminded me of the conversation Merideth and I had in the car on the way to the airport. Merideth said she forgot her gloves which I replied that I thought about bringing them but decided not to because it was going to be warm. Oops. I forgot to take the Snowdon climb into account. 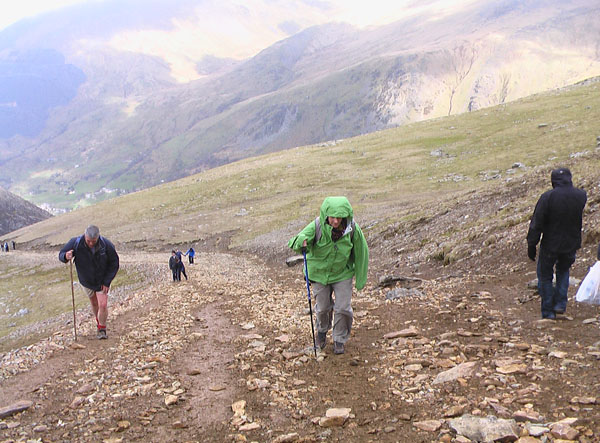 The trail was very similar to Croagh Patrick. All rocky with smooth rocks towards the bottom and looser stone at the top. As the trail got steeper, which it dramatically did just past the Halfway Cafe, the number of hikers thinned out. The wind also picked up and the temperature dropped. We could have used the gloves right about now.

As we began the last great stretch uphill, we did meet an American woman who went to graduate school at Berkeley. She noticed my bear tattoo as she was passing us and we stopped and chatted for a few minutes. Besides being a much needed rest, she told us about a number of other hikes in the area including a 35 mile, 15 peak extravaganza that a hiker apparently does in one day. Judging by the speed in which she continued up Snowdon, the 35 miler didn’t seem to faze her as extraordinarily difficult. Only moderately so. 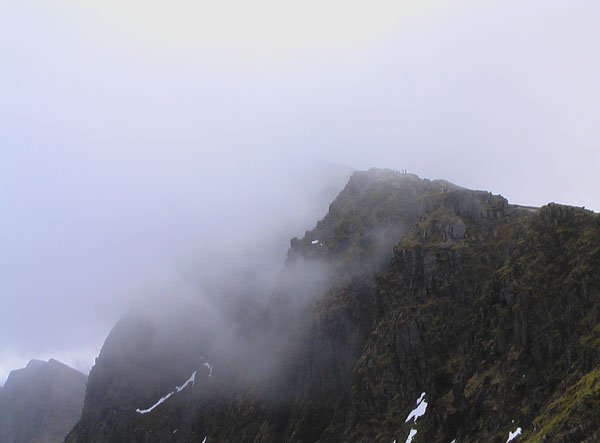 As we got a few hundred yards from the peak, our trail was joined by another and a traffic jam ensued. If our trail had been busy, the one that joined us, the Miners trail, looked like a single file line of hikers, one after another. Having so many people with the same goal wasn’t going to lessen our achievement, but we were dumbfounded by the number of people. If it was this crowded in April, granted it was a holiday weekend, what would it be like in high summer? We jostled our way up the last stretch pinballing off fellow hikers going both directions. 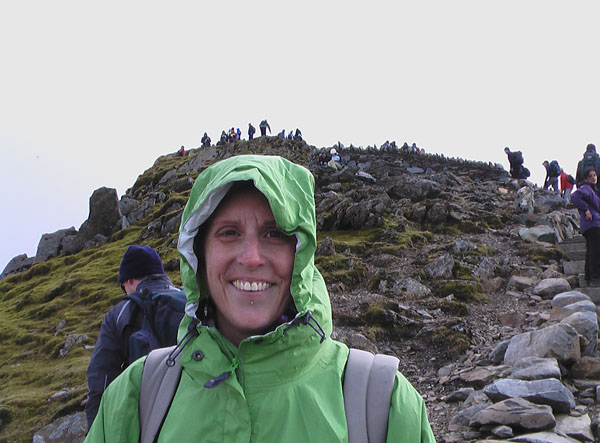 We reached the top, joining several hundred other hikers, first in resting and then checking out the pinnacle. Just like when we climbed Croagh Patrick, the cloud cover was thick. On a clear day, one can see Ireland from the Snowdon summit. We could barely see the next peak. The lack of gloves somewhat hampered our time on the summit as our hands were quite numb at this point. Plus, there was no beer so with pictures of our accomplishment taken, it was time to head back down the hill.

Four and a half hours after we started, we were back at Pen Ceunant enjoying Welsh hospitality; Homemade scones with jam and cream and Welsh craft beer. We were quite pleased with our accomplishment. All that is left is the highest peak in Scotland and we will have conquered the peaks of the British Isles.