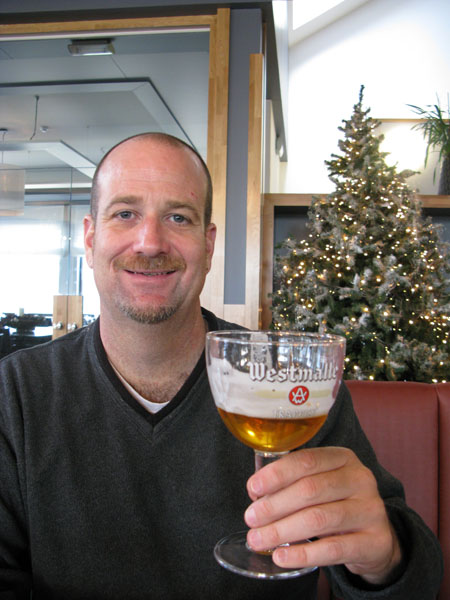 We had two main goals for this trip; to visit all seven Trappist breweries and to both reach 450 on our list of breweries. Well, I am happy to report that we reached 75% of our goals.

The part we fell short on was that while I reached 450 breweries, it looks like we will return to the States on Monday with Merideth stuck on 448. Some conspiracy theorists will think I did this on purpose, but the blame all rests on the shoulders of Brasseries Caracole and Bouillion for having messed up winter hours. It was always in the master plan for both of us to reach 450.

We left Bruges Friday mid-morning driving east across foggy Belgium headed to the largest of the Trappist breweries, Westmalle. They are famous for having developed the Dubbel and Tripel styles of beer. Merideth successfully navigated us around Antwerp and to the door of Westmalle’s very fancy brewery tap, Cafe Trappisten, only 12 minutes behind schedule. We would have been only nine minutes behind schedule if we hadn’t wasted those precious three minutes driving around the Abbey even though we had read that the Trappisten was across the street. 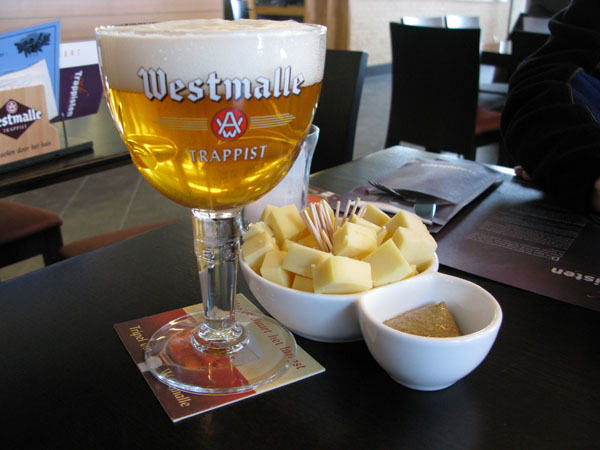 Westmalle was my #450 so I was pretty excited. We quickly found a seat in the massive dining area and ordered two beers, Dubbels.  They also have a weaker beer called Extra that is brewed for the brothers. Only rarely does it make an appearance in the brewery tap and today was not one of those times. So we stuck with the Dubbel and Tripel and resisted the temptation of adding grenadine for an extra 30 euro cents.

The Trappist breweries also usually make cheese so on each occasion when there was an opportunity to try the cheese, we took advantage. The Westmalle cheese came with mustard that was super hot, just the way we like it. Unfortunately, it didn’t come with celery salt, also how we like it. 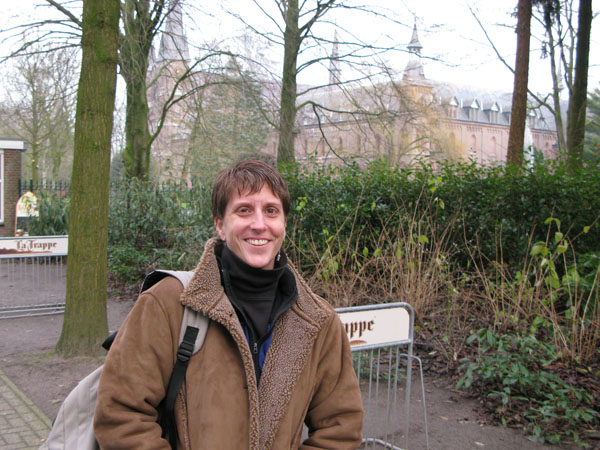 Having had our fill of monk beer and cheese for the moment, it was time to move on. I was concerned about the time as we had only a small window of time visit the seventh and final Trappist, Koenigshoeven. Their winter tasting hours were a scant three hours in the afternoon.  So leaving Westmalle, we drove the 50 or so kilometers across the Dutch border and easily found the Abbey Koenigshoeven in the outskirts of Tilburg.

Unexpectedly, we saw the biggest crowds at the Trappist breweries that we had seen on the whole trip. Two different tour groups of 20 or so arrived and battled with our peace and quiet for supremacy. We also had some filming to do so the din of a tour group is never good. 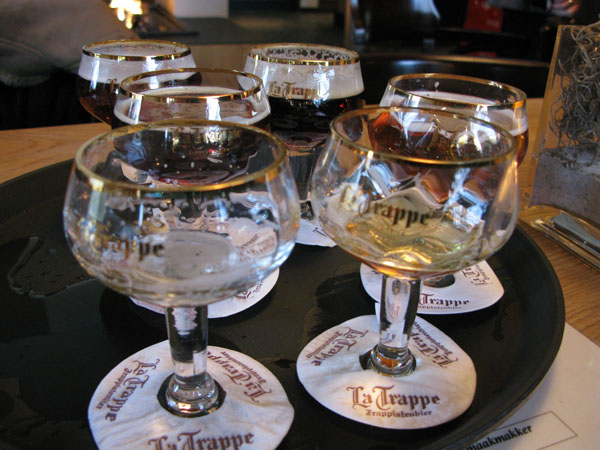 Known as La Trappe in Europe, they had six beers beers to try. I noticed that the one loud group was getting taster sets, which was perfect for us. So, I asked for one. And the beers came in these cute little 25cl glasses.

We tried their Witte, Blonde, Dubbel, Tripel, Bock and Quadrupel. And of course we got an assortment of their cheese, too. While their beer cheese might have been our favorite Trappist cheese of the trip, their beers were my least favorite of the Trappists. They were good, but I guess I am just a Belgo-phile now. If it isn’t Orval, it is crap!

So, that was it… we visited all seven Trappists and added six of them to the “the list”. Now, we return the car and get ready for the last phase of our trip, the Kerstbierfest.

One Reply to “We Reached Our Goals… almost…”