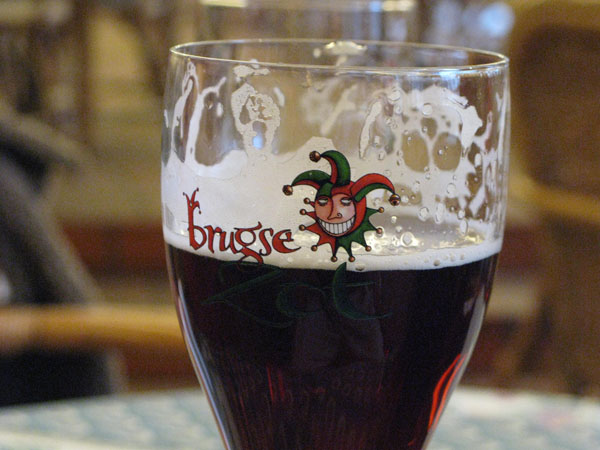 Thursday was the one day that Chris and I had to explore Bruges. We love the movie In Bruges and we wanted to look for the locations of some of our favorite scenes. But first, we went on a tour of the only brewery left in Bruges, Halve Maan. The tour guide accommodated the decent sized group of English speakers, the large group of Dutch speakers, and the two French speakers all during the same tour. Chris and I weren’t sure if it was her command of English or her delivery, but the guide had a hugely dry sense of humor. I’m not sure we saw her crack a smile, even when telling her funniest jokes.

One of the best parts of the tour was when she explained the use of hops in the brewing process. She explained that hops is related to marijuana and that is why it gives us the ‘kick’ in beer. Each time she said ‘kick’, she did this gesture with her hands indicating brightened eyes. Again, a dry delivery, but very funny.

Next we stopped for some lunch at a place called Dickie’s. Dickie is the dachshund after whom the place is named and the primary reason we went there. They also have a great beer selection. 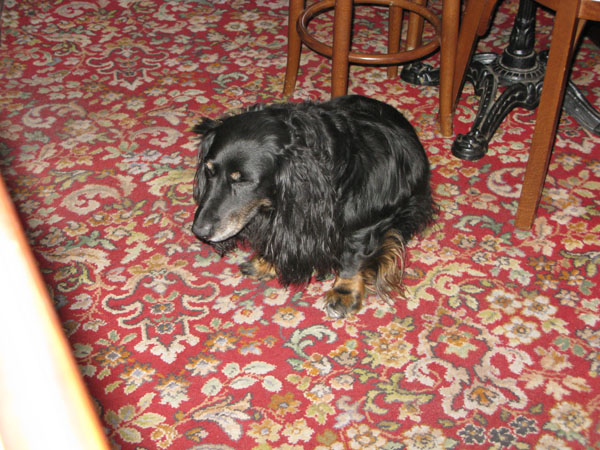 Children here, as in many parts of Europe, come home from school for lunch. When we arrived, the family was having lunch with their daughter and Dickie greeted us with a hugely deep bark. We couldn’t see him, but the deep bark told us that he was a standard wiener. Chris moved in for a closer look at Dickie, but was politely told to stand back because otherwise he will never stop barking. A bit later, Dickie made his appearance at our table before lying by the fire with his family.

Lots of beer with little physical activity can take its toll after a week, so we decided to head to the Bell Tower. We climbed the 200+ stairs to the top and yes, the stairs get very tight toward the top. As we were going in, a man told us in between his huffing and puffing that it wasn’t worth it. I thought it to be the rantings of someone exhausted from all the climbing. However, I did find the top a little disappointing. It was so high that you could not look down into the square. Chris wanted me to jump off the tower like in the movie, but there was a screen to prevent such re-enactments. Don’t worry, I had no intention of doing it anyway. 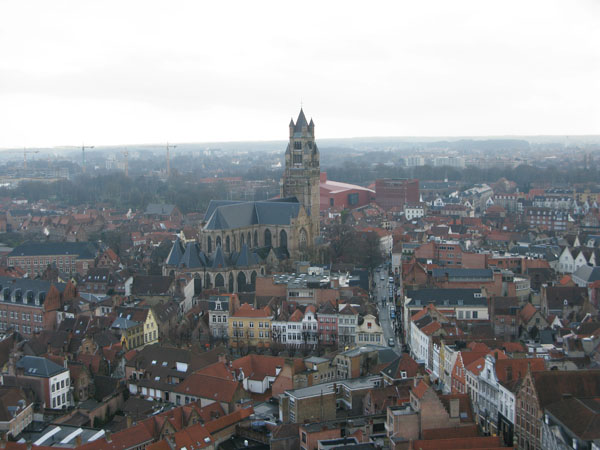 One of the churches in town has a Michaelangelo statue of the Madonna holding Jesus. Apparently, it was purchased and brought to Bruges during his lifetime, which made it one of the few Michaelangelo’s located outside of Italy at the time. We looked at it, shrugged, and moved on.

I also wanted to find the Basilica of the Holy Blood. Supposedly during the second Crusade a vial of Jesus’s blood was brought back. Once in the church, we actually weren’t sure where the blood was supposed to be. The primary problem was that it didn’t seem to look like the movie and so we got thrown off. After consulting the Rick Steve’s book several times, we determined that the vial was inside of this huge silver tabernacle on a side altar. On Fridays and other special days, the tabernacle is opened and everyone can peer in to see the vial. I guess we’ll try and go on a Friday next time. 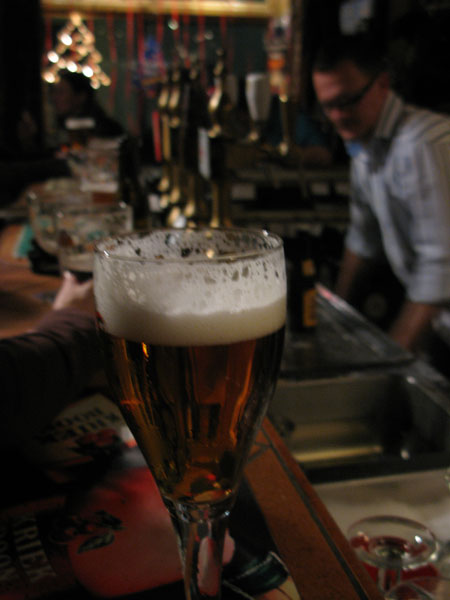 Because we didn’t get to try quite all the beers, we went back to Brugs Beertje. Unfortunately Daisy wasn’t there. It was her day off we were told. I was happy that we got to see the famous publican when we were there on Tuesday night. It really made the experience (and not only because she gave me a stuffed bear). We had a great time this time, too, trying more new beers. One of the guys from the other night was working, so he helped us out with recommendations. He had a very good American English accent and it turns out he had a girlfriend in Maryland. He also spoke 4 other languages! Sometimes I can barely manage to master the one language I know fluently.

Zolder is the name of a cellar bar that was mentioned in the Good Beer Guide to Belgium, so we wanted to check it out. It was very cool and had a good beer selection. There was a recent change in ownership, the previous owners retired, and now a young couple, she Irish and he Belgian, are making a go of it. It seemed a bit slow on the night we were there, but cozy and we enjoyed listening to John Lee Hooker. It was a refreshing change from the DJ-matic playing cheesy pop songs. That is a tough thing to do, taking over a business in the off season, so we really wish them luck. Be sure to stop in there the next time you’re in Bruges. We had a beer and a ham and cheese toastie before moving on.

We finished off our night with a walk back to our hotel. But along the way we stopped to watch some outdoor ice skating. Well, no one was actually skating, just one of the workers was fooling around on the ice. Chris wanted to skate, but as it turns out, it was closed for the night. We had our Belgian waffles with caramel sauce and went to bed. 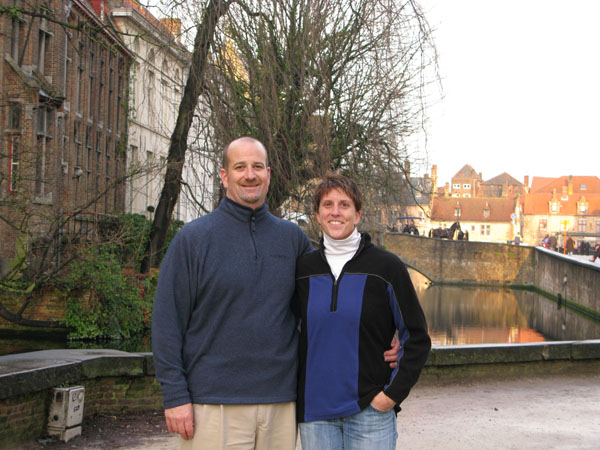 2 Replies to “In Bruges”