So we returned to the City for the second straight weekend, this time for a 21st Amendment beer dinner put on by our friend Bruce Paton (the Beer Chef).

It actually was a very busy beer weekend in the Bay Area with the IPA Festival going on at the Bistro over in Hayward, Bruce’s dinner and 20th anniversary happenings going on over at Toronado. I commend the people who made it to all three (Jay!) and will say that we did make it over to Toronado after the dinner.

We started our day in San Francisco by returning to City Beer. When we find something we like, we will return again and again.  And we like City Beer. We had another great afternoon enjoying good beer and we met some very nice people.  I also had my first Sierra Nevada Anniversary Ale which was very good but it didn’t change my life like I thought it would. We filmed a short interview with Craig and I hope to have that up in the next few days. 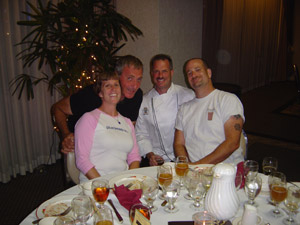 It was Bruce’s 57th beer dinner and I am sad to say that it was only the first one we have been to.

You can’t get much better beer than 21st Amendment and Bruce’s menu was equal to the task. I especially enjoyed the IPA with the lamb appetizer and the porter with the chocolate desserts. I’ll pass on trying the Funk again.

It was nice seeing our Barclay’s friend Harry plus the young lady who sat next to us was Carmel Valley born and raised. Small world.

After the dinner, we walked over to Toronado but didn’t stay long because it was a mob scene. We did see some friends there too …

So, the two lessons from these ramblings are… go to City Beer. We can’t emphasize this enough. And try one of Bruce’s beer dinners. They are a lot of fun.