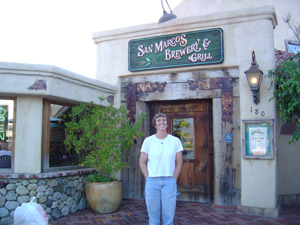 So I went on a quick trip down to the San Diego area yesterday and managed to get in a couple of beer adventures. First, I went to San Marcos Brewing in, what else, San Marcos. Had a taster set, which included an ESB and oatmeal stout on cask and chose the pale ale as my drink. I met our friend Pete from amateurgolf.com and his 6 year old son Lawson there for dinner. A lively time was had by all, especially Pete, who took a big sip of his ESB with an unhealthy dose of sugar supplied by Lawson. The waitress was kind enough to get Pete a new beer at no charge. The food was good, too, which made the whole experience fulfilling. Oh, and did I mention that my San Marcos Brewing visit helps me get ever closer to catching up with Chris on “the list”? 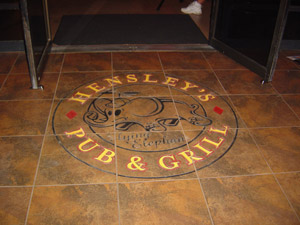 My next adventure with Pete, sans Lawson, was to Hensley’s in Carlsbad. Hensley’s is owned by Matt Hensley, former Flogging Molly accordion player. Matt was there and I was able to use my schtick of “I’m a friend of Ute and Wolfgang” as my opening line. He was very friendly and seemed to appreciate our business. From what he said, Matt is working really hard to get the place fixed up the way he wants. Cool memorabilia from bands like the Pogues and Madness adorn the walls and the crowd was very hip. Kinda felt like being at a Flogging Molly show. There is a music stage and Matt is fixing up a room that had darts. The beer selection looked good, including Irish standards of Guinness, Smithwick’s and Harp. We didn’t try the food since we just ate at San Marcos Brewing, but it looked good on other people’s tables. I encourage you to help Matt out and go to Hensley’s. It’s right off of I-5 in Carlsbad. If you see Matt, tell him “I’m a friend of Merideth’s, who is a friend of Ute and Wolfgang”. I’m sure that will guarantee you VIP treatment!