It seems like it has been a while since Chris and I engaged in the typical tourist things on our trips. So with more time to spend in London than we have ever had before, we decided to try to take in some of the sites. 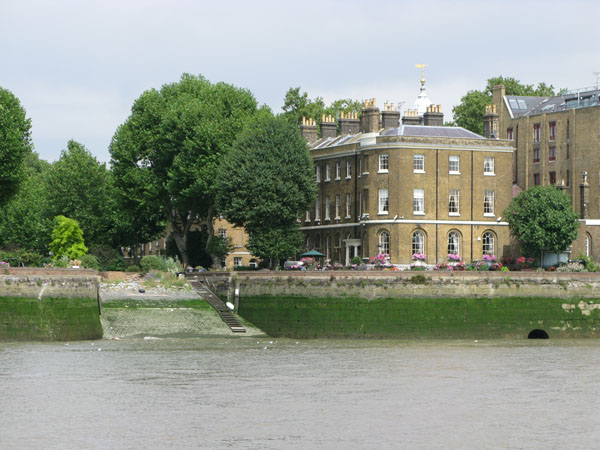 First, we took a boat cruise down the river Thames to Greenwich. The trip started with us standing in line with hordes of other tourists to buy our tickets. The trip took over an hour, as the captain drove slowly and provided a commentary on the sites. Despite feeling a little dorky, it was very enjoyable. The weather cooperated and the captain had interesting things to point out. My favorite was the pier where they chained convicted pirates and waited for the tide to rise. Apparently, the judge enjoyed watching them drown while drinking pints at a pub across the river. The pirates were left chained for at least two high tides to ensure they were dead. Very considerate. 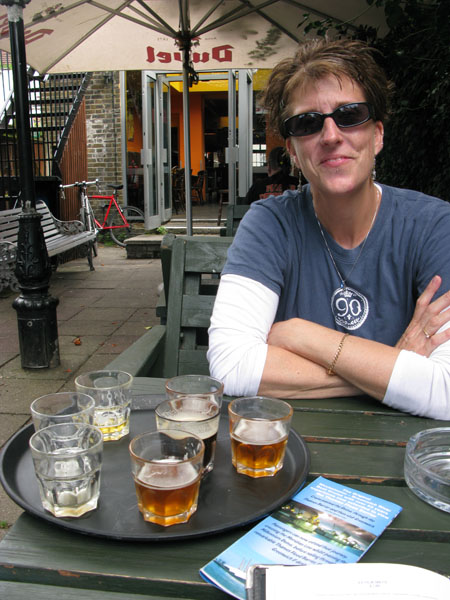 Once in Greenwich, we couldn’t resist our natural state so we reverted back to our ‘normal’ selves and walked 10 minutes up the street to two pubs that were recommended to us. The first, the Greenwich Union, is a pub for the Meantime Brewery. Unfortunately, no brewing is done at the pub so we couldn’t count it on the list. Along with the taster set and half pints, we had this lovely dish with potato cake, salt pork and a poached egg.

We also visited the Young’s pub, Richard I, which is next door to the Greenwich Union.

With a few pints under our belt, we went back to the tourist thing.

We visited the Royal Observatory, Greenwich. Located there is the clock from which we get Greenwich Mean Time. As we arrived, a tour group of older Russians was just leaving. However, still around were large groups of Italian tourists. Noticeably absent (on the whole trip actually) were Americans. It is just too darn expensive for Americans right now. 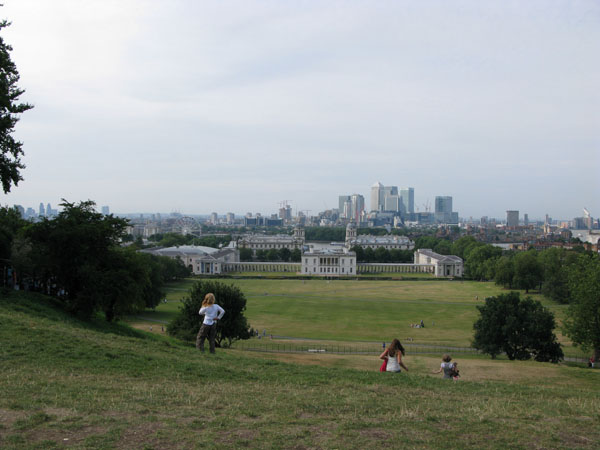 The view from Greenwich Park (location of the observatory) is fantastic and I would have liked to wander some more. However, we got a late start that day and the boat trip out there took a bit longer than we anticipated, so we only had a few hours to spend out in Greenwich before the last boat left. Unfortunately, we did not get to see the Cutty Sark, as it is currently being renovated.

Our Greenwich tip: Leave by mid-morning to allow yourself plenty of time to walk around. Be sure to venture away from the pier area.

The cruise turned out to be one of the more affordable tourist attractions. We had intended to visit the Tower of London on this trip. However, it was going to cost over $50 for the two of us! We decided the money would be better spent on pints in historic pubs instead. Based on suggestions from friends, we visited several pubs that we later found in our London’s Top 10 book. So some of the pubs we visited turned out to be tourist sites. 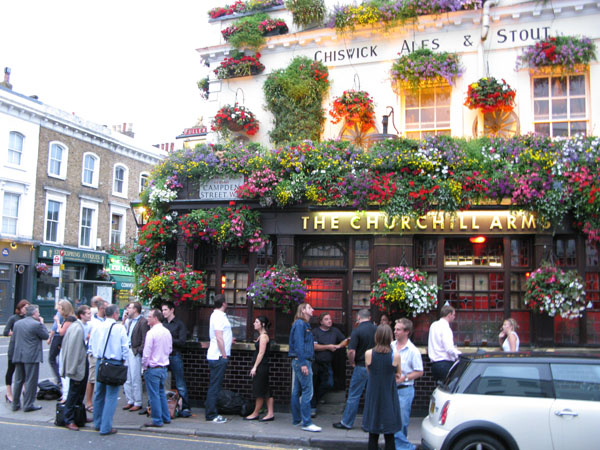 On the recommendation from several people, we went for Thai food at the Churchill Arms. It may seem like an odd combination, but Thai food in pubs is not so uncommon. The restaurants are usually operated by someone else, but located within the pub.

When we arrived at the Churchill Arms, it was packed. It took some hovering and vibing, but we eventually got a table. Then we began to notice that the place was crawling with Americans. We later saw it in a book of attractions, which would explain the high American count. The food was great and the pub did begin to thin out a bit as the time for food to end drew near. Table space was still premium, though, and our table was scooped up as soon as we lifted our rears off the chairs.

Our tip: In order to get a table to eat, try to get there before the after work crowd arrives. Don’t worry, the place will get hoppin’ in no time, but you’ll already have a seat. 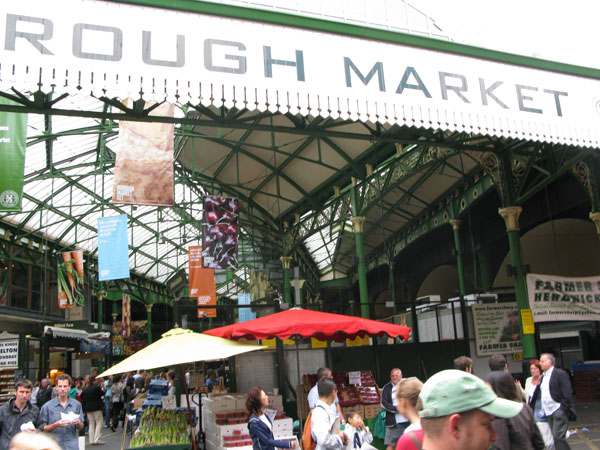 We also visited Market Porter next to Borough Market. We had a quick pint, then wandered the market. The market is phenomenal and we bought ham, cheese, cornichons and bread for our picnic lunch. We bought the cheese at the nearby Neal’s Yard Dairy and it was crazy good! The area was busy with tourists and business people alike since we were there during lunch time. We never knew that so many business people imbibed in the liquid lunch. 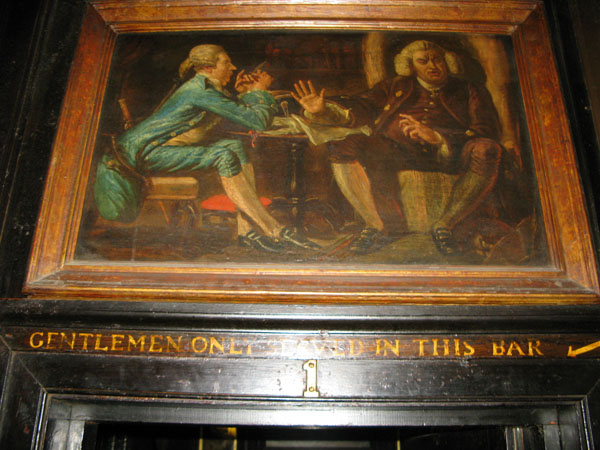 Cheshire Cheese and Ye Olde Mitre House are two other historic pubs we visited. Both were hundreds of years old and they seemed like mazes with multiple small rooms and narrow staircases. A person could especially get lost in Cheshire Cheese if they were trying not to be found. Cheshire Cheese had a cozy bar in the front with a cool old fireplace. And, it said “Gentlemen only served in this bar” above the door. They must not enforce that anymore because I had already ordered and drank my beer before I noticed it.

Our tip: When visiting Ye Olde Mitre House, be sure to wear your running shoes and a reflective jacket in order to safely negotiate the Holborn Circus roundabout. Go there and you’ll know what I mean. 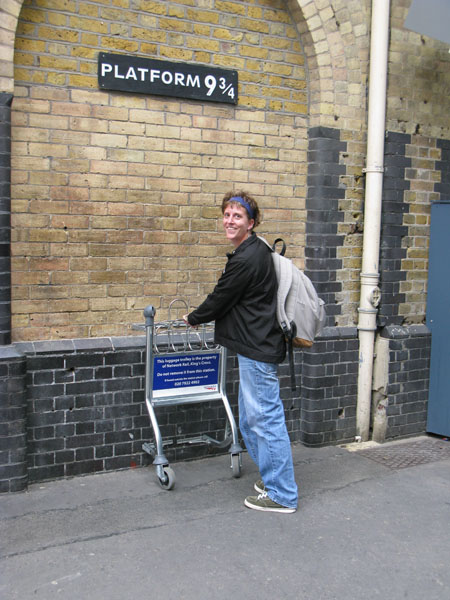 On Saturday, we met our friend Paul at King’s Cross Station to go to the North London suburbs. If you are a Harry Potter fan, you know that the train to Hogwarts leaves from platform 9 3/4. Lucky for us, our train was leaving from platform 10. I had to stand in line behind a bunch of kids, but Chris did eventually get a photo of me trying to get to Hogwarts. I guess it doesn’t work for muggles.

No real tip here. Not being big Harry Potter fans, we probably would not have made a special trip to it, if we weren’t leaving from the platform next door.

We contemplated a whirl on the London Eye, but in the end we didn’t go. It was later recommended by our 16 year old niece as something cool to do. Some friends also later informed us that Londoners get discounted tickets to the Tower of London and they could get us some for our next trip. The Tower of London was also highly recommended by our niece.  So, we’ll plan to see those tourist sites next time.