Thursday was our day volunteering at the Great British Beer Festival. Pulling pints was something we looked forward to – we were just worried about the ‘money issue’. 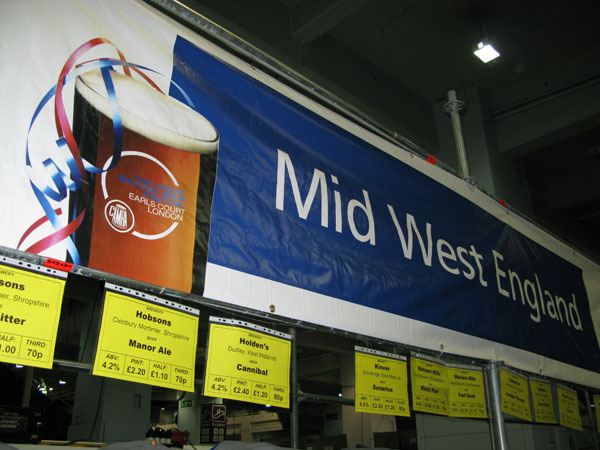 At GBBF, the volunteers also take the money. So, combine a strange currency with varying prices and no cash register – just a till – and you get a bit of anxiety. Could we do this?

We duly showed up at Earl’s Court staffing office at the requested hour, 10am. Well actually, we were there a bit early. Asked what we wanted for a job assignment, we passed on steward, and whatever other job there was and said we wanted to pour beer. We were assigned to area B5, Mid West England. If you are unfamiliar with this region of England as we are, it includes the counties of Staffordshire, Worcestershire Shropshire and Herefordshire.  To throw out some brewery names… Burton Bridge, Enville, Hanby, Hobsons, Old Cottage, White Shield… 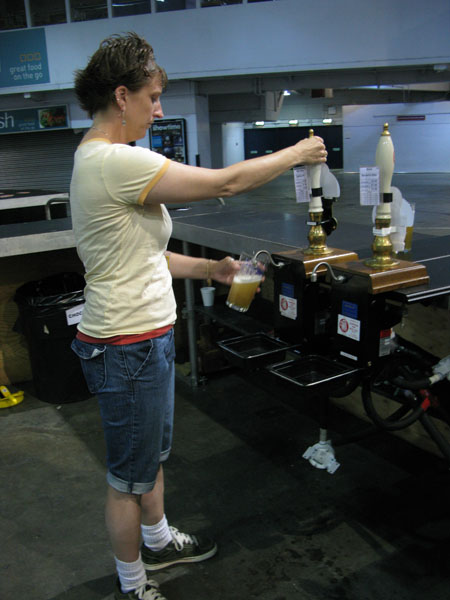 After donning our bright yellow vests – forklifts were still flying around the convention center floor – we headed  downstairs to B5 to meet Zippy, our bar manager.  After explaining to us the evacuation route, he quickly went down the line and gave a brief description of the 20-odd beers that we would be pouring: milds, bitters, best bitters, porters and stouts.

Then we spent almost two hours sitting around reading the tabloids because the festival didn’t open until noon. We also had a chance to meet our fellow staff and we particularly enjoyed chatting with Les and Des.

Noon finally arrived but because we were situated in the back part of the hall, it would take a few moments for the crowd to sift back towards us. However, we were guaranteed a busy day because the Champion Beer of the festival, Alton’s Pride from Triple FFF was in B6, the section right next to us. We were certainly going to get some overflow.

I pulled my first pint about quarter past the hour and we were off and running. I think it was Slater’s Top Totty. 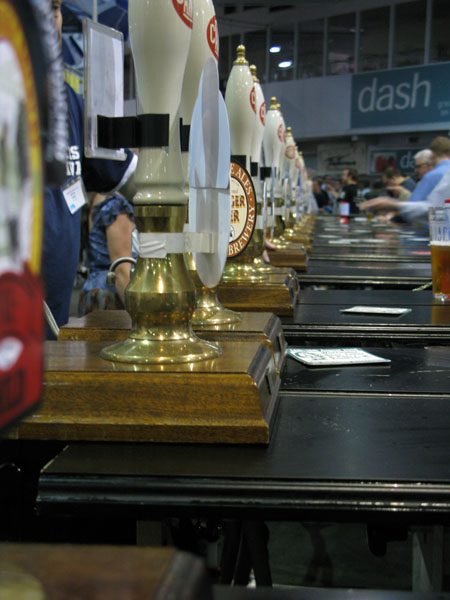 The crowd waxed and waned over the afternoon sometimes being several deep at the bar. Part of the time, this was due to the English inability to step away from the bar after getting their pints. At other times, it would be a ghost town in front of us.

The highlight beer in our section might have been the Ginger Ale from Enville which really did taste like ginger ale. Unfortunately, it will also the hardest beer to pull as it was very lively and foamed easily.

Taking money wasn’t too hard considering I hadn’t been in a job where I took money since I was in my teens. Once I could get a system down in my head, it went smoothly most of the time. I will admit, I messed up on the money once and the older gentleman was nice enough to help me out.

The most difficult situation was when some punter came up with five of his mates and he was buying. All six would get different beers and different sizes and you would have to keep a running total in your head. 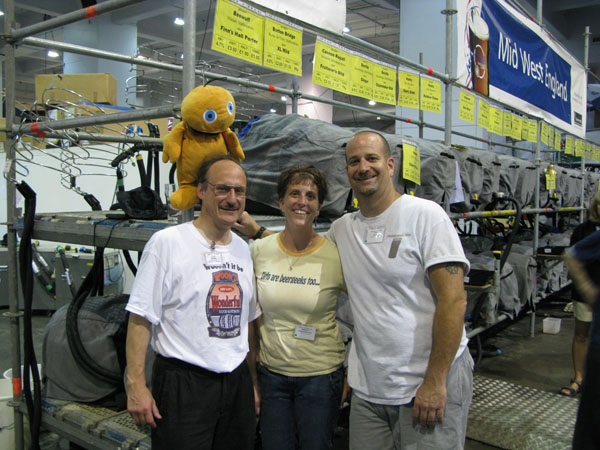 Zippy in his opening talk told us that the main thing was for us to have fun. And it was fun… it was great… when we make it back to GBBF, we will do it again. For all of our hard work, we received not only fond memories, but also a free session and discounted beer.

We finished up the day at our second favorite pub in London the Wenlock Arms meeting Paul and Eilís for quiz night. Run by Eddie the – now not so – Fat Controller, it is a lot of fun and is something that we would recommend. The questions are a lot harder then quiz in the States… well, at least in our neck of the woods.  We came in sixth out of 13 teams.