The Year in Beer has been in San Francisco the last couple of days warming up for the big weekend that starts today with the Toronado Barley Wine Festival. 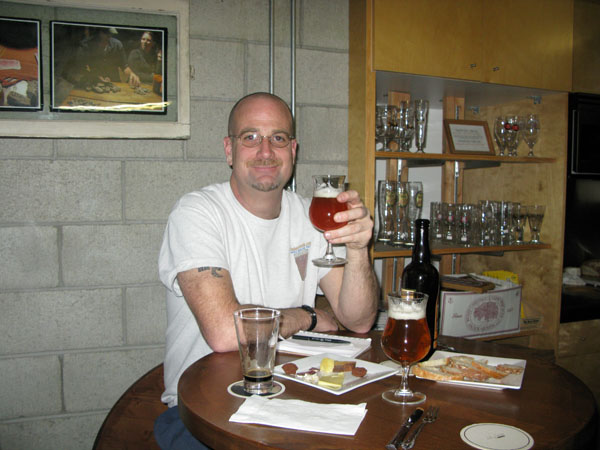 We arrived Thursday evening and after checking into the hotel and leaving the car, we walked straight to City Beer for a nice relaxing Valentine’s Day evening. After the a glass of Ommegang’s Chocolate Indulgence, which neither of us thought was very chocolately, the serious business of beer tasting began; Lost Abbey Avant Garde, Avery Out of Bounds Stout, and Russian River’s Redemption & Damnation. I was trying to start the weekend slow but as always when I am at City Beer, I am a kid in a candy store.

However, the highlight of the Valentine’s evening had to be the Thai restaurant/Karaoke bar that we ended up at. It always ends up that at 11 o’clock at night after a few beers, I get hungry for Thai food. Usually, I am left unfulfilled, but we actually found a Thai restaurant, quite by accident, I might add. Now that’s a good start to the weekend! 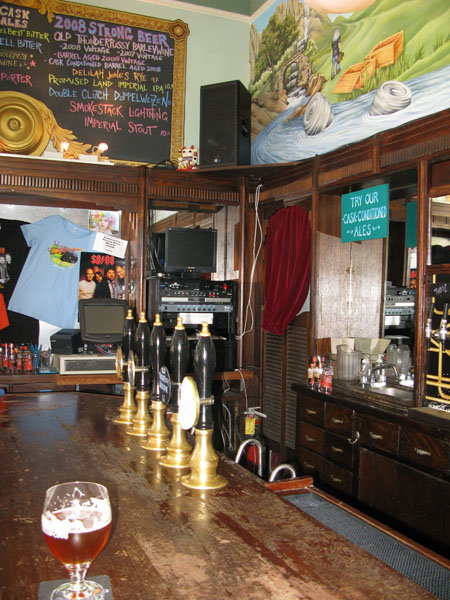 Friday was an absolutely beautiful February day in San Francisco. We spent the day with our friend and beer guru Rowdy…just like old times. We tried to go to a new place called Wunder Beer (the guy’s last name really is “Wunder”), but they were not yet open for the day.

Undeterred, we walked over to the Haight to get some lunch at Magnolia. Though one half of strong beer month, it was going to be a long day so we stuck to their regular line up of beers. Magnolia always has three or four of their beers on cask so I always enjoy going there. The Bitter, Best Bitter and Porter was a nice way to start the day.

21st Amendment is the other half of Strong Beer Month, so we went there next. While there, we hooked up with our friend Chris, the Beer Retard. And lastly, we returned to City Beer for the final liquid appetizer before heading to the Beer-Chef’s chocolate and beer tasting. 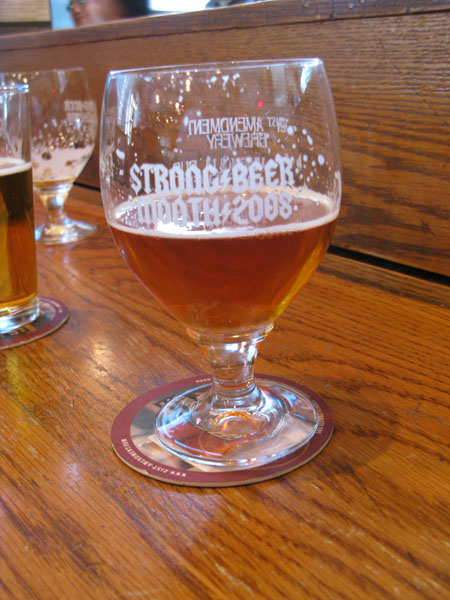 The highlight of the day had to be Hop Crisis, an 11.8% hop bomb from 21st Amendment. Hop Crisis is one of those dangerous beers; it went down way too easily for a such a strong beer.

We smoozed with the best of them at the dinner, seeing several people that we met in Alaska, plus old friends and others. The food was out of this world…the beers not so much. We ended our night hanging out at Tommy’s Joynt with Alaska people and decided to call it a night.

So if all that was the warm up, we are in for quite a main course. Today is Toronado’s Barley Wine Festival pretty much all day and then who knows what else. Tomorrow it’s over to the East Bay for the Celebrator’s 20th anniversary party. It’s gonna be a long few days until Monday when we return home.