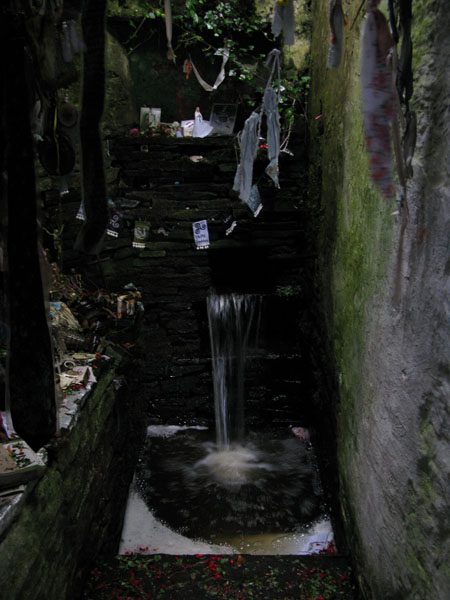 Since we are in Ireland right now, I have been thinking more than ever about St. Brigid. Something I haven’t talked about much is my connection with one of the most beloved saints in Ireland. Known as ‘the Mary of the Gael’, St. Brigid is known for a great many things, including her generosity, her compassion toward the poor, and her ability to turn bathwater to beer.

When I was in the 10th grade, I went through the necessary hoops to become a confirmed Catholic. The saint name I chose was Brigid. I even added it to my name at my high school graduation. I don’t remember why exactly I took that name, but I do remember looking through a book to peruse my choices. Little did I know at the time, the depth to which fate would have led me to choose St. Brigid.

The first connection is the love affair I would eventually develop with Ireland. When I was younger, I had no concept of travel. No one in my family ever traveled abroad and it was difficult for me to think much beyond California, even. But, as you know, Ireland is one of our favorite countries to visit. As a sea faring girl (my name means protector of the sea and I grew up on the beaches of Carmel), the west coast of Ireland calls to me. In the rugged beauty and harsh existence, I find comfort and coziness. To me, the rough Atlantic Sea sounds of music as it hits the rocky shores.

Next, Brigid is known to have been generous and compassionate toward the poor and disenfranchised of her day. A social worker of sorts. This included providing staples to the poor and care to the sick. One of the primary myths (or miracles, depending on how you view it) associated  with St. Brigid is how Ireland became the Emerald Isle. The story goes that Brigid approached a miserly king to request aid to the poor. He sarcastically responded to her that he would provide as much as her green mantle (cloak) could cover. Thinking that the cloak would barely cover the few feet in front of her, St. Brigid threw her mantle out and it miraculously spread throughout the entire countryside, cloaking the land in green. This, of course, came as a great shock to the king. As a social worker, I find these stories of her generosity and compassion very inspiring.

Most recently, I have become aware of St. Brigid’s miracle of beer. She worked in a leper colony and when the people of the colony implored her for beer to drink, she found there to be none. By the sheer power of her blessing, she turned water meant for bathing into beer for all to drink. She was also said to have turned her own dirty bathwater into beer for clerics visiting her monastery to drink. Another story endearing her to beer drinkers is that she was reported to supply 18 churches from just one barrel of beer.

A poem attributed to St. Brigid and often quoted by beer lovers, states ‘I would like a great lake of beer for the king of kings; I would like the people of heaven to be drinking it through time eternal.’

What more could a beer loving social worker aspire to be than a woman who wishes upon all the people of the world, rich and poor, sick and well, a steady supply of beer.