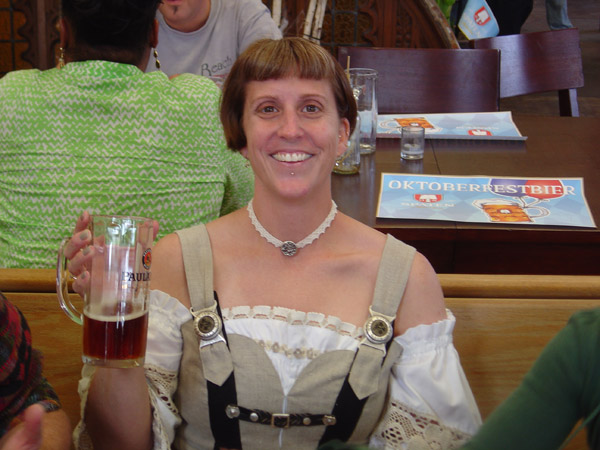 Well, last night officially marked the end of our Oktoberfest season. And, the end of wearing my dirndle until next year. Last weekend we had a great time at the Tyrolean Inn’s Oktoberfest celebration, drinking litres of beer and having fun conversation with our friends. I also got an opportunity to talk with Chuck and Whitney, the owners of the Tyrolean. They are a fun and interesting couple that represent the best of Santa Cruz mountain folk. The only bummer of the evening was that it was a bit chilly out and try as I might, I eventually had to change out of my dress and into something warmer. I kept thinking that I just needed to drink more beer and then it wouldn’t matter, but two and a half litres later, I was still cold! 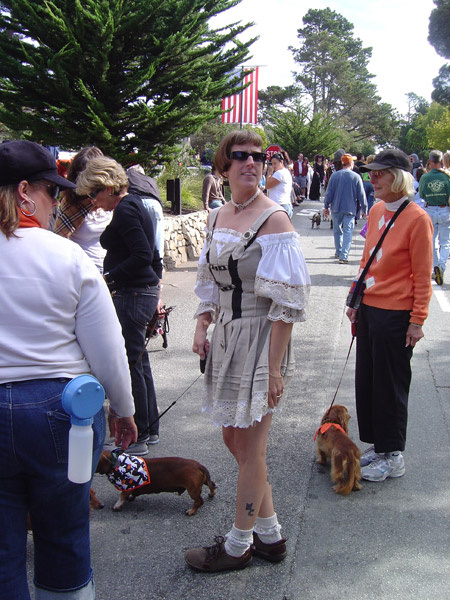 Yesterday, however, I managed to wear my dress all day long. First, we participated in the Carmel birthday/Halloween parade with the Carmel Dachshund Club. It’s always a fun group and seeing all the wieners scurrying around is a real hoot! Luckily, only one poor wiener was dressed as a hot dog.

While I would never dress them as hot dogs, I do admit an inclination to humiliate Porter and Stout with outfits. However, I can only manage to get a Halloween bandanna around their necks and they barely tolerate that!

After the parade, we headed straight over to the Ol’ Factory Cafe for their Oktoberfest celebration. Again, good conversation and beer drinking marked the afternoon. Chris brought his CD of oompah music, so that really got the mood going! And, the best part was that it was indoors, so I managed to stay in my outfit all afternoon! But alas, the party had to end and so my dress gets put away for another year. Maybe I’ll bring it out again in May when the Tyrolean has their Maifest. And, I think I will seriously consider wearing it to the Oktoberfest in Munich next year. Because, let’s face it, it’s a festive outfit and I look pretty cute!