Sorry for the boring title… I tried to think of a clever title for this post… a play on “Chico and the Man”… but my normally clever mind failed me miserably this time.

We traveled this past weekend to Chico to see our favorite band Flogging Molly; a trip to Chico that also included a visit to one of my favorite breweries; Sierra Nevada. 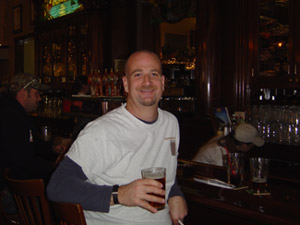 It’s been a few years since we have been to Sierra… almost ten to be exact. And to make somewhat an understatement, things have changed a bit. While the huge, crowded restaurant lacks charm and warmth, we enjoyed conversation with locals who love their hometown brewery. And a visit to the brewery has its advantages; you get to drink beers that are only served there.

Our choices beyond the regular Sierra Nevada lineup included, among others, a Kölsch, a ‘brewery only’ version of the world famous Pale Ale and 20th Street Fresh Hop Ale, a beer made with hops grown on the brewery property.

However, the highlight beer was brewery fresh Celebration Ale; something that I have never before enjoyed. Words cannot describe the pleasure I had drinking this beer. It has much more hop character than the Celebration I am used to… I am not sure I will be able to go back to regular Celebration.

The only disappointment was that I wasn’t able to try any cask Sierra. Cask day is Thursday for those planning a visit.

For some reason, because Sierra has grown into a large craft brewery, there has been a backlash. But they grew in the right way… while some of their brethren from the early 80s disappeared and others have changed for not the better, Sierra Nevada continues to make some of the best beer in the world.They might not make the hop or alcohol bombs that are all the rage right now, but they make damn good beer. Oh… and they are eco-friendly too. (I’ll get down from my soapbox now.) 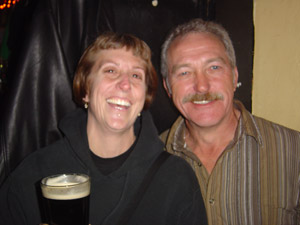 After the show (Flogging Molly was great as usual), we ended up at a pub called Duffy’s to meet up with a few Flogging Molly band members. Suddenly, I heard a familiar voice; our old friend English Paul. Merideth and Paul worked at Barclays together back in the day and just he happened to be in Chico the same weekend… in the same pub.

I guess the odd part of this story is that Paul lives only 15 miles from us and we never see him. When I had time to play golf (yes – you read it correctly – golf) I used to see him at the course, but that was it. You would think we would run into Paul at a pub but he frequents the Bulldog in New Monterey… a nice pub… just one that we rarely visit. So, it took a five hour drive to share a pint with Paul again.

The postscript to this weekend was that Merideth was hopefully going to get #350 on the trip but Butte Creek Brewing does not have tours/tastings on the weekend. Their loss I guess. To add to Merideth’s disappointment, on the way home, we had lunch at Kelley Brothers in Manteca; a brewery that Merideth already had but I didn’t. So now I am two ahead of her; 351 to 349.

There is a silver lining to her despair… Merideth will get #350 in London and it will be included in our London episode. It will be either Fullers or a place called the Horseshoe.