Our latest and greatest episode of “One Pint at a Time” was posted a few hours ago. Called Beer Beyond Denver, the episode chronicles our beer adventures when we went out to Colorado for the Cal v. Colorado St. football game back in September.

Episode highlights include an interview with Chris Katechis, ‘Commander in Craft Beer’ of Oskar Blues Brewery in Lyons, CO, Merideth doing her best impersonation of Elaine Benes and my reaching 350 breweries.

For all the episodes of “One Pint at a Time” go to beergeekTV.

For those expecting a Pacific Northwest episode, I struggled with writing Merideth’s voice over for the past few weeks and finally decided that I needed to move on. In the end, that was a good decision because I was able to put this episode together in a day… it practically edited itself. Hopefully, I will get the Pacific Northwest episode posted before we leave for Europe on December 12th. Maybe a few beers will inspire me…

Speaking of beer… last time we were at City Beer in SF, I bought a bottle of St. Bernardus Christmas Ale, a 10.5% Belgian. On Thanksgiving Eve, I brought it down to Ol’ Factory Cafe to share with some friends and the consensus amongst us all was that the beer was amazing. If you can find this beer, I highly recommend that you buy it straight away. And good luck because it apparently was a limited release here in the States. 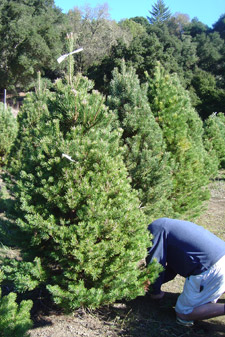 In more beer news, we’ll be up in Boulder Creek on Sunday for our annual Christmas Tree Hunt which means you will be able to find us at Boulder Creek Brewery around opening time (11:30am) enjoying a few pints and having some lunch.

Our Christmas Tree Hunt is a week earlier than usual (in fact, it has never been in November) because the following weekend we will be in Chico to see Flogging Molly.

Moreover, if I can get a hold of the people at Butte Creek Brewery and schedule a visit, Merideth will get her 350th brewery. We will also be going to Sierra Nevada… which is very exciting because we haven’t been there in almost 10 years.

Finally, and somewhat a pre-announcement, Merideth is going to have a beer article in the January issue of Carmel Valley Magazine. When the issue comes out January 1st, we will be sure to remind everyone.

Slainte… and if you are in Boulder Creek or Chico the same time we are, let us know.