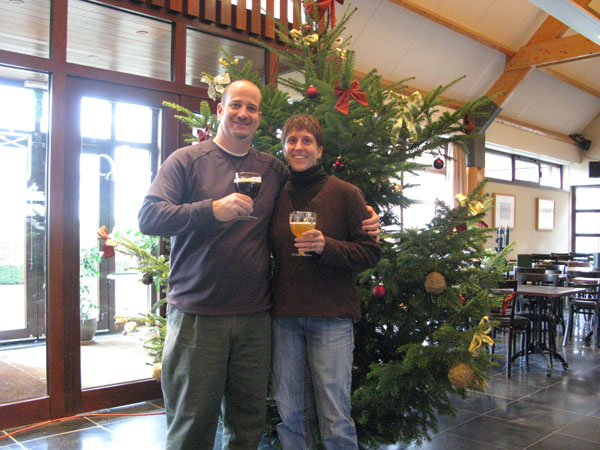 Yesterday was probably one of the biggest days in all our beer travels. Not only we were visiting the brewery with the most elusive beer in the world, Westvleteren, we were also visiting a nearby brewery that makes one of the most unique beers in the world, Rodenbach. In planning the trip, this was the day I was most excited about.

Unfortunately, health didn’t completely cooperate. The first few Flogging Molly days of the trip, we mingled with a bunch of people who had been sick over the previous weeks. I had been sniffly over the past few days, but yesterday was the first day I felt like crap. And it had nothing to do with all the beers I drank the previous night at ‘t Brugs Beertje.

After conveniently ignoring the wakeup alarm, we finally got on the road an hour late.  Our first stop was the Sint Sixtus Abbey, home to the most sought after beer in the world, Westvleteren. It was a longer drive from Bruges than I imagined, with the last few kilometers down these one-lane country roads being the most frustrating. One the one hand, I felt like shit. But I also had the adrenaline pumping in anticipation of trying supposedly the world’s best beer. 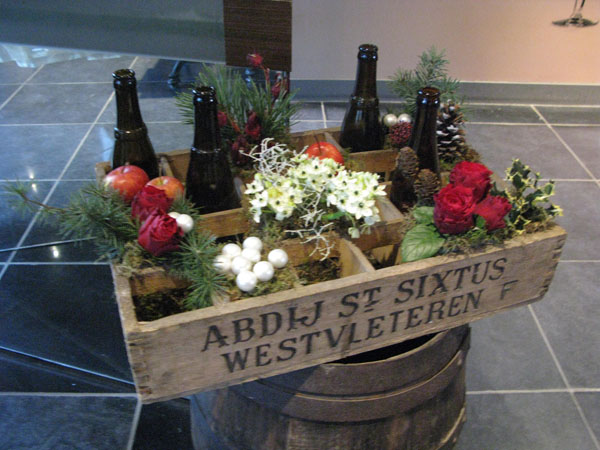 Finally we parked and I rushed up to their cafe/restaurant, In de Vrede, to make sure they were open. All good. We quickly found a table and instead of waiting for the waitress, I rushed over the counter to order two beers.

Before the beers arrived, we decided that we should buy beer to take home to California now. The beers they sell are very limited and can quickly run out. You can still stand in a long line to buy beer from the little window over at the Abbey, but now there is also a more civilized way to buy your beer. There is a little store in In de Vrede. I think the only advantage of buying across the street at the Abbey is that you get the cool wooden tray instead of a paper six-pack holder. 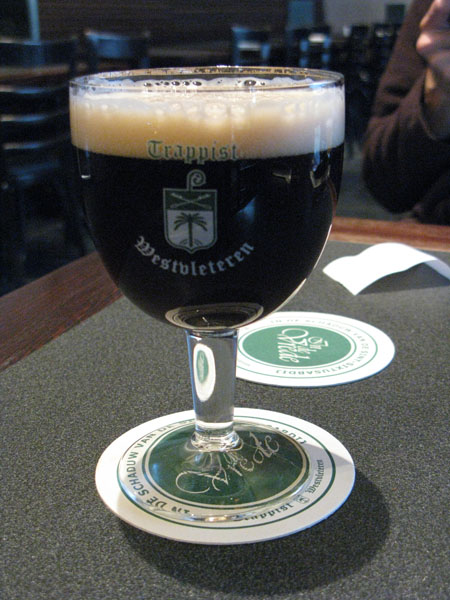 Are they the best in the world? I would say ‘Yes’ at the moment I tasted them, but that statement is probably tied into the whole journey to get to the point of me actually trying them. I had the same feeling the other day when I drank Orval at their Abbey. In the end, it is the experience that is at the heart of beer travel. 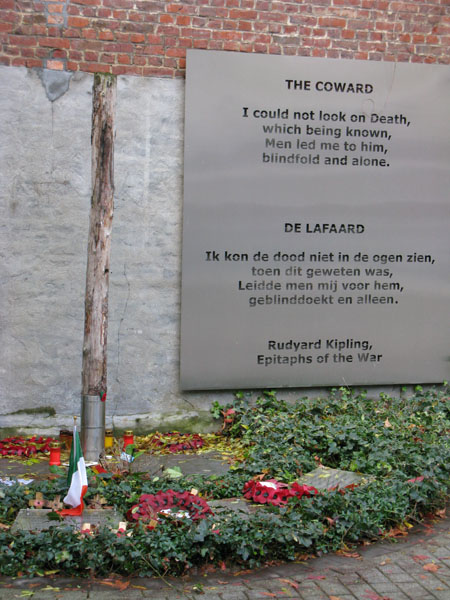 Moving on, we visited the town of Poperinge, the center of hop production in Belgium. Unfortunately, the national hop museum was closed for the season, so we just walked around town for a bit and smiled at town’s numerous hop adornments. We did buy some hop-shaped chocolates.  We also double-checked to see if the recommended beer bars were really closed on Wednesdays. They were.

We finished up our Poperinge with a sobering visit to the city hall. World War I raged in this area, the battlefields of Ypres(Ieper) are just a few kilometers down the road. The nearby countryside is dotted with Commonwealth war graves, the final resting place for soldiers from Canada, New Zealand, Ireland, Australia and the UK.

In the less enlightened times of the years 1914-18, shell shock victims were shot for being cowards. And in the courtyard of the Poperinge city hall, there is the memorial to British soldiers executed here for desertion. Not sure if the post is original but you can also visit the cells where they spent their final hours. 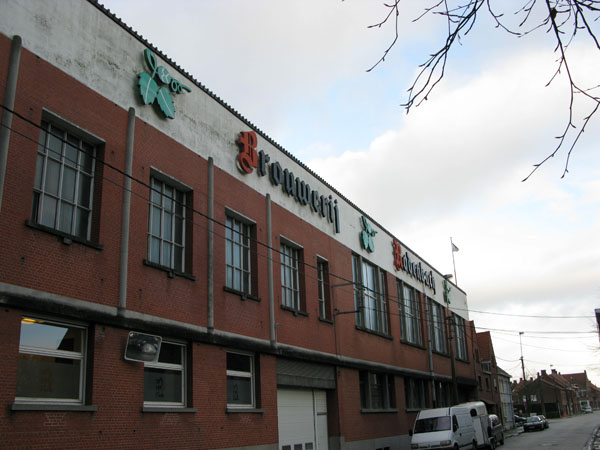 Then it was off to Roeselare and the Rodenbach brewery tour. I have been going through a serious ‘sour’ phase for the past year and Rodenbach’s Grand Cru is a chief reason for it. I was determined to visit Rodenbach while we here.

We are not normally into organized brewery tours, but that was the only way we could see the oak barrels, the secret behind the unique Rodenbach beer. I contacted the brewery several weeks ago and luckily there was a English language tour happening yesterday. Luckily, I say because English tours are rare at Rodenbach and we have done brewery tours in a language we can’t understand before and they are kind of boring. 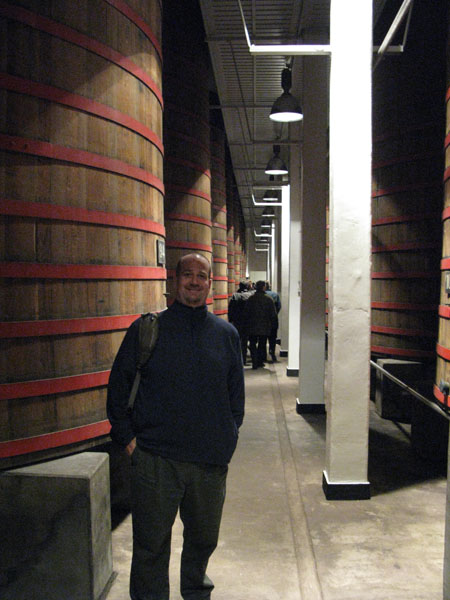 Our group primarily consisted of people from NATO. There were about 20 of them and the 2 of us. After watching a short video on the family history while sipping regular Rodenbach, we set off on the tour of the brewery. We were shown the brewhouse, from the outside, and the old malting facility from the time when Rodenbach did their own malting.

But the real star of the show are the oak barrels. There are 294 of these massive vessels some as much as 150 years old. Walking through room after room of the Grand Cru in the making, I only wished that I had one of the keys that worked the sampling spigot.

Rodenbach employs two coopers to keep them in working order and maintenance includes being ‘scraped’ every 12 years.

It is in these barrels that Grand Cru gets its magic. After two years of aging, the beer from different barrels is blended to create the final product.

We finished off our day by tasting Grand Cru. And what a day is was… visiting two gems of the brewing world… the rarest and maybe the most unique. 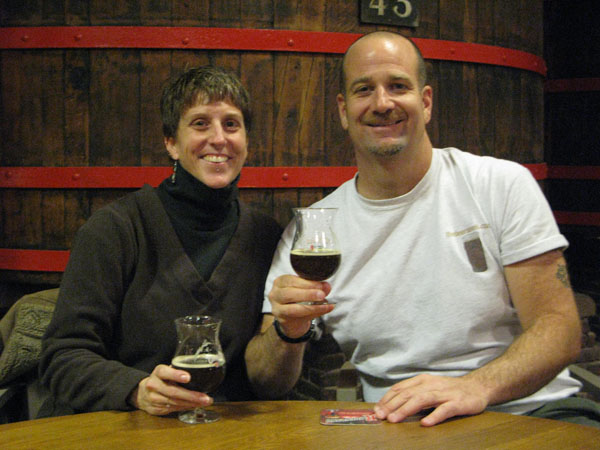