It is always a good feeling to be more than a festival goer at something like Oregon Brewers Festival and Friday was the day that we became contributors to the effort. 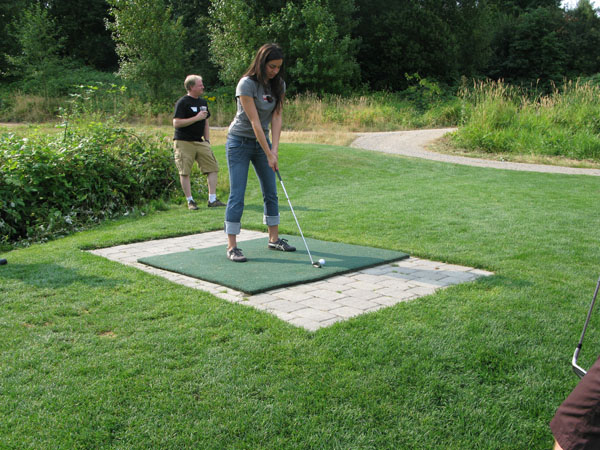 We started the day bright and early out at the golf course at McMenamin’s Edgefield for the 4th Annual Sasquatch Brew Am. The tournament pairs brewers, beer celebrities and beer fans in a suds filled romp around Edgefield’s par 3 course.

The event is a fundraiser for the Glen Hay Falconer Foundation. Glen Hay Falconer was the brewer at Wild Duck in Eugene who died in 2002. The foundation was set up to provide “opportunities for professional and aspiring brewers to further their knowledge and expertise.”

This was our first time out to the BrewAm and we went as observers, but those who participated definitely looked like they were having a good time. If you make it to Oregon Brewers Festival in the future, you need to add this event to your schedule. Knowing how to play golf is not required. 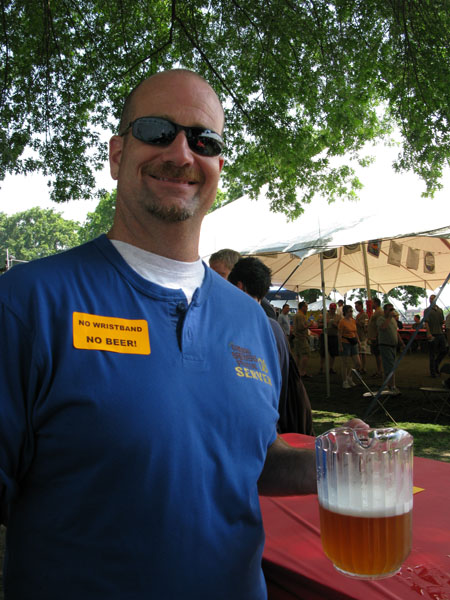 Unfortunately, we had to leave the BrewAm early because we were volunteering at the festival. We were very excited because we got to be more than ‘bread cutters’. This time we actually poured beer.

The key to the success of any beer festival is the army of volunteers who do everything from take your money to pour your beer. And OBF is no different.

We arrived early enough at the volunteer tent to be able to choose the beer we wanted to pour. We learned from Mark Angelus and his wife Jennifer that you wanted to pick a beer that was in the shade; an important tip for what was going to be a warm day.

And the beer we chose was 21st Amendment’s Hell or High Watermelon Wheat because it was in the shade and Shaun O’Sullivan thought it would be cool if we poured his beer.

The one thing we forgot was that Watermelon Wheat is one of the most popular beers at OBF, so we worked our asses off for four and a half hours. However, being so busy did make the time go faster.

I would encourage everyone to consider volunteering at a beer festival… it is fun and rewarding.