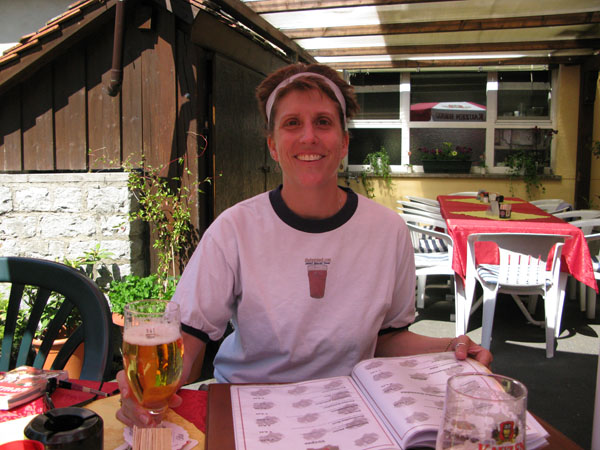 It is good to be back in Germany. This is our seventh visit to Germany and we have never been disappointed in our travels through this country. While we have only added two new breweries to our list so far, it hasn’t been for a lack of trying.

We arrived Friday late morning after two uneventful flights. Our plan was to go to a brewery in Ochsenfurt, have some lunch and then head on to our final destination of the day. We found the brewery just fine but they didn’t have any attached restaurant like I thought they did. Undaunted, we walked into town and had lunch at a small restaurant and did get to enjoy the brewery’s beers. Unfortunately, the brewery doesn’t make the list.

We spent the first night in a small town called Neuhaus at Hotel Zum Löwenbräu which is a brewery hotel. The brewery hotel is one of mankind’s greatest inventions and we have found the ones in Germany to be the nicest and least expensive places to stay. Plus, you’re guaranteed good German food and beer just a few paces from your room.

While we were enjoying dinner at the hotel on Friday night, we were wondering where all the people were. Neuhaus was a small town and the place we were staying was the only restaurant in town. On our walk the next morning, we discovered the Löwenbräu Felsenkeller, their beer garden in the the forest. It looked really cool and we figured that was where everyone was the previous evening. So, if you are ever in Neuhaus, check out the Felsenkeller. 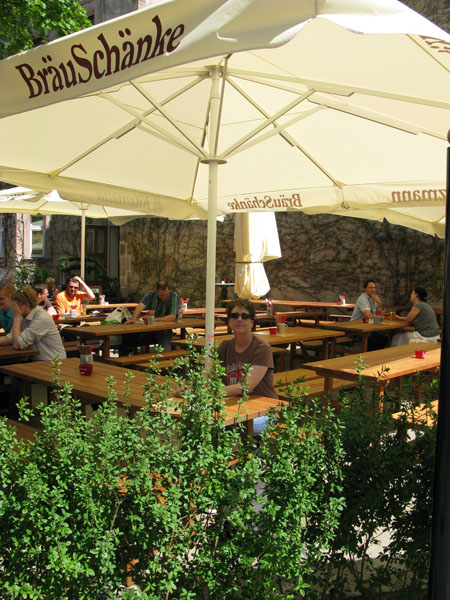 After our walk on Saturday morning, we decided to head into Bamberg to get two of the breweries that we had missed last year. Admittedly, I could have done a bit more research, but I assumed that if we get there at noon, everything would be fine. Wrong. One didn’t open until 2pm and the other 5pm. And what we thought was funny was that on Sunday, both opened at 11am.

Denied beers in Bamberg, we headed down to Erlangen to get settled before the Bergkirchweih on Saturday night. Up the street from our hotel is the Kitzmann brewery and unlike every other place we had been to that day, it opens at 10am. So at 3pm, we enjoyed the first beers of the day and the requisite German food consisting mainly of pork.

Then it was on to the Bergkirchweih Beer Festival. The woman at the hotel desk gave us a good luck warning when we told her we were in Erlangen for the festival. Last year, we went on the last weekend. Yesterday it was the first weekend. And as you can probably guess, it was a different experience. On the last weekend, the Berg is pretty mellow; the locals are probably beer-ed out, granted a concept hard to attach to Germans. 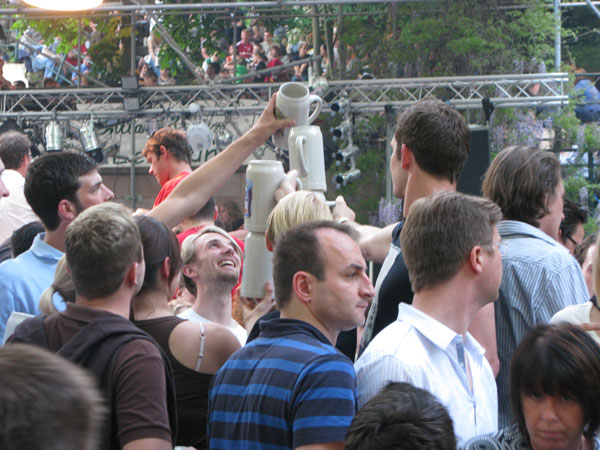 However, the locals were going all out yesterday. And it helped that the weather was perfect; between 75 and 80 degrees.

We arrived around 5pm and easily found a table and got our first liter; we were sharing at first since it was going to be a long evening.

After talking with a German family from Bayreuth who had joined us at our table, we walked around and reminisced about the places we were just 11 months ago. We sat here… that’s the tent where the mean waitress gave us the over-salted radish… there is the oxen roasting place… It’s odd to be nostalgic about such recent events but it was on our trip last June that we embarked on our beergeek.TV adventure. So, it was interesting to be back, remembering how green we were less than a year ago. 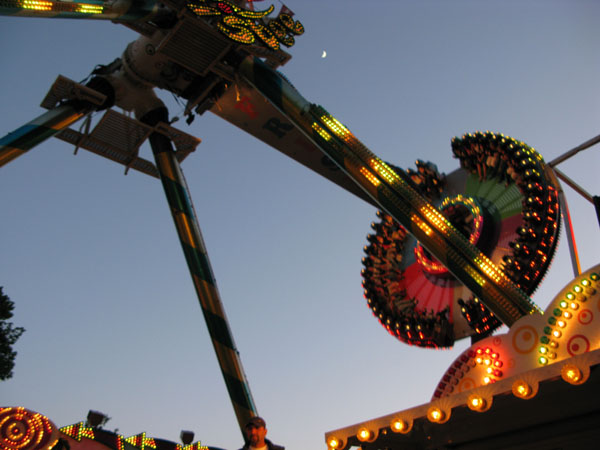 While the festival was manageable during daylight, once it got dark, the throngs arrived and the Berg became this one big mass of drunken people.

Merideth did engage in that German tradition of drinking liters of beer and going on fast, whirling carnival rides. Someone did puke on Merideth’s ride, but it wasn’t her.

Tomorrow is Mother’s Day, so I assume the Berg is going to be mellow… at least until the sun sets.