It’s been a while since we posted a ‘On the Homefront’ blog. Mainly it’s because we haven’t had much time to do anything on the homefront. But we’ve been home for four weeks now and we have another week before we leave for Germany and Oktoberfest.

I have to say, the break couldn’t have come at a better time. Our batteries were a little low and we were missing the pups more and more on our trips.

So what have we been doing for these past 4 weeks since our return from England?

Well, shortly after our return from London, we had our English beer tasting. It’s always fun to offer people beer styles they don’t normally drink and introduce them to breweries they have never heard of. Real Ale, of the bottle conditioned variety, was a hit and our friends enjoyed everything from the Stowey Brewery’s In House Real Ale to Hook Norton’s Double Stout. 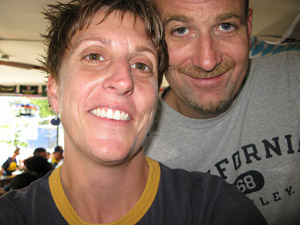 August also saw our return to Keg Lube, the local home brew club’s tasting event. We aren’t members of the club, since we don’t home brew, but we’ve appointed ourselves “official tasters” and no one seems to mind. This club has some great home brewers and we tried some tasty beers. The highlights for me included a chocolate porter and a chocolate cinnamon stout. One of the members, Dave, brews an excellent pale ale that we are always happy to drink. Plus, he brought more of his chili rauchbier (it’s very good). Needless to say, we had a great time. Thanks to Steve and Tina for hosting again this year.

Last weekend we had our first Cal football game of the year and so started our frequent Fall visits to the Bay Area. Our good friend Chris Devlin was down from Seattle and of course we joined him for a pint or two. 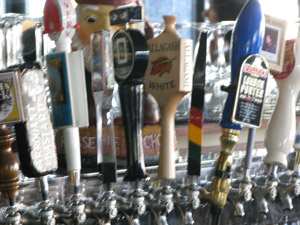 Together with Chris, we made our first trip to Monk’s Kettle in the City’s Mission District. Last year, three beer bars opened in the Bay Area at around the same time: Monk’s Kettle and La Trappe in the City and the Trappist in Oakland. Monk’s Kettle was the only one we had not yet visited. The atmosphere was cozy, so I’m not sure I would want to be there on a busy night. But, they served an excellent beer selection and we all enjoyed a Reality Czech Pils from Moonlight (among other beers).

After Monk’s Kettle, our pregame ritual brought us to Barclay’s for a few pints. After the game (Cal 38 Michigan St. 31), we even managed to meet up with Chris again at La Trappe. 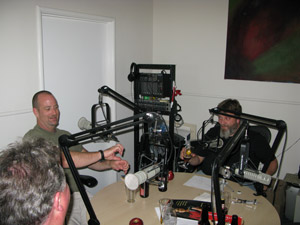 We finished up our Bay Area weekend by recording for Beer School. We have known Motor for over 20 years and we frequently see him at beer events, Cal football games and miscellaneous other places. He was nice enough to invite us to do a show with them. After a lengthy production meeting at 21st Amendment we headed over to the studio to talk about beer, travel, us, and everything else under the sun.

Finally, we did 4 radio interviews last month. Since all our interviews have been morning shows east of here, we had several very early mornings. The radio stations were in Milwaukee, Greensboro, Phoenix and Detroit. You can listen to our latest from the Ben and Matt show in Phoenix, AZ and we have two more radio interviews on our press page.

In between all this, we have been visiting (and re-visiting) various local pubs that serve beer on draught. As research for an article I’m writing for a local weekly, we are on a mission to discover the 5 top draught beers served in Monterey County. Being in the beer backwater, it actually may be more arduous than one might think. We’ll be sure to let you know what we find.