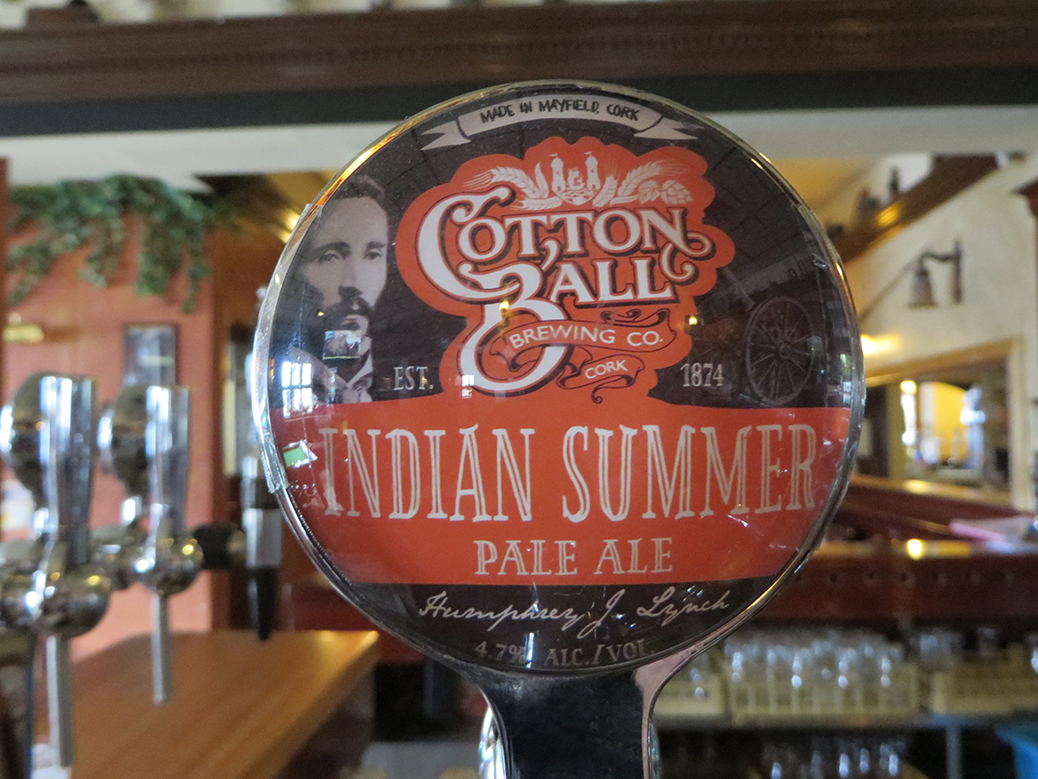 Once it was settled that we would spend a few days in Ireland prior to heading over to Germany, my task was to map out our brewery visits. With no plans to rent a car, our options were limited to the Dublin area or places we could reach via train or bus network. After a bit of research, spending a day in Cork seemed like the best option to add a few breweries.

Despite the first day over-indulgence in Dublin, Merideth and I managed to make our morning train to Cork. We welcomed the two-and-a-half hour journey for a bit more sleep. Arriving at Kent Station in Cork, the fresh air of the almost one mile walk to our first stop, Rising Sons, also helped in clearing the cobwebs from our heads.

Rising Sons was unlike any other brewpub we have been to in Ireland. For lack of a better word, it was very American. The large brick exterior was reminiscent of a warehouse but the building had, in fact, housed a printer who at one time printed all the check books in the country. The high ceiling, exposed beamed open interior was dominated on one side by the copper clad brewery behind a large window that backed the bar.

Waiting for us at the bar was our friend and guide for the day, Dave O’Leary. Owner of Bierhaus Cork, we first met Dave back in 2008 during our Year in Beer visit to Ireland. One of the pioneers of the Cork beer scene, who better to hang out with in Ireland’s second city?

Still feeling the effects of the previous night, I ordered, somewhat out of character for me, a half of Sunbeam. The half being the out of character part, I caught Merideth giving me a ‘I’m married to this guy’ look when I said half. The 4.3% ABV Bavarian-style lager was a perfect hair of the dog beer. Merideth started with Grainú Ale, Rising Sons’ 4.6% ABV Belgian-style Summer Ale. She was a trooper though and ordered a whole pint.

Six years since we last visited Cork, five years since seeing Dave last, we caught up with him and the Cork beer scene as we nursed our beers. Starting to feel alive again, I followed up Sunbeam with Handsum, Rising Sons’ American hopped IPA. However, I still stuck with a half pint.

Already back in our minds that we had an evening train to catch back to Dublin, we finished our beers and decided it was best to move on.

If there is a commonality in the people we meet on our travels, it’s that many end up helping us with our quest. Whether it is research, transportation or guide, people are eager to participate in our beer adventures. Dave was no different.

He mentioned there was a newish brewery in Mayfield, an outlying area of Cork, that had an American connection. Too far to walk and too long a journey on public transportation given our short window, Dave volunteered to drive us to the amusingly named Cotton Ball. And we can’t thank Dave enough for this. Not only did we add a brewery that we might not have, Cotton Ball ended up being one of those very special brewery visits — it joined my love of beer and interest in Civil War history.

Up past Heineken Ireland we drove into a working class part of Cork. The sign advertising Stouts and Ales gave the Cotton Ball a look of your typical Irish pub from the outside. Entering the small front bar, I was somewhat surprised to be the only customers. Our trio settled up to the bar.

Both Merideth and I started with the 4.7% ABV Indian Summer Pale Ale. A wonderful citrus hop aroma greeted me as I took a big gulp of my first pint of the day. After a few more gulps, it was time to go check out the brewery. Pints in hand, we passed through the large dining room (that’s where all the people were!), down some stairs and into the large space located below. Here we were greeted by Eoin Lynch. Brewing started in late 2013, Eoin Lynch explained as we toured the five barrel brewhouse.

While touring the brewery, Dave brought up the American connection. Eoin suggested we go back upstairs and talk to his father, he would be able to fill us in. Eoin introduced us to his father, Jack Lynch. And the Cotton Ball story unfolded.

Jack’s grandfather, Eoin’s great-grandfather, Humphrey Lynch emigrated to America at age 15, settling north of Boston. At the outbreak of the Civil War, Humphrey enlisted, joining the 4th U.S. Light Artillery. Fighting mainly in the western theater including battles such as Chickamauga, Humphrey was discharged from the Union Army in 1865 at the rank of sergeant.

Returning to Ireland in the 1870s, Humphrey bought a public house in what was then called Baile na Mbocht. He named his pub the Cotton Ball, harkening back to his years following the Civil War working as a foreman in a cotton mill. Almost 140 years later, still owned by the same family, the Cotton Ball added the brewery.

Back at the bar after the history lesson, we all grabbed a bite to eat while enjoying the Cotton Ball’s wonderful Lynch’s Handcrafted Stout, both on nitro and off the shelf.

Returning to the city center, we had time for a quick pint at the Bierhaus (Dave’s beer bar) before heading to our last stop of the day. And Merideth bought her new favorite zippie.

Space was a premium at the tiny Elbow Lane Brew and Smoke House. Entering the tiny 25 seat restaurant, I wondered if we had ever been in a smaller brewpub. I think not. Greeted by the manager, Jerry O’Sullivan, he immediately started us on a tour of Elbow Lane.

Pushing some tables and chairs away to access a door at the back of the restaurant, we entered the tiny brewhouse. I immediately recognized how the place could be so small, a Braumeister system. An all-in-one brewery, all grain brewing system, we had seen one of these before on our last trip to London, but on a much smaller scale. While in that system, the basket could be lifted out by hand, Elbow Lane utilized the biggest kit available, 250 liters. Lifting the basket required a winch. With this Braumeister kit, Elbow Lane produces five house beers.

Touring the conditioning tanks upstairs, Jerry explained that the goal was to achieve just-in-time brewing as much as possible. One of the benefits of such a small brewery to tour, Merideth, Dave and I were quickly seated at the bar ready to try their brews.

Beers ranged from Elbow Lager to Angel Stout. All the beers were solid, especially the 4.4% ABV Stout whose strong roast character I imagined pairing well with some of the bigger meat dishes. The star was Arrow Weiss, a 5% ABV Bavarian-style Wheat that recently won Best in Category for Wheat Beers at the Killarney Beerfest. The prominent banana/clove character reminded me that in a few days we would be in Germany.

The food menu looked pretty amazing but our appetites failed us at this crucial moment. We stuck with a couple of small bites, Olives & Spiced Fried Chickpeas and Pigs in Blankets, as we moved through the sample flight.

It was now early evening and our train’s departure back to Dublin was looming. We thanked Jerry for his hospitality, and after thanking Dave profusely for being our tour guide for the day, we parted ways.

With three breweries added to the List, we walked back to the train station with a bit more bounce in our step then we made the opposite journey from earlier in the day. We can’t thank Dave enough for taking the time to chaperone us around his city.

View all the images from Cork