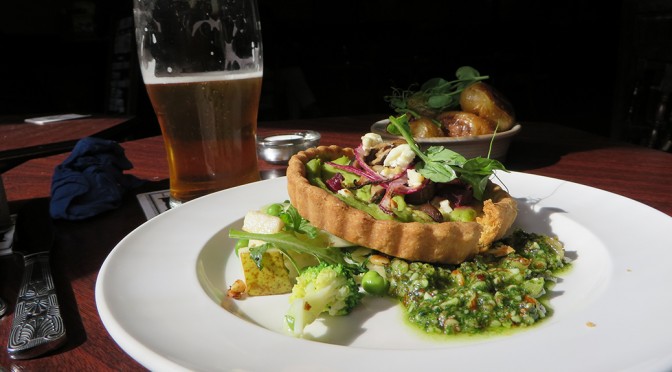 We have been lucky enough to spend some special days in some of our favorite cities. The last time we were in Dublin, Merideth and I spent her birthday traipsing around the ice-covered city drinking craft beer, ending with an awesome dinner with friends. This trip, we spent a romantic 26th anniversary traipsing around Dublin drinking craft beer without the ice, ending at the same spot to have another awesome dinner.

As we departed our hotel late morning, I realized the one advantage that frigid and icy December day in 2010 had over present day Dublin was oddly the weather. While cold, I mean really cold, that day was clear. Forecast for our anniversary beer hike was showers. Nothing can put a damper on beer travel enthusiasm more rain.

On the map, the journey to our first stop, the 5 Lamps Brewery, looked pretty straight forward, a few lefts, than a couple of rights. But a premature left had us wandering the confusing grounds of St James Hospital. I stand corrected. The one thing more than rain that can put a frown on Merideth’s face is following me when she thinks I am lost, which on very rare occasions, does happen. Then it started raining. Our on wedding anniversary. Even I was frustrated unleashing a few f-bombs. After circling around to what felt almost back the our hotel, I finally found the correct road and we were on our way.

We were teetering on being soaked when we located the 5 Lamps Brewery at the back of an industrial park. Greeted by brewer Will Harvey, we were soon joined by owner Brian Fagan.

With greetings completed, we got down the important stuff, drinking beer and learning the definition of 5 Lamps. With their first beer in hand, the Dublin Lager, we listened as Brian explained their colorful name. In Dublin banter, if you want, for example, to shut up a person who is being annoying, you ask them “Do you know the 5 lamps?” No matter the answer, the reply is always “go hang your bollocks off them.”

Continuing on through the 5 Lamps beers, we chatted with Brian and Will about the 5 Lamps (the brewery not the slang) and the Dublin and Irish beer scenes. Talking of their beers, the word accessible came up a number of times. In our world of heavily hopped, barrel aged this and that, accessible is not always a word we hear a lot. But all the beers were well crafted, with the Honor Bright Red Ale and Blackpitts Porter being the standouts for me.

Not wanting to take up any more of Brian and Will’s time, we offered our thanks and bade farewell. As we backtracked to continue our anniversary beer trek, thankfully, the rain let up. The day was even making an effort on being pleasant with the sun trying its best to make an appearance.

Up past St. Patrick’s Cathedral we walked, conveniently arriving out front of Bull & Castle just around lunch time. Settling in with a pints of Galway Hooker Irish Pale Ale, Merideth and I grabbed a quick bite to eat to fortify us for the afternoon of walking and beer drinking.

We even managed to have goodbye pints with our friends Paul and Eilís before they headed back to London.

Continuing our journey through the bustling Temple Bar for the last time this trip, I thought back to our first visit to Dublin almost 17 years ago. Home to the city’s first brewpub, the Porterhouse, Temple Bar in those days was the center of our Dublin beer universe. How our beer world expanded over the years!

With no time for a pint at the Palace, we exited Temple Bar destined for one of the Dublin’s new specialty beer bars. Crossing O’Connell Bridge, we headed down past the Custom House. For Merideth and I, these are mostly uncharted parts of Dublin, an area we rarely frequent.

Near Connolly Train Station, the Brew Dock, like Beer Market we visited on the first night, is part of the growing Galway Bay empire. However, where the Beer Market was shiny and new, the Brew Dock, though newish, felt more traditional, even gritty. Though I will admit seeing out front the young drunk lad with the almost empty bottle of wine being kicked off LUAS added to my initial other side of the tracks impressions.

There was nothing other side of the tracks about the beer list. Along with a lineup of Galway Bay beers, the selection was a who’s who of international breweries. Of note to me was London’s Brew By Numbers, which was housed in the brewer’s basement flat when we visited in 2013. Things must be going well for them.

We stuck with Galway Bay beers. Merideth ordered Mare Icognnita, a 4.8% ABV Saison. Of course, I got the Voyager IPA (US). Hopped with Bravo, Citra, Amarillo and Cascade, the ABV was also on the American scale, 7.5% ABV.

With our day rapidly coming to an end, we were one and done at the Brew Dock. Our journey next took us down shopping mad Henry Street past Smithfield and into Stoneybatter.

If I was forced to name my favorite Dublin beer spot, I would probably say L. Mulligan Grocer. Off the tourist path, the combination of great beer selection and eclectic food menu makes it a must stop on all our visits to the Irish capital. I could think of no better place for the Irish portion of the trip swan song.

Arriving at opening time, we settled in for a few beers and a relaxing anniversary dinner. We shared the Ploughman for an appetizer. While Merideth ordered the Pork Belly for her main, I went lighter with the Spring Pea Tart. There would be plenty of time for pork on the German portion of our trip. All was exactly the culinary expertise that we have come to expect from L. Mulligan Grocer. We finished off the evening pairing chocolate cake with Dark Arts Porter from Trouble Brewing.

With an early flight to Germany the next day, we spent our last night in Ireland at an airport hotel. Somewhat an odd way to end a trip to Dublin, especially since we tried to go to bed at 8pm (Not something easy to do when it is light until after 10:30). But we had a full day, six plus miles walked, and plenty of delicious Irish beer and food consumed. All and all, Merideth and I had a great 26th anniversary day.

View all the Dublin images