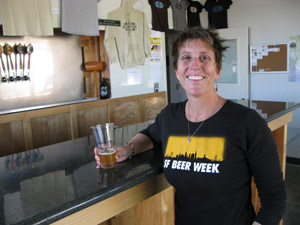 Merideth and I took the afternoon off this past Tuesday to take care of some business on the other side of the Monterey Bay, Santa Cruz. Our business was twofold. There are two new breweries in Santa Cruz to visit and add to the list. Plus we wanted to make a recruiting visit for SF Beer Week.

Santa Cruz holds a special place in our hearts. When we moved back to the Monterey Peninsula in 1994 from the Bay Area, it was somewhat of a culture shock… not to mention a beer shock. After we tired of driving to Berkeley every other weekend to get our ‘fix’, we discovered Santa Cruz, Berkeley lite. It wasn’t quite Berkeley, but it was a heck of a lot closer and the beer scene was good.

So, we are always excited to cross over to the other side of the Bay, especially when we get to add some breweries to the list. 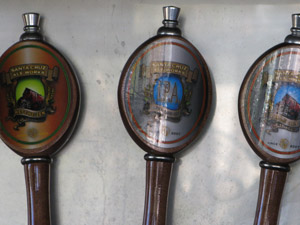 The first new brewery was Santa Cruz Ale Works.  ‘New’ might not be the most accurate thing to say because they did open their doors in 2007. And we had tried their IPA earlier in the year when a friend shared his growler. But this was our first visit to the brewery.

The head brewer, Marc Rosenblum, was formerly the brewer at Santa Cruz’s venerable Seabright Brewery. There were four beers on tap, a Hefeweizen, Pale Ale, IPA and Saison. The Pale Ale and IPA, both nicely hopped just as I like it, were the beers of note. 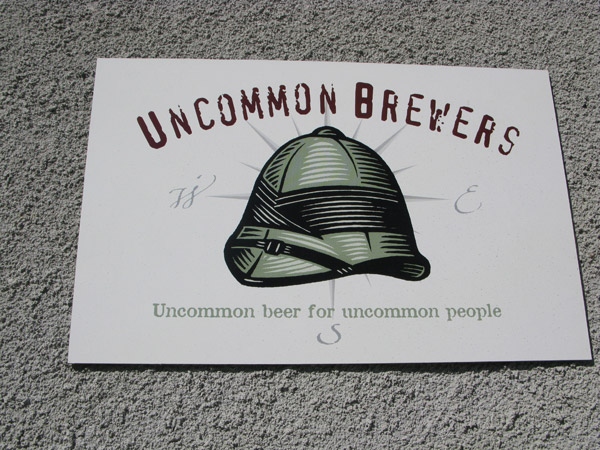 Our second brewery of the day, Uncommon Brewers is located just minutes away on the other side of Highway 1. We first heard about this brewery when we met the brewer/owner, Alec Stefansky, at the Red Restaurant and Lounge in Santa Cruz on Halloween last year.

Uncommon Brewers is part of the new wave of brewers, organic, green, canning and innovative.

We tried both of their beers; the wonderful Golden State Ale flavored with toasted poppy seeds and Siamese Twin Ale, a Belgian-style Dubbel brewed with kaffir lime leaves, lemongrass and coriander. Siamese Twin, at a hefty 8.5%,  is deceptively easy to drink.  In the spring, look for  12.5% version called ‘Sinister Twin’.

Many breweries today are looking for ways to reduce their impact on the environment and Uncommon Brewers is a part of that trend. One of the more interesting green things – and something we had never seen before – were these cool plastic kegs sourced out of the Netherlands. Round and light in weight, they save on transportation costs and when empty are simply crushed and recycled.

If you want to visit the brewery, you need to make an appointment. I suggest visiting their website for the listing of where to find their beer.

All and all, we enjoyed a productive day in Santa Cruz. We added two more breweries to the list and we were also able to generate interest in SF Beer Week.