Our last Year in Beer stop in United States brings us to the hottest beer scene in the craft beer world, San Diego. While craft beer has been around San Diego since the late 1980s with the likes of Karl Strauss, Southern California’s other metropolis burst on the scene in the last decade as a new wave of innovative breweries opened their doors.

And America’s new craft beer mecca is a place where we haven’t spent much time, as evidenced by the fact that I had to look through pre-digital camera beer pictures from the 1990s for this post. And as you probably notice, I couldn’t find any.

We will definitely make up for lost time as we have targeted a dozen breweries from north county to east county and finally, San Diego proper. Our list includes all the cult breweries; Alesmith, Green Flash, Port Brewing/Lost Abbey and Stone. 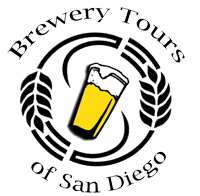 Our big beer day will be on Friday when we hit five; Alesmith, Lightning, Green Flash, Oceanside and Port Brewing/Lost Abbey. And we are excited because we finally get to feature a beer tour company, Brewery Tours of San Diego. Beer tour companies are popping up in all the beer meccas and it’s nice to be able to promote one, especially in a public transportation starved county like San Diego. Brewery Tours of San Diego offers both scheduled and private tours of the San Diego beer scene.

This day is not without controversy. As we have mentioned before, breweries with multiple locations only count once on ‘the list‘. If we have been to one Karl Strauss or Oggi’s, we have been to them all. We have already been to the Pizzaport in Carlsbad, so Port Brewing doesn’t count as a new brewery. But what about Lost Abbey? Is Lost Abbey just Port Brewing’s second label? Or are they a sister brewery? This is something that will definitely have to go before ‘the committee’.

We will finish off our San Diego visit with the San Diego Brewers Guild Festival on Saturday, November 8. “Up to 21 San Diego breweries” will be pouring beers at the World Beat Center at Balboa Park. Since we will have already visited most of them in the preceding days, this will be a good time to try the breweries we missed and retry our favorites from our previous days.

All and all, San Diego looks like a very productive week especially in pursuit of our goal of reaching 450 breweries by the end of the year.