We are recovering just fine from our trip to Colorado though Merideth is still disappointed that she didn’t reach 350 breweries. 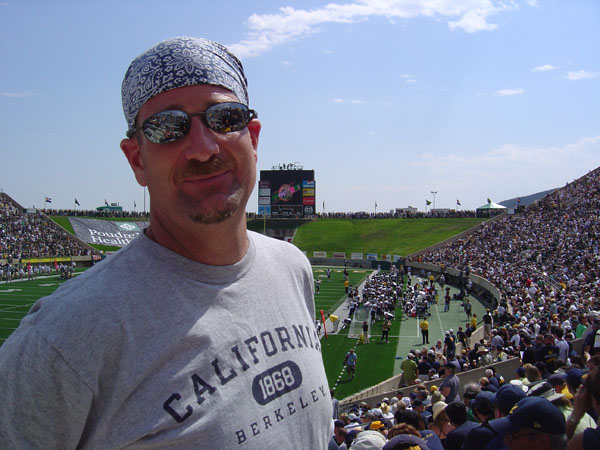 We had a nice day at the game though Cal could have played better. The Colorado St. fans were very nice and we enjoyed talking with a number of them. We were amazed at the variations of washers (a drinking game) that we saw.

Tailgating, which we do not do at Berkeley, was great. In the few days prior to the game, we had accumulated about a case of various Colorado beer (on top of beer we are bringing back for the tasting) and had a nice party with our friends before and after the game.

Tailgating at Hughes Stadium was not without regulations… after having pleasant conversation with about 20 different police officers, the 21st informed us that you had to have wrist bands to be able to drink alcohol. Merideth got a wristband while I remained a rebel. The 30th police officer asked not where my wristband was; rather he wanted to let me know that glass was not allowed but he was just warning me for next time. Apparently there was some sort of riot before or after a CU game where bottles were thrown.

If glass was not allowed, why were the Colorado St. fans drinking crappy beer instead of cans of Oskar Blues?

My final thoughts on the trip… This was the first time in Colorado where we moved beyond Denver/Boulder and we were very impressed. Not only did we drink great beer, but the staff we met were very friendly, helpful and a joy to talk to. Plus, there was a real sense that the breweries were an integral part of their communities. We can’t wait to go back to Colorado to explore more of the beer scene beyond Denver.