We made it safe and sound to Boston yesterday. And because we got in at 6am, we had the whole day to drink beer! We started the day off by going to the childhood town of Chris’ parents; Manchester-by the-Sea, MA. As a testament of how outgoing we have become, we had breakfast at the home of one of their best friends growing up. Woody and his wife, Gretchen, were very nice people and very hospitable. We even got a tour of the town, including where everybody lived as kids. Well, Woody still lives in the home he grew up in, so that one was easy. 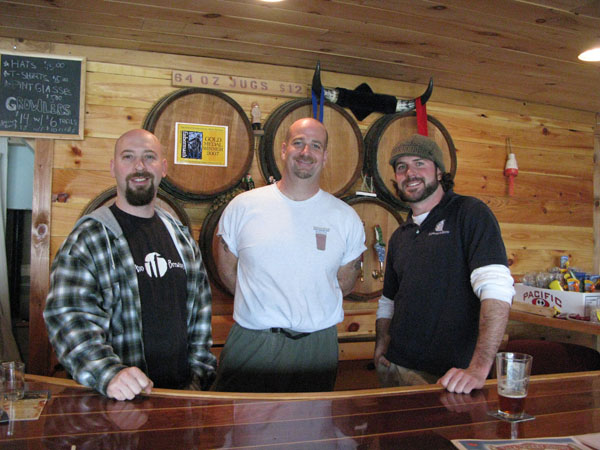 It got to be 10am and Chris was jonesin’ for a beer. So, we headed to Cape Ann Brewing in Gloucester. They were very cool guys. Jeremy (on the left) may look familiar to some of you. He and his friends filmed “American Beer”. If you haven’t seen it, check it out. It documents this cross country beer trip they took. While at the brewery, we also met a nice guy named Nick who lives in Sacramento. He was very curious about how to get into beer journalism and asked us about it. Does that mean we really are beer journalists now?

Next, we drove to Portsmouth, NH and Smuttynose Brewing. There, we met more Californians! Gosh, I didn’t come all the way across the country to see Californians…I see them all the time! Anyway, Harry, with his friend Kai, hails from Santa Rosa, but now lives in Boston. He told Chris that he was a singer. Chris wasn’t sure, but he thinks Harry told him an opera singer. No joke, well, unless Chris heard him wrong. The other cool thing about Harry is that he works at The Publick House in Brookline. I think we’re headed there on Sunday and he is working that night. It is a small world, isn’t it. 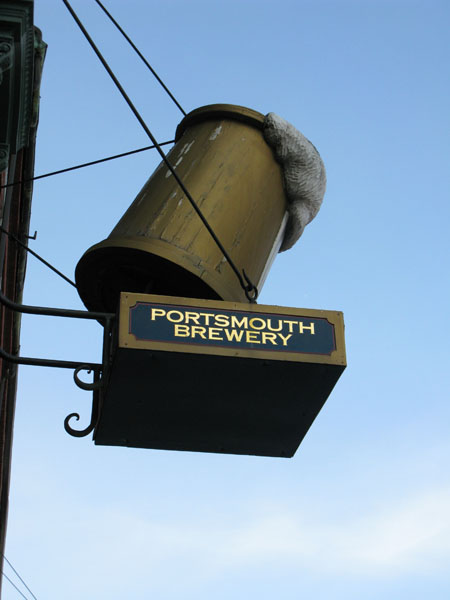 For our third brewery of the day, we went to Portsmouth Brewing, which is the sister brewery of Smuttynose. We met an interesting woman at the Smuttynose tour, who we saw again at Portsmouth. Telling the story in print doesn’t do it justice. So, if you see us somewhere be sure to ask about the Portsmouth story. Suffice it to say that Chris took one for the team and I owe him big! We also planned a reunion with Chris’ cousin Kerrie with her husband Andy. We hadn’t seen her in years and I think Kerrie and I talked non-stop. Poor Andy must have been bored stiff as we all reminisced about high school! I guess Andy took one for the team…way to go Andy!

It’s Saturday and we’re back in Boston…filming, Bruins hockey, and meeting up with our friend Brad Ruppert are all on the agenda for today. Oh, and by the way, it’s snowing and it’s expected to do so all day!