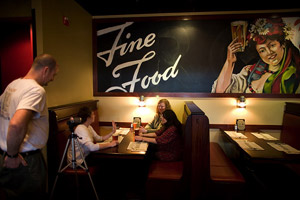 You can find an article by writer Lisa Morrison in at least one beer publication every month. She is everywhere. And that’s a good thing! On the one hand, I like to think of Lisa as just a beer writer, not a female beer writer. On the other hand, though, Lisa is at the forefront of embracing women’s “herstory” of beer and empowering women to be part of the modern beer world. So I am proud that she is a female beer writer.

I have read many an article that Lisa has written, but for whatever reason, her article on female brewsters that appeared in the Winter issue of Beer Northwest really struck a cord with me. It got me to really start thinking about the powerful women making their mark in the beer industry and it inspired a sense of pride in me as a woman who appreciates craft beer.

We have met Lisa on several occasions, but on our recent trip to Philadelphia, we spent several days together. On that trip, my interest in women’s brewing “herstory” and the influence of women in the industry was piqued even more. Partly because I met another amazing woman; Suzanne Woods.

Suzanne has an incredible knowledge of beer and brewing, and she’s a spitfire to boot! Her day job is sales and marketing for Sly Fox Brewing in Royersford, PA, but her hobby is the In Pursuit of Ale (IPA) beer club for women. Suzanne was our press group’s hostess for Saturday’s itinerary and all of a sudden, it hit me…I’ve got to interview these women!

Lucky for me, they agreed to an interview. We sat down at Iron Hill Brewing in Phoenixville, PA to chat about their personal beer “herstories” and their thoughts on the future of women’s influence in the modern beer culture.

So step aside boys, we’re kickin’ down the door of your clubhouse. Grab yourself a pint and enjoy “No Longer a Boys Club”.