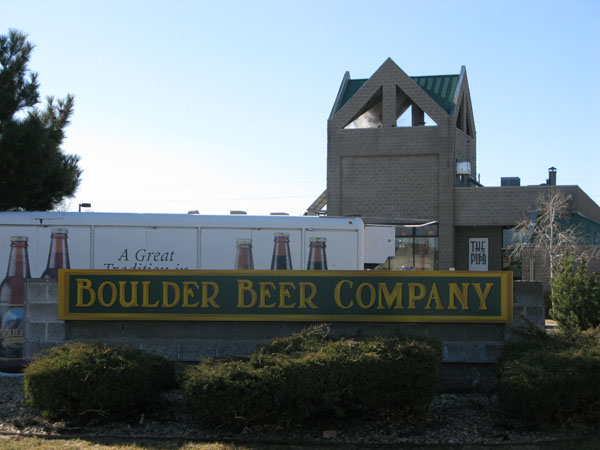 With one day’s rest from SF Beer Week, we left the disappointed pups on Wednesday morning and headed to Denver to meet up with our friends Matt and Michelle. The plans included beer touring of Denver and Boulder as well as attending the Beerdrinker of the Year contest. As last year’s winner, Matt is a judge this year. We are also friends with two of the three finalists, so it should be a good fun.

We had some time on Thursday morning before we picked them up at the airport, so we scheduled a 10am tour of Boulder Beer Company, Colorado’s oldest microbrewery. Celebrating their 30th anniversary this year, Boulder can also claim to be the oldest post-Prohibition brewery. 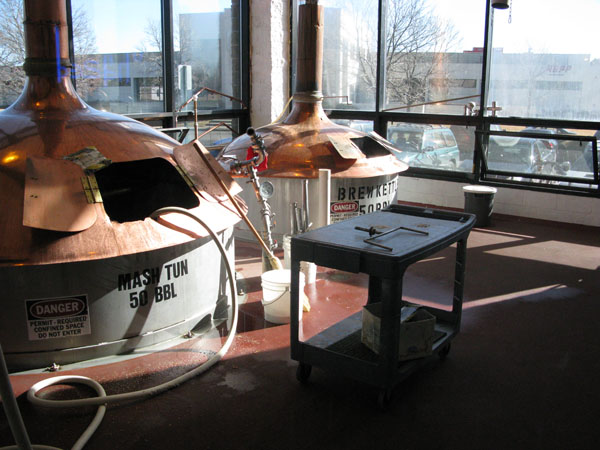 Boulder Beer Company was somewhat of a milestone for us because we think it might be our earliest brewery tour. I say ‘think’ because we sampled beer in the morning at Indian Wells Brewing Company years ago but are unsure of the exact time. This was certainly our earliest tour.

Since our time was limited, we got a quick tour of the 50 barrel brewhouse, cellar and bottling line. Though we rarely do brewery tours these days, Boulder’s was interesting because it was built in a time when breweries still got cobbled together. My favorite among the eccentricities was a pvc pipe that ran through the floor. It’s how the brewers communicate between the two levels. Very high tech. 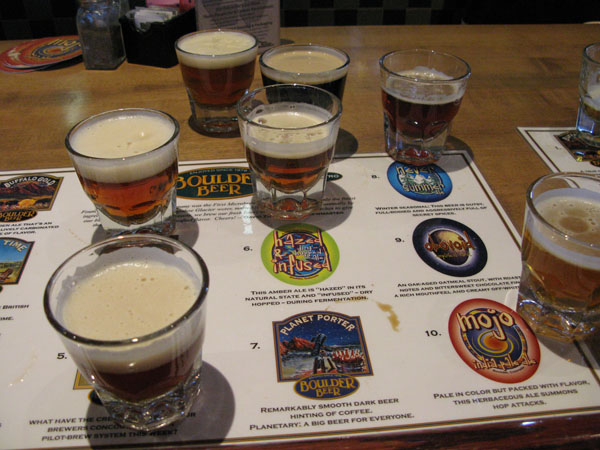 And of course we sampled Boulder’s beer. While we were familiar with a few of them, like Hazed and Infused and Mojo IPA, this was our first opportunity to taste their full range of almost a dozen beers.

The standouts for me were the Double IPA and the Mojo Risin, which I tried on both cask and draught. Merideth liked Planet Porter, which  she tried two ways, nitro and draught. We bought some beer and headed to the airport.  Thanks to Dan for taking time out of his day to show us around.

Together with Matt and Michelle, we headed to the opposite side of Denver to visit Ironworks Brewery & Pub. I was a little worried because I had seen reports online that Ironworks was closed and the 45 minute drive across Denver would be waste. It didn’t look good when we drove up, the pub was dark. Wanting to double check, we got out of the car and peered into an empty pub. Before the disappointment could set in, we heard someone say “Do you want to taste some beer?” It was the owner Mike who had just pulled up. We were a few hours early for opening but Mike was willing to open up to pour us some beers.

Over a taster set, we learned that Mike bought Ironworks a year ago and was busily trying to upgrade the pub, including a new brewer to improve the house beers. The beers were pretty good, especially the Stout and IPA. 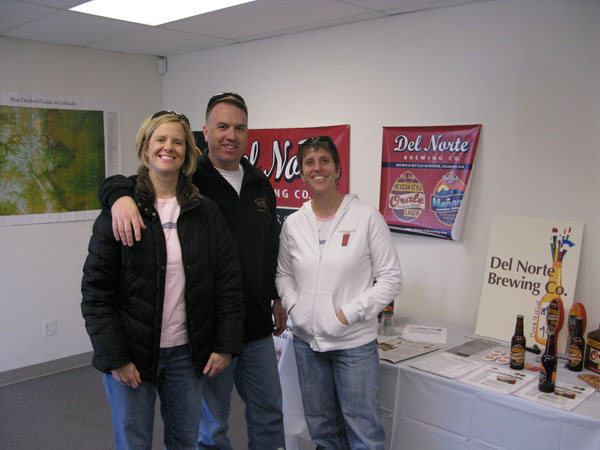 Next it was time to try some Mexican-style beers at Del Norte Brewery. Yes, Mexican-style beers. I wasn’t really sure what to expect; chili beers, lime beers, chelada or some other odd concoction from south of the border. But it was nothing like that. Del Norte has two award-winning beers, Orale and Manana, brewed with traditional ingredients. Orale, the lighter of the two, was a bit too tame for me. Manana, on the other hand, was a darker lager in the Dos Equis mold. Drinking a sample of the malty goodness, I could easily see myself ordering a few of these at a Mexican restaurant. You have to admire people for thinking outside the box. 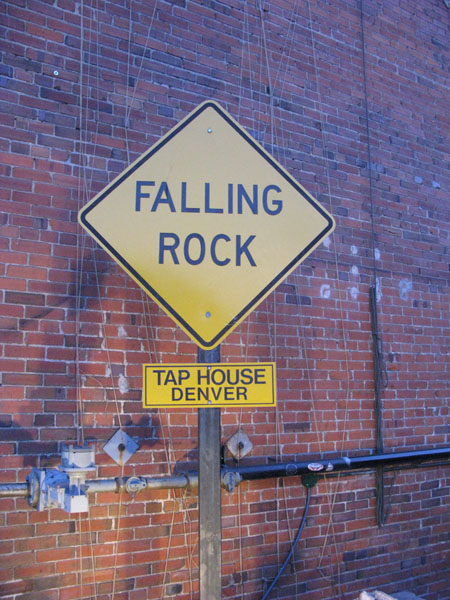 Finally, it was time to head into downtown Denver. After a short rest at the hotel, we headed to my favorite place in Colorado, Falling Rock Tap House. Over a few beers, we finally had time to catch our breath and catch up with Matt and Michelle. Pliny, Damnation, Titan IPA cask were my beers of choice.

We ended the evening at the Cheeky Monk, Denver’s entry into the Belgian beer bar scene that’s growing around the country. It was mentioned a lot during GABF and even though it was right around the corner from our hotel, we never made it there. Over our last pints at Falling Rock, Matt mentioned Cheeky Monk and a bell dinged in my head. Yes, we need to go there.

Cheeky Monk had an excellent beer selection though I thought Carlsberg and Lindemans looked oddly out of place next to names such as Orval, Rochefort, Malheur, and Saint Bernardus. 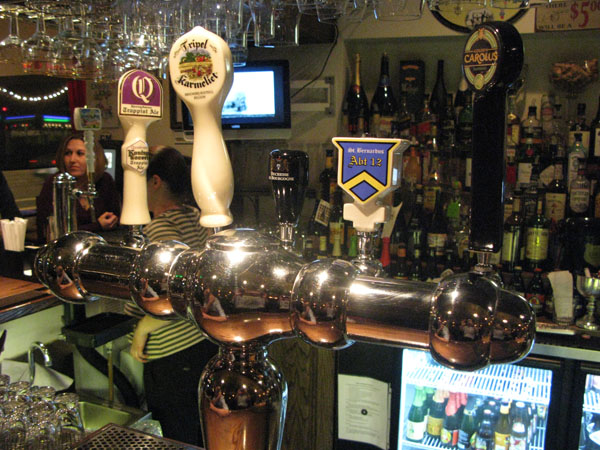 The food was typical Belgian, including many things we ate when we were there two months ago. Cheese Croquettes, Croque Monsieur, and Croque Madame.  Overall, a nice place to end the evening.

It has been a good start to our Denver trip and it’s not over yet.