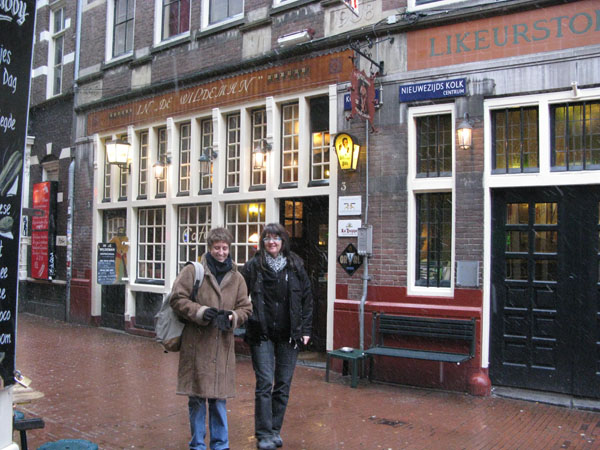 Going to bed at 3am is not something we’re used to and getting up at 8:30am on Thursday morning was a real struggle, but we had places to go. So, Chris, Ute, and I hopped on a train and headed for Amsterdam. Luckily, it was a 2 hour ride, so I got in some more sleep. We seemed to adjust to the time fairly quickly on this trip because, as Ute said, we haven’t had time for jet lag.

One afternoon in Amsterdam is really not enough time and I don’t necessarily recommend it, but it was all we had. So, of course Chris and I did what we do best: a whirlwind beer tour of the city. I would say that we dragged Ute around with us, but I’m pretty sure she was a willing participant and a real trooper. 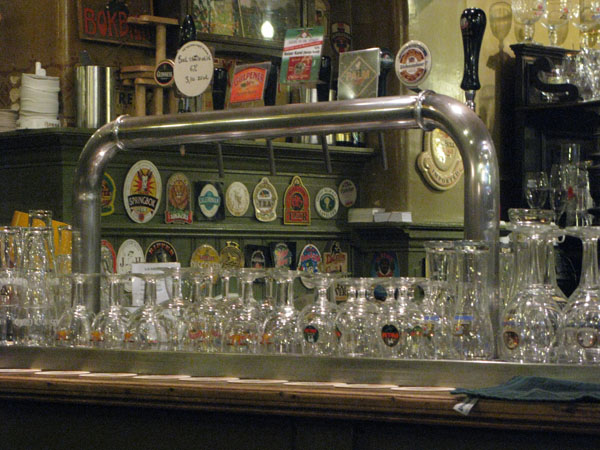 Our first stop was In De Wildeman, a great beer bar. One of the things I have found interesting about the Netherlands (and the Dutch speaking area of Belgium) is that you primarily hear English being spoken in a variety of accents. At Wildeman, we heard English, Australian, and of course Dutch accents, in addition to our trio’s American and German accents. It was a bit quiet inside and we naturally started whispering as we considered the beer list. A friendly sort, the bartender gently reminded us that there was no need to whisper. Then he continued his task of sorting and boxing glassware. It’s always a good sign when your beer bar has a whole wall of mixed glasses. After all, every beer does have its proper drinking vessel. We had a few different beers and watched outside as snow started to fall. It was all quite cool and cozy until we realized that the snow was very wet. With a few beers in our bellies and spirits unaffected by the wet weather, we pressed onward to get something to eat.

Along our walk, the snow fell harder (and therefore, wetter) and the wind was blowing. By the time we reached our lunchtime destination, we were all soaked. The place was nothing special, mostly a tourist spot, but it did the job and we were off again. There was this cat, though, that sat at our table begging like a dog. Now isn’t that cute. 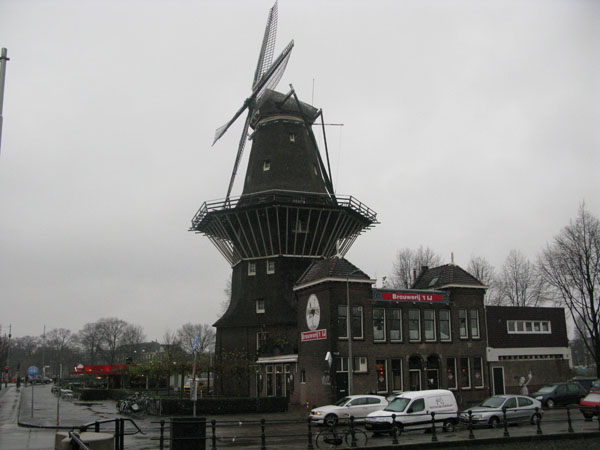 Brouwerij’t Ij was our next stop. A bit further away, we decided to take a cab to the old windmill where the brewery was located. Chris thought that on a summer day, the walk would have been nice. Even though I like to walk and get exercise on our trips, I still thought it was a bit far. In any case, it isn’t summer and Ij was almost as cold inside as it was outside. A funky place, the walls had peeling paint and the brewer had no shirt on. In his defense, he was cleaning the brew kettle, but Chris still thought it strange. Plus, you really don’t want to see most brewers with their shirt off anyway. Except maybe Sam Calagione…or Shaun O’Sullivan.

I had what they called a Pils, but it tasted more like a Belgian single. At first I didn’t like it. Probably because I was expecting a Pils, but it grew on me. I think I would have enjoyed it more if the weather (and pub) was warmer and my teeth weren’t chattering in between sips. Chris and Ute had the seasonal IJndejaars, flavored with licorice among other things. I think they had the same reaction as my “Pils”. The beer grew on them, as well. 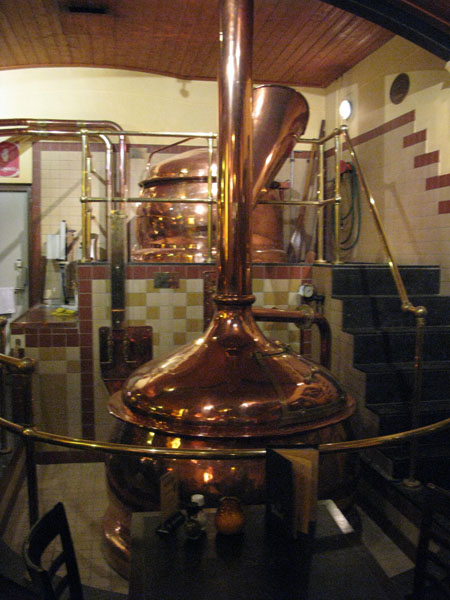 Sufficiently chilled, we hopped in another cab and went to De Bekeerde Suster, a microbrewery. We think the bartender was the owner, or at least he acted like it and he was friendly and helpful. He even showed Chris the brewery, which consisted of two copper kettles in the corner. Small, but shiny and beautiful. Chris told the guy that he wanted a set up like that in our house. The reply was simple, “No you don’t”. I’m still not sure why he said that.

Chris did have his favorite beer in Amsterdam, their Tripel.

Earlier in the day, we all said that we would need some time to rest before the Flogging Molly/Street Dogs show. Ute requested 2 hours. However, at this point, the 2 hour rest period was down to one hour before we were supposed to meet Ute’s friends across town. Oh well, we all went to the final destination of the day, ‘t Arendsnest. THE bar for Dutch beer. 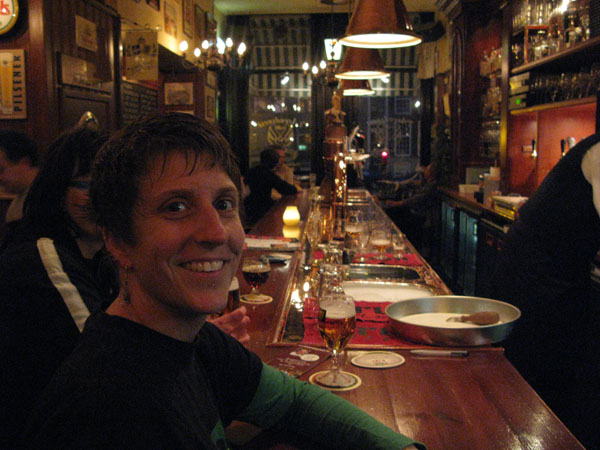 Many people have listed ‘t Arendsnest as one of the beer places you should go before you die. And there is a reason for it. The place was awesome and the owner was very hospitable. Except when Chris decided to ask him what his favorite beer was.  The question was deftly avoided with, “What is a favorite to me may not be a favorite to you”. Chris was persistent and asked which was the best Dutch beer he had. Getting a bit more annoyed, the bartender told us that he would not answer the question and went on to tell us that Michael Jackson attended the opening of ‘t Arendsnest. Michael apparently said that if he was to find the best beer in the world, he would no longer be the beer hunter. Chris was sufficiently satisfied with that. Never question the wisdom of the beer God himself. 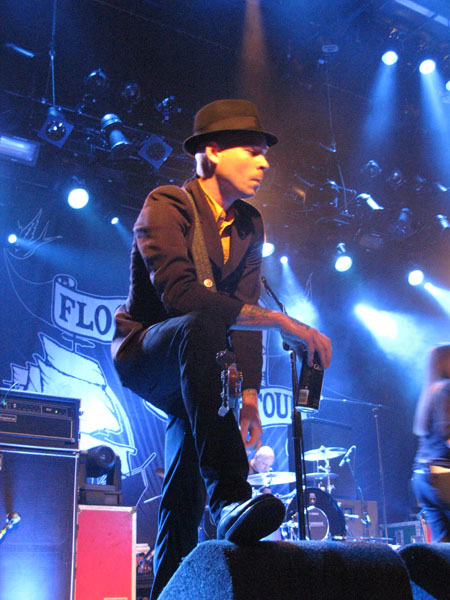 We ended our day with a quick stop at our hotel room and then off to the venue for the concert. We had a few beers at the nearby Irish pub with some of Ute’s friends. I even had Guinness, which Chris stedfastly refused to do. “I only have Guinness in Ireland”, was his douchey explanation. We did the same after the show, but by that time, we were all tired and decided to call it a night. It was 2am. Time to get to bed and start drinking beer again the next day. Such is the life of a beer traveler.

One Reply to “A Nice Winter Day Beer Tour”