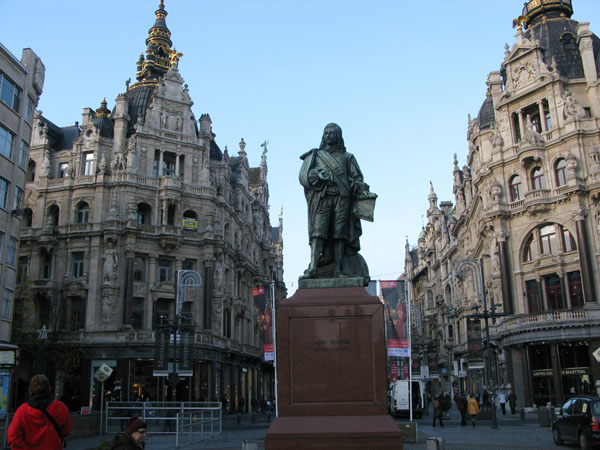 We arrived in Belgium early Wednesday morning after a somewhat bumpy ride over to Europe. Landing in the predawn darkness at Brussels airport, we quickly passed through passport control, collected our bags and were on a train to Antwerp.

The challenge of day was to simply stay awake, as we were seeing a Flogging Molly/Street Dogs show that night. Since we had time and wanted to conserve our energy, we had a leisurely day planned that included a good deal of walking and only two beer stops. Freshly showered, bright-eyed and bushy-tailed, we set out from our hotel to check out the old city center on our way to Antwerp’s only brewpub. 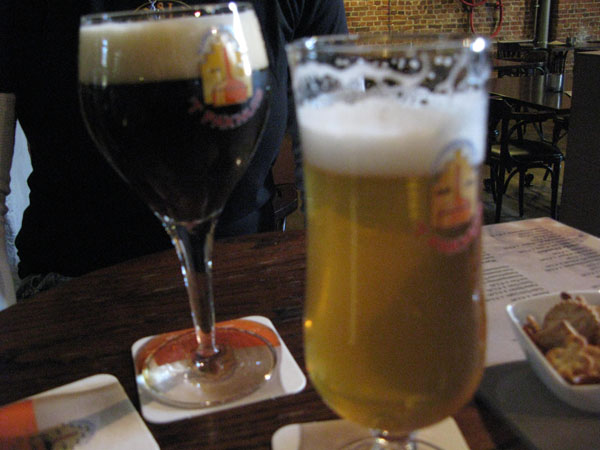 The first stop was ‘T Pakhuis. Located on a quiet street south of the old city center, we were the first customers of the day. They had three beers available, a Blonde, a Bruin and a 9.5% Tripel that I wasn’t remotely interested in drinking unless I wanted to go to sleep immediately. Merideth started with the Blonde, myself with the Bruin. And a good sign was that Merideth liked the beer. She is not a huge Belgian fan so to hear encouraging words bodes well for the trip.

Though we have been to Belgium before, it was always in the French-speaking regions. In Antwerp, they speak Flemish/Dutch and this was our first introduction to the language. It shares a lot of words with German so you would think we could pick it up quickly. But that was not the case. Since it was slow, we were able to enlist the help of the bartender with key phrases and pronunciations. It’s still a work in progress. 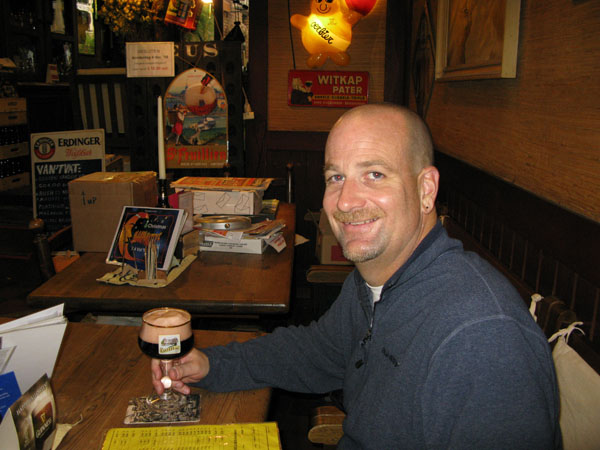 Our only other beer stop for the day was to visit the Kulminator, Antwerp’s most notable beer bar. Though they boast less than a dozen taps, the Kulminator is world famous for their aged beer selection.

The bar is cozy, rustic and quaint. The major decorating feature seems to be a who’s who of beer bottles, whether as a candle holder dripping with wax or a dusty bottle adorning a shelf. A couple of cats made appearances now and then from behind the bar. Besides being a beer geek destination, their clientele seems to be mainly older locals, which added to the quirky ambiance. 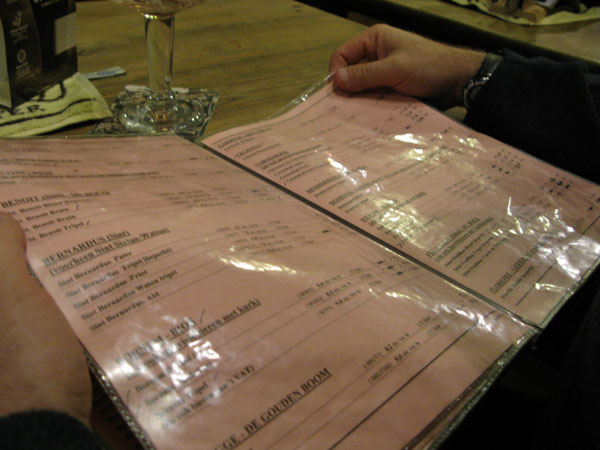 We were handed the rather thick binder that was their beer menu. To say it was overwhelming would be an understatement. While we perused the seemingly endless beer listings, I enjoyed a Kriek from Kasteel and Merideth had Belgian Pils. Trappists, Guezes, Krieks. You name it, the Kulminator had them going back to the 1990s. Some were expensive (20 euro+), others could be had for a price of a regular beer.

In the end, we couldn’t choose. Part of the problem was jet lag induced indecision, but the other issue was that most of the beers were in the 9%+ ABV range. We still had hours to go before the show and we wanted to be awake to see it. We left Kulminator with a heavy heart. We wanted to stay all day but we needed to move on.

We made it through the day and it was finally time for the Flogging Molly/Street Dogs show. We had a good time like always and I happily survived a partial collapse of the crowd barrier when I was at the front. Not my fault. 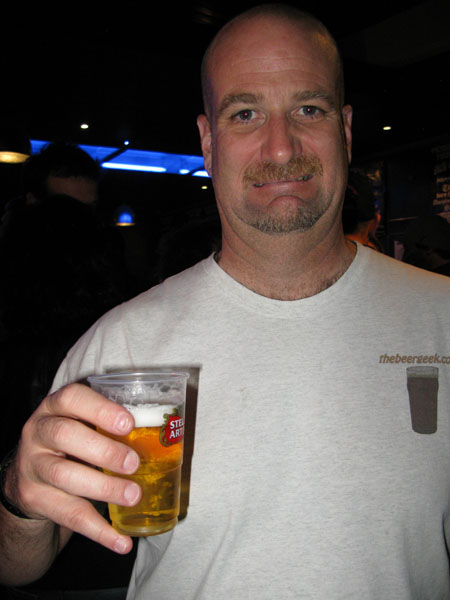 Being in Belgium, I had visions of watching Flogging Molly while quaffing a Chimay Blue or a La Chouffe. So you can imagine my disappointment when I saw the only beer they served at the venue was Stella Artois.

As many of you probably know, I am not a big fan of “wife beater”. For me it lacks any real flavor or depth and is just a gateway beer for any other non-descript macro lager. But we had an extra drink token and I decided to give it a try. Where else would Stella taste its best than in its home country? My opinion remains the same; even in Belgium, it tastes just like any other non-descript macro lager.

After the show, we met up with friends at a bar in Antwerp’s city center. Here, not having a bunch of beer at the show paid off as Bar Mondial sported a nice selection of beer including several Trappists. So, we finished up our first day in Europe staying up to the wee hours of the morning enjoying beers from Orval and Westmalle. As we got back to our hotel after 3am, we were pretty impressed with ourselves for making it through the whole day. It might be a while before we top it as a first day in Europe. 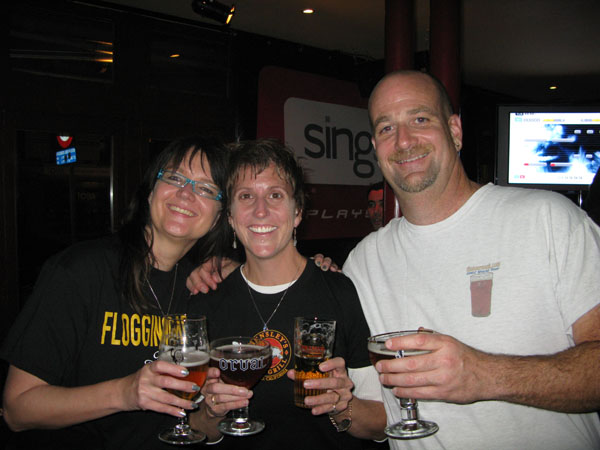 One Reply to “Quite a First Day!”