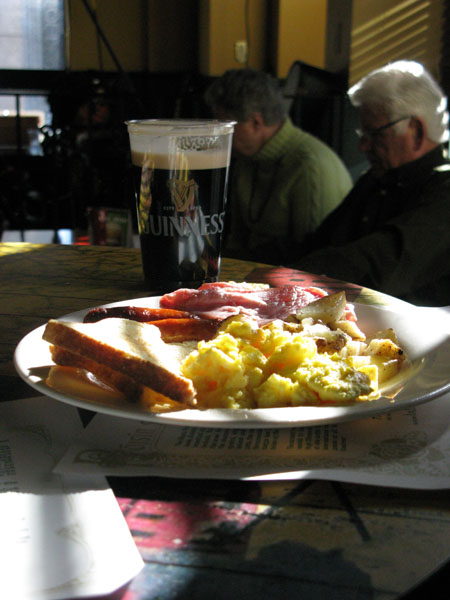 The plan for St. Patrick’s Day was to head down to the Black Rose for breakfast and then pretty much see what happened. Our only other commitment for the day was to see a punk show, headlined by the Larkin Brigade, at 8pm so we had more or less the whole day to hang – and that is exactly what we did.

It wasn’t without worries though. All weekend the Black Rose was packed with long lines of people waiting to get in. The last thing we wanted to do was queue to get in, especially with the cold wind blowing. By the way, it’s my theory that Boston wasn’t this crowded for Paddy’s Day until we started plugging it…

But as we rounded the corner, there was the sight we were hoping for… no line, just a bunch of smokers outside. And better yet, we ended up with a prime booth upstairs that overlooked all the action.

As tradition dictates, breakfast is of the full Irish variety, sans the black and white pudding, with a pint of Guinness. 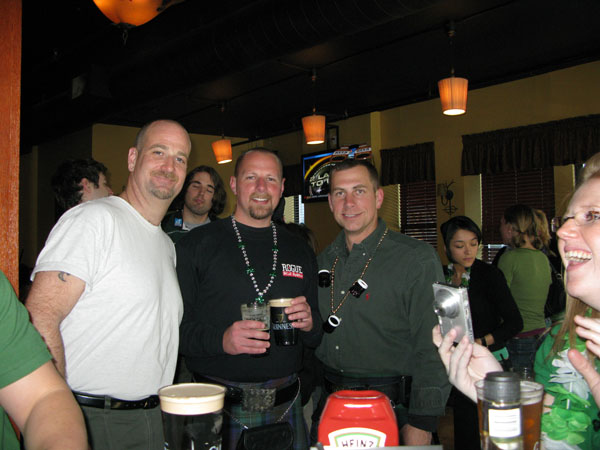 After we ate, we were somewhat undecided about what to do. We thought about abandoning our prime spot and hanging out downstairs – we even offered our seat to a group of Torontonians – Mike, Kate, Dave and Christa. In the end, we started talking to them and decided to share our spot. Plus, our friend Brad Ruppert and his crew showed up, so we had quite a group.

As you would guess, the people watching at an event like this is second to none. People always sport their best Irish t-shirt (“Irish today – hungover tomorrow”, “Kiss me if you’re Irish”, “Everyone loves a drunken Irish girl”), so t-shirt reading is a big activity.

I knew the party had really started when I saw a couple come out of a stall in the men’s room. Nothing like a drunken shag in the bathroom at the Black Rose on Paddy’s Day. 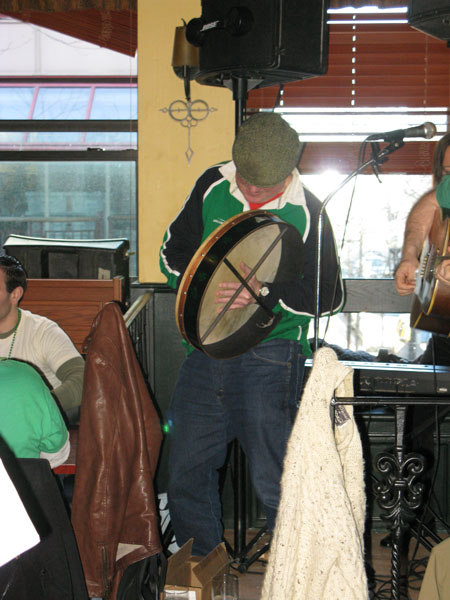 We ended up staying for seven hours at the Black Rose, talking with old and new friends, listening to music and enjoying the day. We were actually kind of sad to leave – we were having so much fun – but we had a long night ahead and needed to rest.

Our tip for celebrating St. Pat’s Day in Boston is to arrive at your pub of choice relatively early, then plan to stay. This way you can secure a good spot (close to the bar, prime people watching, etc) and you don’t pay the outrageous cover charges that every bar extorts from you.

The Candadians proved this point when they told us that the day before they were enjoying a good time at a pub. But, then they decided to go look for a new, fun pub to hang out in. Well, they were out of luck, as every other pub had a line and charged a cover. They learned their lesson and had no plans to leave the Black Rose until they were ready to retire for the night. 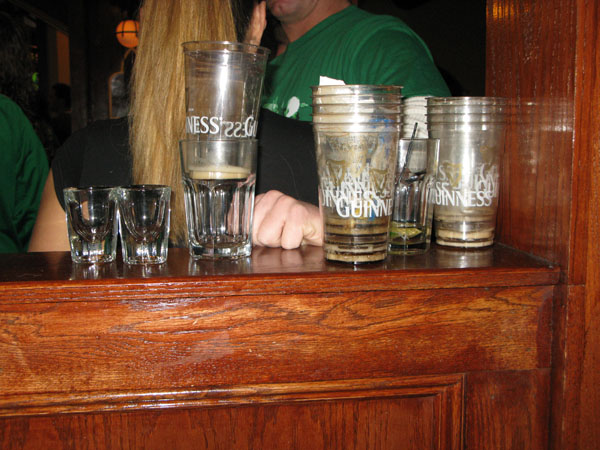 How did we hang out for seven hours, you might be wondering? First of all, we were drinking mostly Guinness, which despite it’s reputation of being thick and heavy is relatively low in alcohol. More importantly, we drank glass after glass of water to help with the pacing. I thought our waitress was going to be annoyed by our non-stop requests for water but she actually appreciated having a group of relatively sober drinkers.

Thanks to our friends and all the people we met for making it a great Paddy’s Day.

If you want to look at all our pictures, click here.

2 Replies to “A Happy Paddy’s Day”