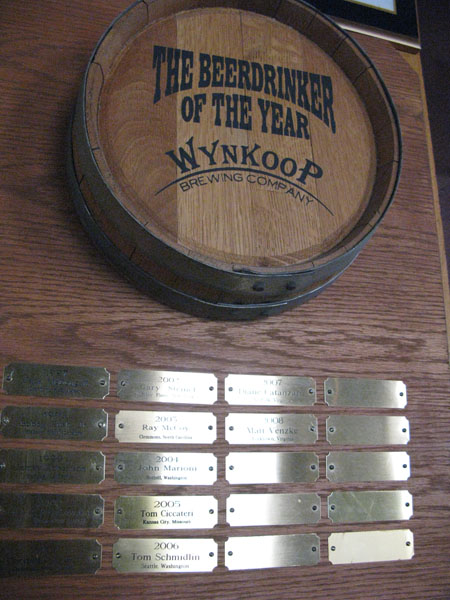 The main event of our trip to Colorado was attending the 2009 Beerdrinker of the Year contest. This year, we had two friends as finalists, Mark and Phil. Plus, Matt as a judge.

Cody, the third finalist and local favorite, claimed the Wynkoop as his local. We met Cody for the first time the previous night at the judge/contestant meet and greet and he seemed like a really nice guy.

We headed down to the Wynkoop a little early to get some food and beer in our bellies and let Matt bask in his last few hours of wearing the tiara. The contest was still a couple of hours away, but the Wynkoop buzzed with activity and merriment. We met up with our friends Eli and Fran as well as meeting fellow beer geek Chipper Dave for the first time. 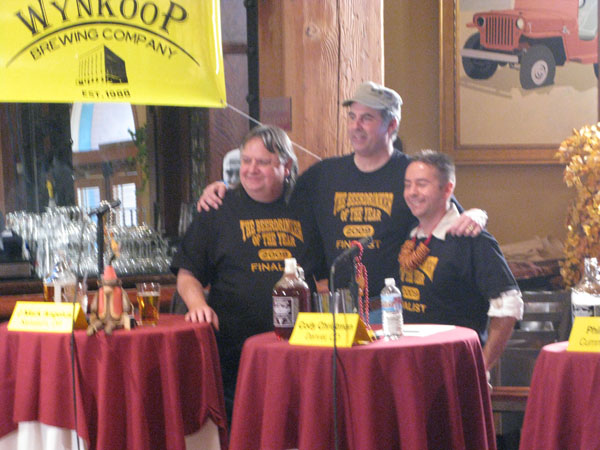 The contest is held in a side room behind the bar. Cody had a huge contingent of friends on hand to cheer him on, so the room was packed. Last year, Matt was the clear front runner, but this year it was a much closer contest. Both Mark and Phil held their own despite Cody’s homefield advantage. The judges asked great questions which the contestants fielded with skill. Kudos to Phil for his creativity, Mark for his wit and Cody for his passion. All three seemed worthy of the title “Beerdrinker of the Year”. 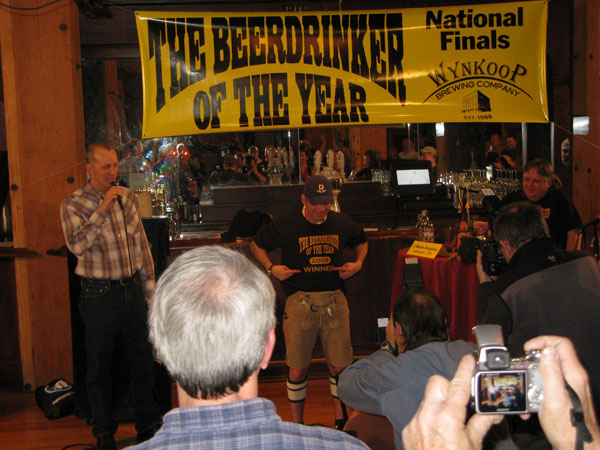 In the end, only one person can be the winner. And this year it was Cody. The winner gets free beer for life at Wynkoop and being local Cody will certainly benefit from this perk. The first winner from a non-coastal state, Cody also broke the run of winners hailing from Virginia.

We ended the evening by dining with Cody and his wife, Mark and his wife and Matt and Michelle. It was nice to increase our circle of friends and we look forward to having a beer with Cody in the future.

Not that there should always be a local finalist, but I have to say that the presence of a local gave the contest much more of a buzz than last year. Thanks to Marty Jones for being a brilliant host again this year as well as having the crowd toast Bill Brand.

2 Replies to “2009 Beerdrinker of the Year Contest”