It is already February and the Year in Beer is gearing up for San Francisco… After the great time we had in Alaska, we are looking forward to the YiB’s second installment.

San Francisco is special for a number of reasons. First of all, a significant event in craft brewing industry history happened in San Francisco in 1965; Fritz Maytag purchased the failing Anchor Brewery.

But on a more personal level, this trip is a homecoming. The Bay Area, specifically Oakland, was home for ten years. It is where we went to University and, more importantly, it is where our craft beer education began. So, it was only natural that the YiB would stop in San Francisco.

We will be joined in San Francisco by a host of people; our friend Rowdy who, as you know from my bio, is yoda in our beer story. Also, our friend Chris Devlin makes his YiB debut… the first of at least three… maybe four appearances. And some of our new friends from Alaska are coming down. Plus, there will be a whole cast of characters from our years living there.

We will be in the City February 14th-18th. The week is collectively known as “Beerapalooza” and this is how our schedule is looking right now:

In between, I want to check out a couple of new breweries… hit some of my old favorites like Triple Rock… check out the 3 new Belgian beer bars… and… and… 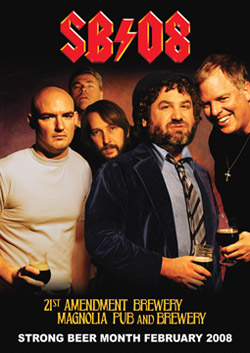 I would be remiss if I didn’t mention that on top of all I mentioned above, February is Strong Beer Month in San Francisco. Put on by 21st Amendment Brewery and Magnolia Pub and Brewery, each will be pouring 6 different strong beers during the month (or more likely, until the beers run out). Drink all 12 and get a commemorative glass.

With everything else happening, I seriously doubt I will drink all 12 over the four days we are in San Francisco, but there are few a definitely I want to try. So, I’ll have to settle for buying a commemorative shirt instead of earning the commemorative glass.