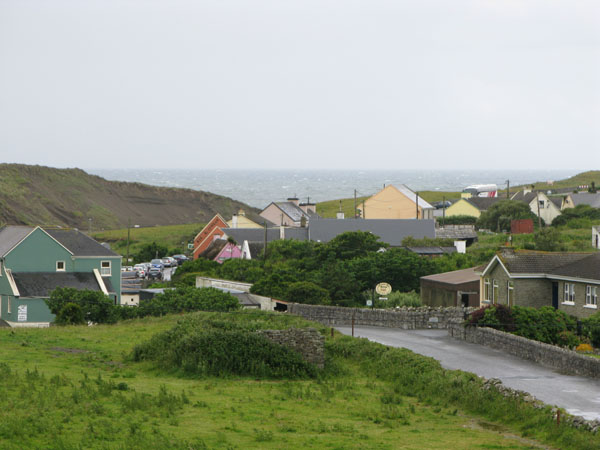 Saturday, Chris and I drove to Doolin, County Clare. Doolin might be our favorite place in all of Ireland. A certain travel personality, whose initials are ‘RS’, describes it as ‘touristy’, but we decided that “international” is a better word for it. There are a lot of tourists, but not the usual ‘eat at McDonalds while in Europe’ kind. People from all over the world come to Doolin for the hiking, biking and other adventuresome things to do in the West of Ireland. Of course we met a few cool people while there over the weekend.

Saturday evening, we started out at Gus O’Connors, probably the most popular pub in Doolin and our sentimental favorite. We intended to play some Scrabble, have a few pints, and enjoy the Euro 2008 match between Russia and the Netherlands. However, the manager decided not to show the match because it would interfere with the dinner crowd. We were actually going to do both, eat and drink, but alas, we headed to McDermott’s pub so that we could watch the game.

McDermott’s was actually the suggestion of Maureen, one of the bartenders at Gus O’Connors, who we see every time we go to Doolin. I finally decided to ask her how long she had worked there. She tried to tell me that it was her third night. I told her that I knew that was wrong because we had been coming for years and she eventually admitted that Chris looked familiar. More incredible than saying Chris looked familiar was that she has worked at Gus O’Connors for 28 years!!!

We had a great time at McDermott’s watching the game, eating and drinking. We shared a table with a couple from the Czech Republic. They have been living and working in Cork for three years. We explained our difficulty with the Czech language and we all agreed that our experiences in Czech would be better if we had some native speakers to help us out. They may be moving back to Czech in the future, so we exchanged e-mail addresses just in case we plan another trip there. 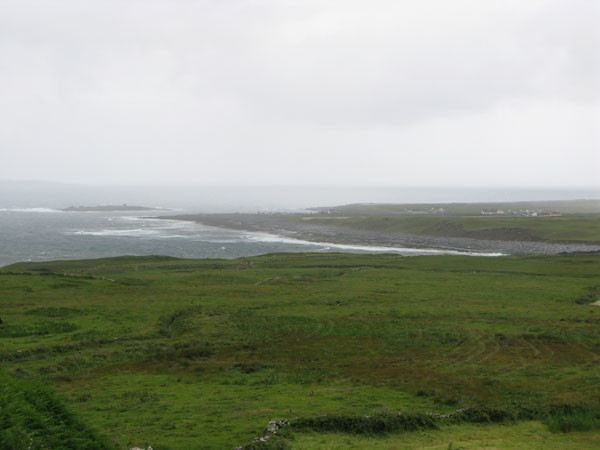 Saturday, a winter-type storm hit the area. A steady gale force wind blew all night and the rain came down in buckets! Maureen said it was hardest she had ever seen it rain there.

Luckily, we made it in and out of the pubs in between bursts and we never got caught in it. However, a local gift shop was not so lucky and got flooded. It is located at the bottom of a slope. The rain was out of control and everything washed down the hill and into the store. The fire brigade even came to pump out the water. They had not yet reopened when we left Doolin on Monday.

Sunday brought more unsettled weather but to make the day more of a struggle, we seemed to run into eejits wherever we turned.

At breakfast, we heard the Irish guide for a group of Americans say that the ferry ride out to the Aran Islands would not be too rough and not to worry. I believe the quote was something about a car ride would be bumpier. Okay, the one time we went out to the Aran Islands, the crew handed out barf bags because there was a storm raging. With few exceptions, all passengers utilized these nifty clear plastic bags and that day was not nearly as stormy as Sunday’s weather.  Unfortunately, we didn’t get a follow up on how the ferry ride scored on the barf-o-meter, but my guess is that it was high. The guide’s comment led one American woman to state, “It’s a sea storm.” Well, yea, you’re on an island! 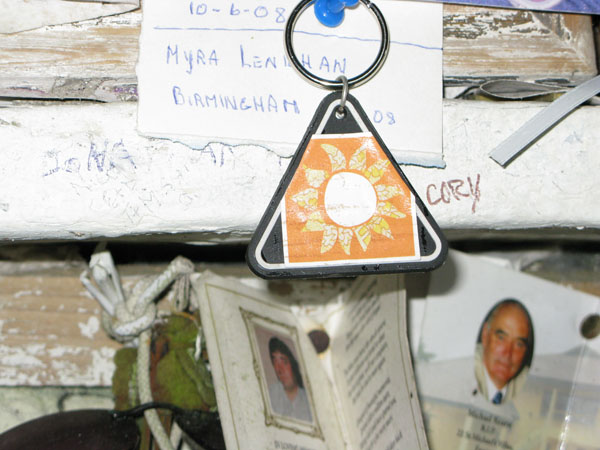 We survived breakfast and headed out to Biddy Early Brewery in Inagh to drink some beer and to do some filming.

On our way to Biddy Early, we made a quick stop and tried to do something about the weather. All over Ireland, there are holy wells where people wish for everything from being cured of a disease to wealth and prosperity. There is one such well, dedicated to St. Brigit, a few minutes from Doolin. We did give an offering to St. Brigit for good weather, so we’ll see if she shines on us. 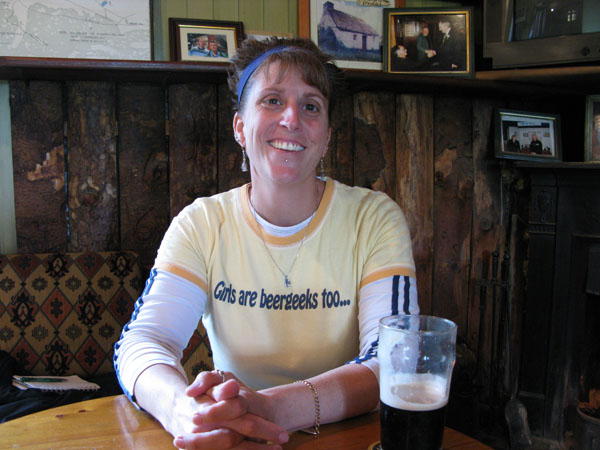 When we got to Biddy Early, three Irish lads were sitting at the bar. These guys proceeded to play video clips on their phone and play a selection of music including “Eye of the Tiger” multiple times at loud volume. And the best part, they did it while drinking a Baileys, a cider, and the third guy was drinking Budweiser with a straw.  And they burped loudly, too.  Oh yeah, and the ‘Budweiser with a straw guy’ sprayed air freshener into his mouth. Some would call it local color but we thought they were local eejits.

We kept hoping they would leave, but alas, they waited us out and we surrendered and left. Unfortunately that was one of the worst experiences I have had at a pub. We didn’t get any filming done, which is not too much a loss since the owners are trying to sell the place and it’s in a bit of flux. 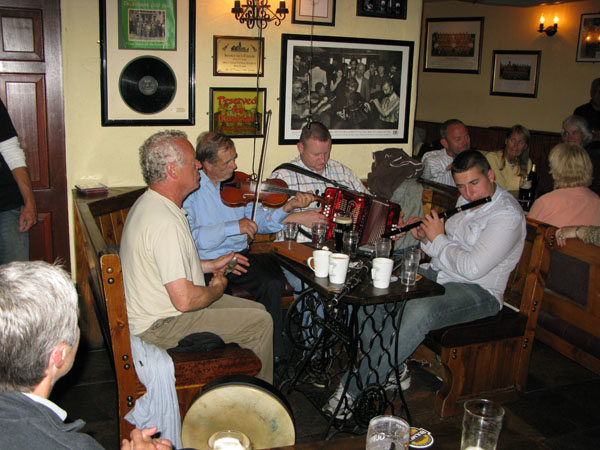 Sunday night, our last night in Doolin, ended on a good note. Back at Gus O’Connors, they decided to play Sunday night’s football match between Spain and Italy. We took our seats at the bar and spent four hours watching football, listening to Irish music and enjoying conversations with the other punters.

For those interested in our little ‘nitro challenge’, we have already amassed 23 pints of nitro beer. Of course, I am responsible for a lion’s share of these, since Chris is drinking the bottled Stout wherever he can find it.

Sunday night, the weather seemed to be clearing up a bit and we were hopeful that the weather would continue to improve as we traveled south to Cork on Monday.