This is the third post in Our Local Beer Scene series. The Maiden Publick House in Big Sur. 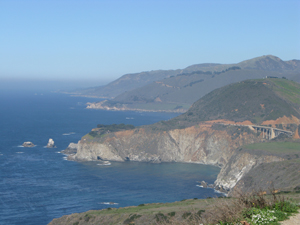 The Big Sur coast is the crown jewel of Monterey County. This rugged stretch of coastline south of Carmel is home to some of the most beautiful scenery in all of California. In past years, we would make the drive down the coast probably once a month to hike at Andrew Molera State Park and then enjoy an afternoon of beer.  But a few years ago, Andrew Molera stopped allowing dogs off the leash so we stopped going down the coast.

Which is somewhat a shame because Big Sur has a little gem of a pub, The Maiden Publick House.

Having not made the trek down the coast in over a year, we have been reminding ourselves recently that we needed to get down to The Maiden. With our Local Beer Scene posts, we finally had a need to head south on Hwy 1. So, on a gorgeous last day of January, we drove down the coast to spend a pleasant afternoon in the sun enjoying good conversation with friends and a few beers. 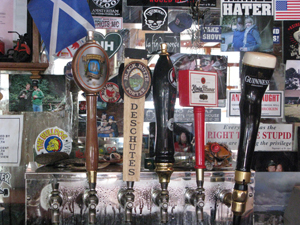 The Maiden had a nice selection of beer. Five taps were complimented by a unknown number of bottle selections. I say unknown because I don’t think they really had an updated beer list and our friends kept coming out with beers I didn’t know they had. Drakes IPA, all manner of Speakeasy beers, Mad River, Flying Dog, North Coast to name a few.

They also have, I believe, the only Santa Cruz Ale Works handle in Monterey County. So, I spent the afternoon enjoying Ale Works’ IPA. My big beef after Monterey County not having enough good beer places would be that we can’t get a variety of the Santa Cruz beers locally. Kudos to The Maiden for supporting our neighbors on the Monterey Bay.

The only black mark on an otherwise enjoyable day was that the kitchen was closed as their stove/grill fan had crapped out. But we were able to improvise with some burritos from a nearby stand.

Warm sun, beautiful surroundings, good beer and lively conversation with friends. Life is pretty darn good. I would encourage anyone who needs a little getaway to head down the coast and visit The Maiden Publick House.

The Maiden Publick House is located on Hwy 1 in the building just past the River Inn.