We will be the first to admit that Monterey County is not a beer mecca – definitely not a place that people would expect passionate beer lovers like us to live. But this is where we grew up; it’s home and we have to take the good with the bad.

Hey, if life has to have challenges like finding good beer, what better place to do it than on the beautiful Monterey Peninsula. And in the end, when you have to ‘settle’ for Sierra Nevada, things can’t be too bad. Don’t get us wrong; there are a number of pubs, restaurants, and bottle shops in the area that have nice beer selections and we can occasionally can be found at any one of them. But the focus of this series of posts is to highlight those places that go above and beyond just a nice beer selection.

First up is our home away from home, Ol’ Factory Cafe. 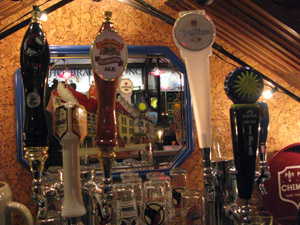 Every now and then, there are adverts in our local papers for establishments claiming to be the new craft beer heaven on the Peninsula, but in the end they pretty much have the same beer as every other place. When we first saw an ad for the Ol’ Factory Cafe in Sand City last year, we were skeptical; we had just seen the claim too many times before.

We were wrong to be skeptical. OFC is working hard to build a unique and eclectic beer list with 12 tap handles to compliment a selection of over 40 bottles. Whether interested in a sour ale from Rodenbach or a pint of Green Flash West Coast IPA, the beer list has something for all tastes. Our Bay Area beer friends who have stopped in have been pleasantly surprised by our little slice of heaven. 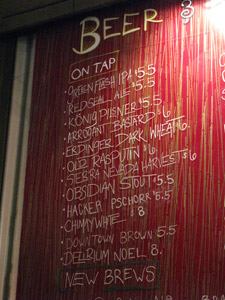 To accompany the great beer selection,  OFC has a tasty rotating food menu, including a cheese plate, charcuterie platter, beer brats, and fish tacos among other items. They do breakfast, too, including “Renee’s tin roof toast”, french toast made with housemade beer bread.

Ol’ Factory Cafe is a “green and sustainable” establishment that strives to run a zero waste operation. In addition to beer, they serve fair trade coffee, teas and other hot drinks in EcoCups. Even the unisex bathrooms, they even have cool waterless urinals.

Kudos to Morgan Christopher, the owner, for having the vision to open such a great beer destination on the Monterey Peninsula. The Ol’ Factory Cafe is located in the “West End” of Sand City, a town that reminds us a lot of West Berkeley in the early 1990’s; cool, hip, and up and coming.