The 175th Oktoberfest in Munich opened yesterday with huge crowds, large beers and cool weather. While we missed the “O’zapft is!” moment at the Schottenhamel, we were outside and witnessed the cannon shots signaling that it was time for the beer to start flowing. 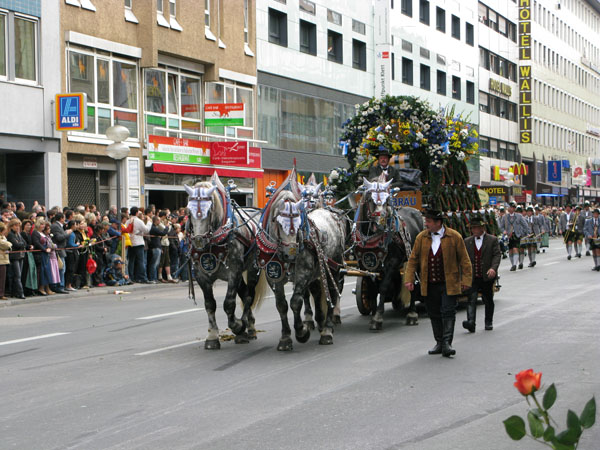 Our day began with the Grand Entry of the Oktoberfest Landlords and Breweries… a parade.  Each of the six Munich breweries plus the landlord of each tent is represented in the procession that begins in central Munich and ends up at the Theresienwiese, the site of Oktoberfest. There were also bands, a couple of clowns and plenty of horse poop. The only thing missing was the Shriners in their little cars. As the last few paraders were passing, we joined the masses streaming towards the festival grounds.

When we got there, most of the tents and outside areas were already packed. While we were watching the parade, thousands of people had been staking out their seats waiting for that special moment.

And that special moment is when the Mayor of Munich taps the first keg and proclaims “O’zapft is!” – which means ‘it’s tapped’. Oktoberfest is officially open and the beer can flow. 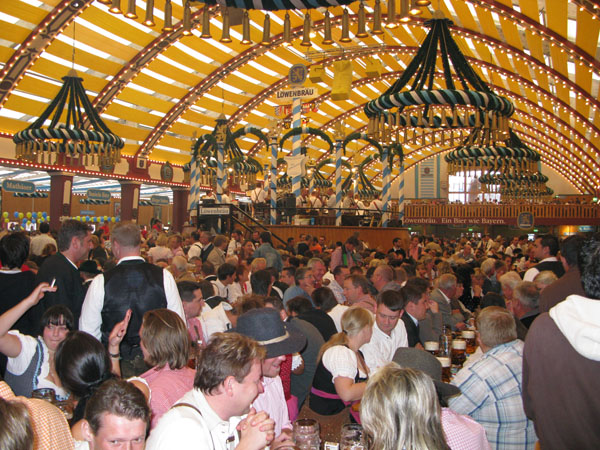 Next came the hard part, finding a seat. A seat is key, for without one you cannot get a beer. So, Merideth and I started trolling each tent outside and in (if we could get in) for a place to sit.  This task on opening day can be somewhat time consuming and frustrating.  You scan the sections of open spots and ask if you can sit there. Most of the time, the answer is no. And yesterday, adding to our frustration, was the fact that we had an agenda for filming; we needed  footage.

We ended up getting in two different tents, but never did find a seat. Which is probably for the best since despite Bavaria banning smoking at the beginning of the year, smoking was allowed at Oktoberfest. Therefore, the tents were smoke-filled, something we’re not used to. In the end, I did get some good footage. 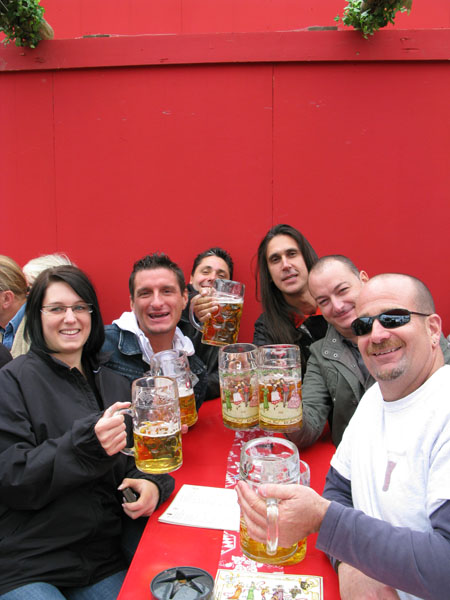 While on our quest, I actually got recognized. A German who I had talked to at the Bergkirchweih this past May saw me and came up to say ‘Hi’. Considering the number of people who were there yesterday, the fact that he saw and recognized me was amazing… unfortunately, he didn’t have a seat for us.

The Italians were probably the largest group of non-Germans at Oktoberfest, which seems odd until you realize that Italy is only four hours away from Munich. We finally found some seats outside at the Hippodrome, a Spaten tent, with a group of four Italians. So, after almost an hour and a half of searching, we finally had our first beers.

We were later joined at our table by a German couple. Our table, along with the table of young Germans next to us, enjoyed the chilly afternoon with liters of beer, pretzels, brats and obazda. Convenient for us, English was the common language. 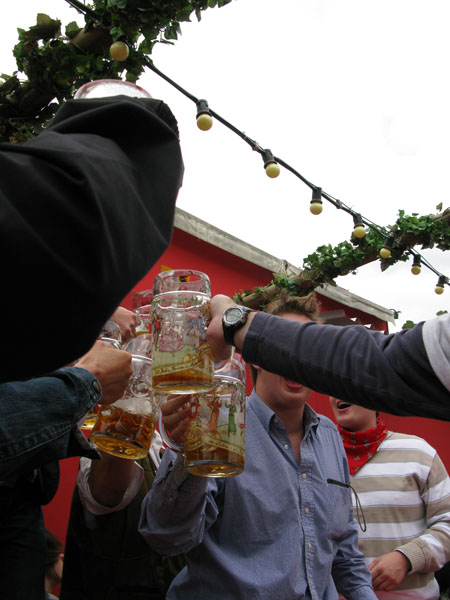 In fact, we were having so much fun that the manager came over and talked to the Italians and the Germans at the next table. Roughly translated, she said that the non-stop toasting behavior needed to wait another five hours to be appropriate. Those orderly Germans!

Besides the rumor that Pamela Anderson was hanging out at the Hippodrome, the other strange thing was that they had the cutest of the cute young girls going around selling breathalyzer tests. For 4.50 Euro, you blew into the little machine and in a few seconds you got your blood alcohol level. Was this to let you know if you should stop drinking? No, you got a certificate that proudly confirmed how shit-faced you were, so you could carry it around the biergarten comparing it to the other testees. At least that’s what the 17 year old who blew the 2.68 did. 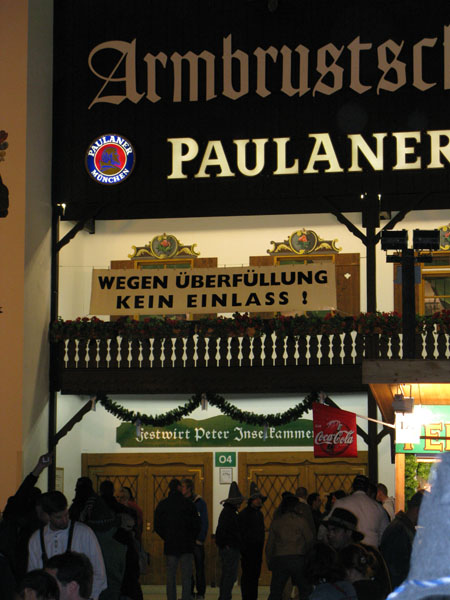 After three hours of fun and 4 liters between us, we called it a day. Though we will most likely never see them again, we had a great time with our Oktoberfest friends.  I think it backs up what we say about Oktoberfest. It might be hard work… it might be frustrating… it is a test… but the payoff is worth it.

We did return later that evening, not so much to drink more beer, but more to people watch. Saturday night means longs lines to get into tents, if they are even open, and lots of really drunk people. But the sheer mass of drunken humanity is something to behold. We gave the festival grounds a walk through and returned to Central Munich for dinner at our favorite restaurant.

Today, we’ll do it all again.