Life is a little different these days as beer travelers with an agenda. When we go to an event, there are things that we need to get done, namely filming. 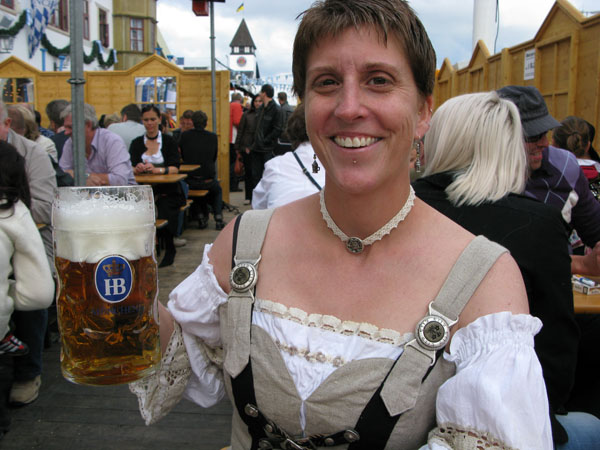 Sunday was the second day of Oktoberfest and we returned to the Theresienwiese under sunnier skies. Armed with a list of things we needed to shoot, we searched out the proper locations.

Arriving just after noon, we quickly strode into an Augustiner tent, Fischer Vroni. As the name suggests, they specialize in serving a Bavarian fish dish, Steckerlfisch… grilled fish on a stick. Unfortunately, this also meant that the tent stunk like fish, so we promptly turned around and left.

After walking through a few more tents, we settled outside at the Hofbrau Festzelt in the sun and much to Merideth’s comfort, under a heater. Here we had only one liter each as the service was very slow and the people not very lively. A sleepy crowd makes for bad video. Since it seemed to be easy to find a spot we decided to test other waters. 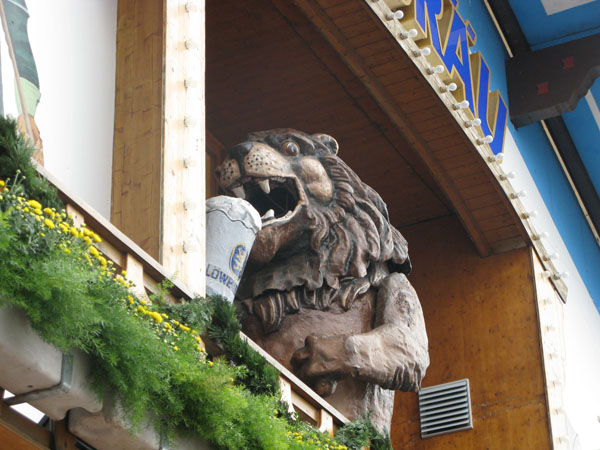 Moving on, we mistakenly went to the Lowenbrau Festhalle. I say mistakenly because we didn’t realize that the place was crawling with Aussies. I don’t mean to disparage a whole nation of people but twenty-something Aussies at Oktoberfest should be avoided. Drunken, loud and obnoxious, the main problem is that they travel in tour groups. So there are not just a few of them at your tent; there are hundreds.

After another quick liter, we moved across the way to the Winzerer Fähndl, a Paulaner tent. Here we struck gold. We were filming and the four Germans next to us thought Merideth said something funny, so we ended up spending the next five hours with them. 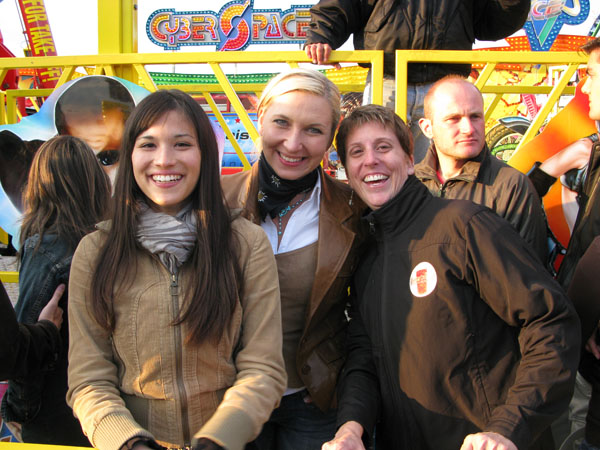 Merideth mentioned her desire to go on some of carnival rides and in our new friends she found two willing accomplices. The three of them ended up on two different puke-inducing rides.

To round out our night, we found ourselves inside the Paulaner tent; Merideth was dancing on the table and the next thing we remember, we were back at the hotel drinking hot chocolate.

All in all a good day after a slow start. Overcoming life’s little obstacles in the beginning, we finished the day off right. We got two more of the six Oktoberfest beers, Hofbrau and Paulaner, and met some new German friends.