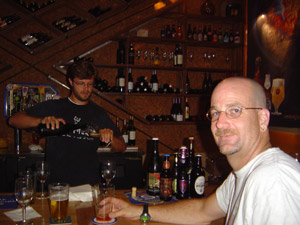 So we had another awesome night at the Ol’ Factory Cafe! Morgan was nice enough to invite us for an informal beer tasting and boy, was it big! There were 8 beers all between 8.5-10.5% plus Chris brought our Porterhouse (Dublin, Ireland) 10th Anniversary Celebration Stout which came in at 10%.

Little did we know, but there were also 2 bands playing tonight so the place got way jumpin’! My hats off to the bartender and resident beer guy Adam who did his best to serve us up, try to enjoy and savor the beer, and attend to his customers all at the same time! He appreciates good beer and knows his stuff and it would be great to really sit down with him when he isn’t working, so we can shoot the breeze about esoteric beers. I must say, he has quite the palate for exotic tasting beer! It was also fun sitting at the bar listening to Adam gently steer people in the right direction with beer. The best example was a couple of guys who came up and asked for Corona. Adam gave them 4 bottles of Augustiner bier and apparently they loved it. Now that is up selling! 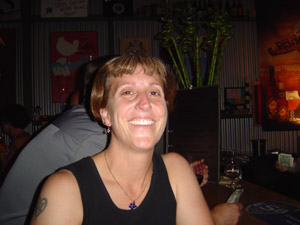 Back to the tasting. . .the beers were big and I don’t think I finished any of my tastes (I was also the driver for tonight), which is unusual for us. At any kind of tasting, the beer generally gets finished, unless it is totally gross and then it gets poured out. But these beers were just a bit big for me. The line up included triples, doppels, and a double pale ale from Flying Dog. Some beers are able to manage the high alcohol content, but others taste much too alcoholic for my liking. To be honest, I’m not sure how anyone could actually finish a whole pint of any of the beers we tried. But hey,someone must be able to do it, right?

We were lucky enough to be joined by our long time friend Kerry (a wine guy, by the way) in the tasting. Then I saw a few people from work and a group of people I know from high school. What could be better than over the top beer, a bartender who knows his stuff, old friends, and good music? Here’s to big beers and good times at the Ol’ Factory Cafe!