So how do we follow up a Saturday evening of tasting big beers at Ol’ Factory Cafe? On Sunday, we went to the local homebrew club’s annual tasting party at the house of our friend Steve.

As we know, the homebrewer has been the backbone of the craft beer movement in the United States and continues to provide the industry with great brewers who move up to the professional ranks. So it was with great pleasure and anticipation that we attended Keg Lube 2007.

And we were not disappointed. We had a great afternoon talking beer, travel and sampling some pretty good beers. And it was actually sunny and warm in Marina! 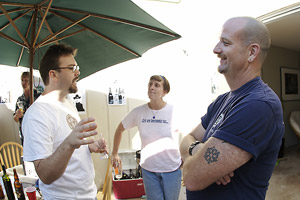 Kudos to Dave for his pale ale, Steve for his dark lager and Nate for his Belgian tripel… they were certainly the highlights of a beer filled afternoon.

We look forward to our next Keg Lube…

→ Next weekend kicks off Cal football season so before and after every home game you will find us at Barclays in Rockridge. Look for us at the bar. The first couple of games, we will be filming for a upcoming “One Pint at a Time” episode called “Our Fall Passion”.

→ The Berg episode is not up yet but I couldn’t resist posting More from the “Berg Band”.