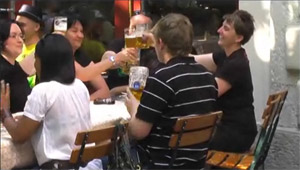 After we finished up the Year in Beer Franconia portion of our trip, we met our friends Ute and Wolfgang of floggingmolly.de in Cologne for the first of three Flogging Molly shows. The next night we saw the show in Munich and Vienna the night after.

We were planning on the three nights being an episode of One Pint at a Time… see if Merideth and Chris can survive large amounts of beer, the mosh pit, late nights, and early mornings. But, it wasn’t to be. First, our filming time was limited because we couldn’t bring the video camera to the venues. Then the star lost her voice after the Munich show and we only shot one clip in Vienna.

But all is not lost. We decided to put the footage together as a short bonus video. Highlights include: