It might be small but we do have a nice beer community on the Monterey Peninsula. Two of of our good friends are B & K who we met – where else – but Ol’ Factory Cafe. Everyone knows I am a HUGE social butterfly. One evening a couple of years ago, I was walking up to the bar at OFC to order a beer and I heard B order a Green Flash West Coast IPA. We started talking and have been friends with them ever since. 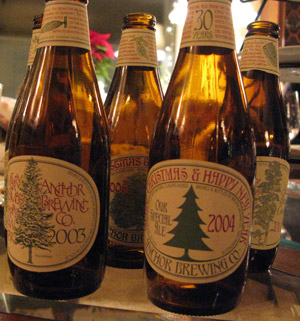 The beers had been properly cellared so they were all excellent.

And guess who picked them all correctly… me! By no means am I a good beer taster. I have never tried to be ‘Mr. Beer Palette’ but last night I channeled my inner beer douche and correctly identified the year for all five beers.

The 2003 was the easiest to pick out. It’s flavor was the mellowest and the spices most muted. 2004 and 2005 were not as mellow but you could guess by the amount of spice in the body of the beer. 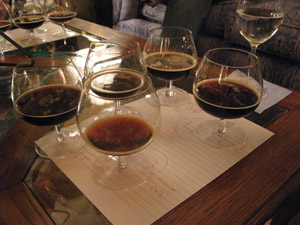 2006 and 2008 were the hardest to choose. They were easily identifiable as the newest years but choosing which one was which proved to be hard. I hadn’t had much of the 2008 this year, the beer disappeared from the Monterey Peninsula very quickly while we were in Europe. It really just came down to guessing. And I guessed correctly.

To finish off this enjoyable evening, a bottle of Stone’s 10th anniversary IPA was cracked open.

Thanks again to B & K for hosting such a great evening…