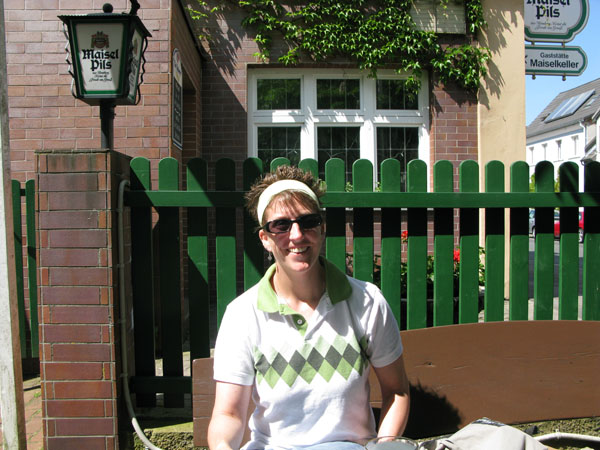 The first order of business on Monday was to head back to Bamberg. The problem was that Monday was a holiday – and a religious holiday at that. Unlike the States where everything is open, a holiday in Germany means everything is closed (except for restaurants we later discovered). By the way, I think the holiday is Pfingstmontag.

So, it was with a bit of worry that we approached Maisel Brau and much to our relief we saw a sandwich board out front – they were open.

But where were all the people? It was another beautiful, sunny day – a holiday and the biergarten was practically empty. Perplexed, we had a beer, Merideth a Pils and myself a Kellerbier, and decided to head into the Aldtstadt and to Bamberger Biertage. 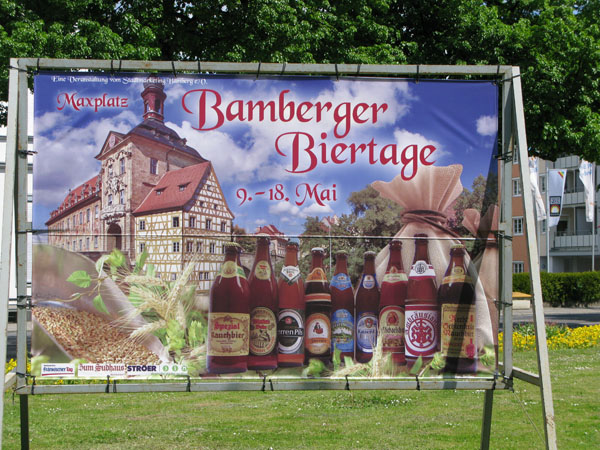 We really weren’t sure what “Bamberg Beer Days” was about, but we figured that there would be beer and maybe that was where all the people were. What we remember about Bamberg from last June was that it was wall to wall people. But when we started walking from the parking garage to Maximillian Platz, where the beer days was being held, it was like walking through a ghost town. Still no people.

We found the plaza and it was completely empty. There were scores of empty tables and each Bamberg brewery had an empty booth. We finally saw a sign and the fun didn’t start until 4pm – four hours away.

But all was not lost. There was a booth selling bottles of beer and we were able to procure four bottles for our beer tasting after assuring the woman we were not going to be drinking them there. And on an interesting note, the beer we purchased was the one we lost last year in the broken bottle disaster at LAX. 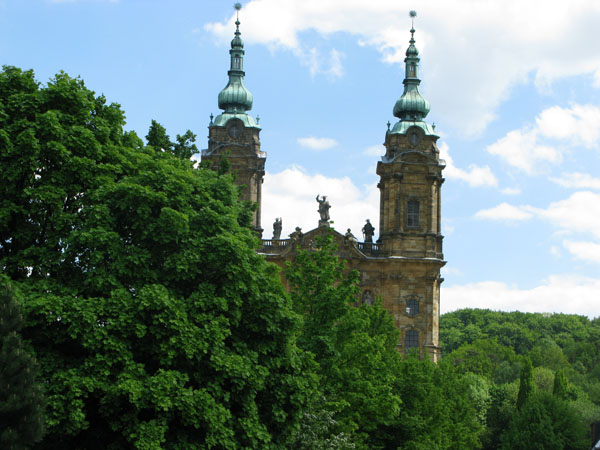 Undaunted, we decided to do the only thing one should do on a religious holiday – visit a monastery. Of course, this one had a brewery, Altes Klosterbrauerei. Why else would we be there? Funny thing is that I’m not even sure of the name of the monastery.

After an unexpected long-ish walk up a hill, we found all the people we had been expecting in Bamberg. Granted not everyone was there to drink beer, rather they were there to view the ornate monastery buildings and maybe even buy something at one of the cheesy shops selling every manner of religious object. 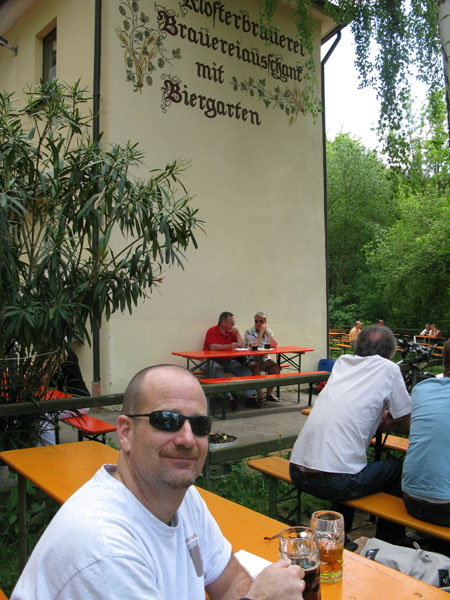 But a number of people, like us, found the pleasant beer garden above the cathedral. The brewery only had two beers, a Pils and a Dunkel, but you really didn’t need much more choice than that.

We ordered a couple beers and grabbed a seat overlooking the cathedral. It is hard to describe the peaceful feeling of relaxing in a beer garden; basking in the sun, enjoying the tranquility and a beer. To me, this sums up beer travel in Germany.

3 Replies to “A Holy-Day in Germany”