When we were leaving the house yesterday at 3am, we saw a mountain lion a quarter of mile from our house. While mountain lions are common where we live, seeing one is not. Ever the optimist, I took this as a good omen that our Alaska trip was going to be something special. And if our first day is a good measure, it will be. 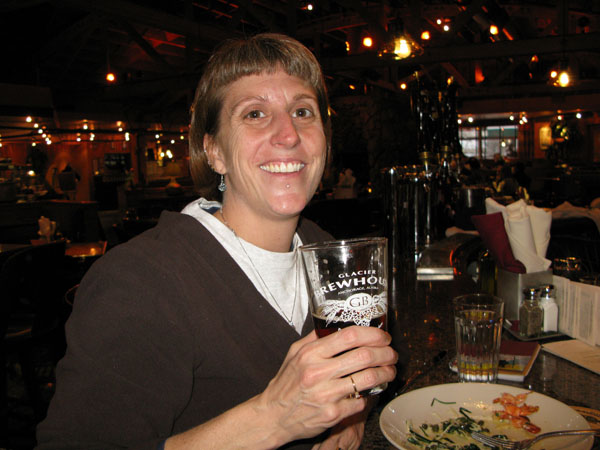 We arrived in Anchorage safe and sound around 1pm yesterday and by 2pm, we were happily ensconced at the Glacier Brewhouse enjoying some great beer and food.

I have to admit my whole concept of pacing myself and taking it easy went out the window fairly quickly. With our taster set done, my first pint was a cask version of their Double IPA. I’m sucker for anything on cask. Between the sampler and pints, we tried 8 different Glacier Brewhouse brews; all good and several brilliant.

The staff was quite friendly and we learned a lot about growing up and living in Alaska from our bartender, J.C., who is a 4th generation Alaskan. His great grandparents came to Alaska early last century during one of the gold rushes.

With renewed energy and a slight buzz, we walked around downtown Anchorage a bit. The cold limited our walk to a short one and the low cloud cover obscured the mountains that surround the city. Hopefully, there will be a clear day coming up so we can really see the natural beauty of Anchorage. 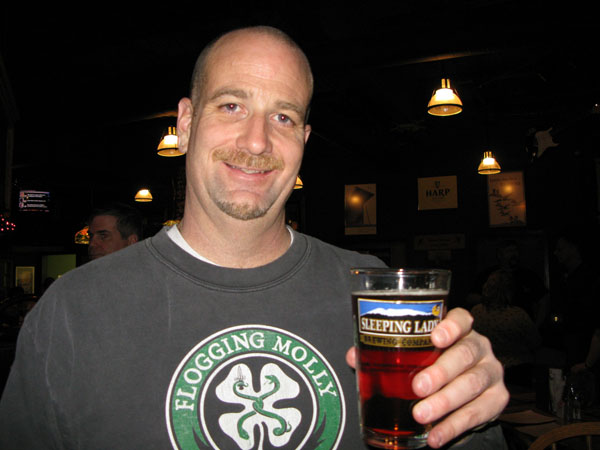 The double highlight of the evening was at Snow Goose Restaurant/Sleeping Lady Brewery which is conveniently a block from our hotel.

Prior to coming to Alaska, I contacted Jim Roberts, who covers the Alaska beer scene for the Celebrator Beer News. Besides providing a load of helpful information, he also invited us to the events that we went to last night.

The first event was the unveiling of special beer…. an imperial stout that was dedicated to the memory of Jim’s son-in-law who died in Iraq last January 20th. Proceeds from the sale of the beer go to erecting a memorial to 53 soldiers from the local army unit who died in Iraq. To say that this was a powerful and sobering moment is an understatement.

Following the beer unveiling, we went downstairs for a meeting of the Great Northern Brewers Club. If you have never been to a homebrew club meeting… find one and go because they are loads of fun. Last night, the GNBC members brought snacks and their latest homebrews, making it a great big beer and food potluck. 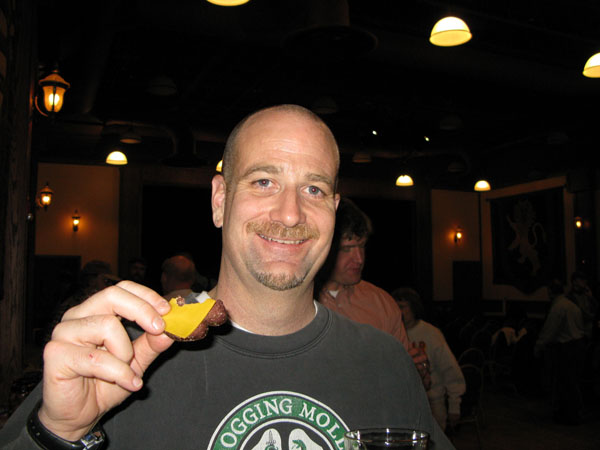 We met a very nice couple, Don and Tracey who were lower 48ers until a job brought them to Anchorage. Besides being homebrewers, they also made some great caribou summer sausage and moose salami.

The featured speaker was Sam Calagione from Dogfish Head. He gave a spirited and entertaining account of the history of Dogfish and their beers.

As the meeting was winding down, the long day finally caught up to me and realizing we were here for four days, I decided it was best to call it a night.

I want to thank all the friendly Alaskans we met yesterday… J.C. the bartender and Kevin the brewer from Glacier Brewhouse, Don, Tracey, Mike from Celestial Meads and especially Dr. Fermento himself, Jim.

So, the Year in Beer is off and running and if the first day is any indication, the year is going to be a great and wonderful journey.