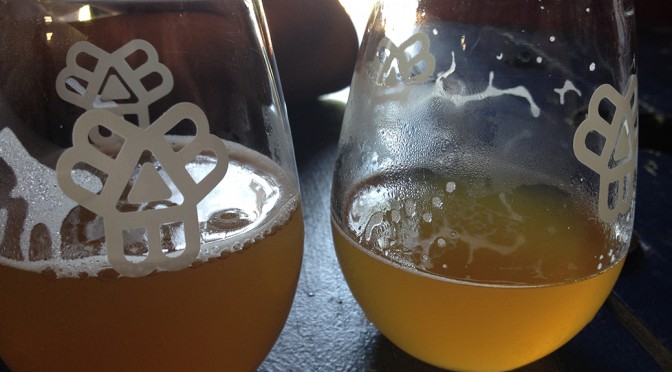 Seems like June 17th, 1989 was just yesterday. That day, we were crazy young kids getting hitched. Prophetically coincidental (or coincidentally prophetic), I’ll Be Loving You (Forever) by New Kids on the Block topped the charts.

More relevant to our future lives, the “microbrew” revolution was gaining steam with the likes of Boulevard, Odell, Marin and my present employer Drake’s founded the year of our marriage. Though “The List” was still a few years away from conception, I had already visited two breweries. Merideth, not yet 21 years old, theoretically had not visited any.

Fast forward 25 years (it seems to have gone by very fast!) and 886 breweries later, we are now well-versed beer travelers. Over the years, our adventures have taken us beyond North America to Europe, Australia and New Zealand. We have experienced great beers at the source and, most important, made many friends. It was one of these friendships that would make our silver anniversary extra special.

Posting on social media several months back about our upcoming special occasion visit, I got a response from Don with the Maine Brew Bus. On our previous visit, we had met up with him and the other fine folks behind Maine’s brewery tour company for a beer. And this time around, they graciously offered to take us around on our anniversary.

Not only would Don be our chauffeur for the day, he also arranged the visits to the two needed breweries for us to reach 900. At the appointed time, we met him and the bright green and yellow bus in Portland’s Old Port. Our “small but mighty” group were on our way for a day of beer drinking.

We started the tour at Allagash Brewing. Already on the list from our 2009 trip, Allagash was, in fact, my 500th brewery. Five years, 388 breweries and an expansion later we were back for another brewery tour.

Admittedly, I was a bit disappointed having to jump through the brewery tour hoop. Not having to drive, I was ready to get my drink on and the tour just delayed my fun. But what a tour it was. Along with 20 or so other beer enthusiasts, we donned our safety glasses and audio equipment and followed our enthusiastic guide into the Allagash brewery.

Standing in what used to be the parking lot staring at the cool White spice injector at work on the shiny new brew kit, I felt a bit silly about my usual ‘I don’t want to go on a brewery tour’ mantra. The new facility was quite impressive. And the tour now finished with a tasting in the beautiful new barrel house.

Amongst the barrels, we tasted White, Saison, Prince Tuesday (a collaboration with Rising Tide and Maine Beer Company), and finally the limited Confluence. What a great way to start the day!

Big thanks to Allagash for the anniversary gift. We’ll save the bottle to share on our 26th anniversary. Or maybe our 50th!

One Industrial Way will go down as one of the most important addresses in Maine beer history. Five years ago, we first visited the unassuming industrial park down the street from Allagash to add the then brand new Maine Beer Company to our brewery list. Checking in on their growth two years later, we wandered to the other side of the building to see Rising Tide making a small batch of beer.  Since then, both have graduated from the location to bigger pastures. Present day, its role as a brewery incubator continues with three fledgling brewing operations joining the Maine beer scene.

Bissell Brothers was the first new brewery of the day, our 899th overall. Located in the old Maine Beer Company space, the less than year old brewery was, of course, the brainchild of two brothers, Noah and Peter.

Bissell Brothers created a huge buzz with their initial offering, a 6.5% ABV IPA called The Substance. Cans were sold and kegs were drained very quickly of this popular new beer. Coming in a 16oz can and being their only beer available brought their debut brew heady comparisons to the Alchemist’s Heady Topper.

Comparisons really end there. While Heady Topper is big, The Substance was an easy drinking IPA. Pleasingly aromatic, Merideth, the self-proclaimed non-hophead, even enjoyed it.

As we sampled the The Substance, Peter explained having only one beer was never the plan, it was something that just happened. Pleasantly surprised by demand and trying to keep up, more beers were on tap for the future.

The only disappointment was there were no cans to buy to bring home.

It was a long walk next door to our milestone 900th, Foundation Brewing. Given that their business manager and owner, Tina Bonney was part of our tour group, it was probably apropos that Foundation was the chosen brewery.

Entering the small tasting room, we were greeted by co-founder/brewer Joel Mahaffey. As we chatted with Joel, he ran us through the Foundation lineup.

Five beers were available to sample, all Saisons brewed with their proprietary yeast strain. The two flagships were Eddy, described as their house Saison and Blaze, a Farmhouse IPA.

All the beers were excellent, very worthy of a milestone brewery.  Merideth pegged the lemon zest infused Saison as her favorite. Mine was Wanderlust, a 4.3% ABV dry hopped Saison. Employing five hop varieties, including one of my current favorites, Mosaic, Wanderlust had the huge tropical fruit thing going on which complimented the light body.

Our small group toasted our achievements, 25 years and 900 breweries. We thanked Joel and Tina for their hospitality and Don for making it all happen.

With our 900th brewery in the books, we were able to relax and celebrate our latest milestone. And Rising Tide seemed the perfect place to do just that.

Our second visit to the Rising Tide’s East Bayside location, we shared our story of the first time we met owner/brewer Nathan Sanborn at One Industrial Way. Back then, Nathan stood over his brew pot checking on his latest batch. Not able to try any beer, we chatted with him for a few minutes and promised to visit Rising Tide again to add it to the List.

Standing in the sampling area, Merideth and I marveled the brewery’s growth, and not just from the former location. The space that just last year had been empty was full of barrels and fermenters.

Our day with Maine Brew Bus was done. Dropped back off in the Old Port, we continued our celebrations with more beer and of course, lobster. We can’t thank Don and the Maine Brew Bus enough for making our 900th brewery visit on our 25th anniversary so very special.

View all the images from our day in Portland…