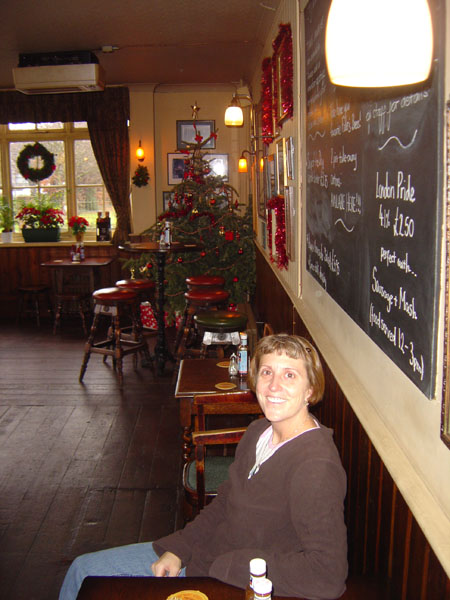 Even though I am still a few behind Chris, I hit a major milestone yesterday: I visited my 350th brewery at Fuller’s here in London! There were 5 of us on the tour and we were all beer people.

This was good because the guide, Jane Peyton (she has a pub architecture book called Pub Scene), didn’t bother with all the finer points of the brewing process that we have heard a bizillion times before. Instead, she gave us Fuller’s history, breezed through the tour, and then let us spend the rest of the time tasting beer. She even opened a bottle of the Fuller’s Vintage from 2005! It was 8.5% and had a strong alcohol taste. The hands down favorite, however, was the Chiswick Ale.

Another highlight on the tour was when we approached the fermenting room. At the door was a CO2 meter, which was blinking red and beeping! That meant that the CO2 level was too high to go in. However, as we stood nearby, continuing the tour, the meter suddenly turned green and stopped beeping. It was apparently now safe to enter, which we did. I made the others go in first since I wasn’t interested in being the canary.

The Fullers tour is something everyone should try to do when they are in London. Fullers is the last of a dying breed… not only are they still a family-owned independent brewer (a dying breed in itself), they are also the last of the historic London breweries. Oh, they also have the oldest wisteria in England.

As usual, we started out our trip with a bang. Today, I think, is the beginning of not feeling so groggy. . .just in time for Germany. I have to admit, I am looking forward to moving onto Munich. Don’t get me wrong, London is really starting to grow on us, but I personally can only take so much real ale. I think I am ready for some cold, carbonated helles!