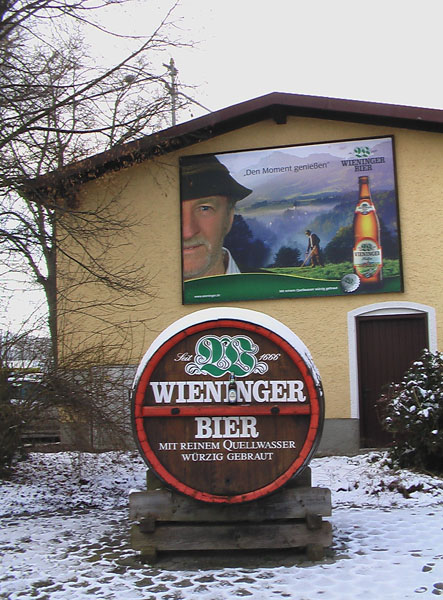 While we only visited 6 breweries on this trip, we were again reminded why we keep coming back to Bavaria; great beer! And we had a first in all our years of beer travel that I will tell about a bit later in this post.

And it is not just the great beer (oh, and the food too…) The reason we love traveling in Bavaria is also the atmosphere… to be the only tourists in a small town brewery with a group of usually older gentlemen at the stammtisch table enjoying a few beers and some conversation. In such a setting, you can really understand the culture of beer in Bavaria and it is really what beer drinking is all about.

So here is the lowdown on places we visited…

From Munich we took the train to Traunstein which is about two thirds of the way between Munich and Salzburg. There we picked up a car and headed out exploring. We were at a brewery, Privatbrauerei Wieninger in Teisendorf, within a half an hour enjoying a few beers and some lunch.

Privatbrauerei Wieninger was everything one could ask for in a small town brewery in Bavaria. We tried the Helles, Dunkel and Zwickl beer, an unfiltered version of the Helles. 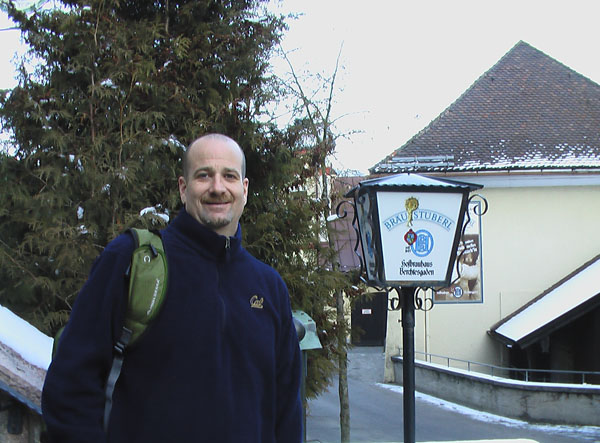 Hofbrauhaus Berchtesgaden had the most distinct lineup of beers, not having the normal Helles/Dunkel choice of beer so common in this part of the world. We had 4 beers here… a Pils, a festbier, “Jubilaumsbier” (a beer that had been brewed in Berchtesgaden for 600 years and Merideth’s favorite.) Our final brew was a Hellerbock, a light bock beer that also doubled as their Weihnachtsbier (Christmas beer). Not as malty as the much more familiar Doppelbock, the Hellerbock was quite flavorful. 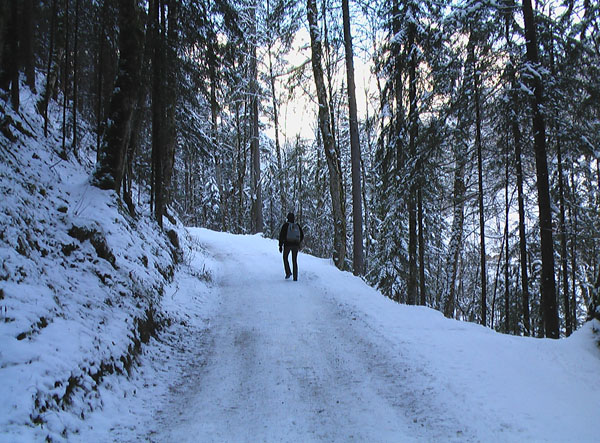 The following day was sunny, beautiful and 25 degrees… so we decided to go for a nice walk through the woods… especially since we saw a sign that there was a hut (and it was open) so what better reward for a winter hike than some beer and food.

Unfortunately, the hut was closed (and had been for some time by the pile of snow) but we noticed a sign for a second place… not a hut but a restaurant. But this one we found also closed despite the smoke coming from the chimney. On the way back, we noticed a small note on the sign we originally saw that said they were closed for an extended period of time. Despite the double setback, the hiking was amazing and much needed after a week of beer drinking. 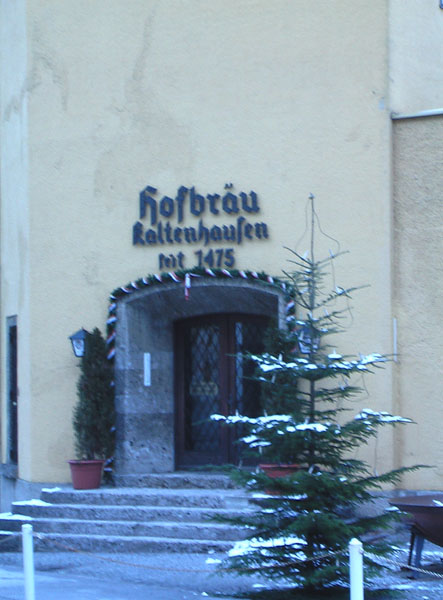 So to rescue the day, we decided to drive over into Austria and find Hofbrau Kaltenhausen. They brew beer with the Kaiser label that is found in Austria as well as Edelweiss label which we can find in the States, too.

It took us about an hour to find the small mountain road to get us over to Austria but once we reached the town, it took us only seconds to find the brewery. In reality the brewery is only 15 minutes from Berchtesgaden if you know where to go (take the road to Bad Durnburg – that is the first town in Austria across the border from Germany).

At Hofbrau Kaltenhausen, we drank the Kaiser Marzen (which was a helles), a kellerbier and “Bernstein” their flagship beer.

However, the highlight of Hofbrau Kaltenhausen was the festbier which was a version of a regular beer of theirs; Gamsbock. A flavorful hefeweizen that reminded me a lot of Schneider Weisse; maybe that is why I liked it so much. We tried to buy a couple of bottles in the store but they were all out; the beer goes very quickly.

The following day, we returned to Traunstein to drop the car off and spend the day. Why Traunstein? There are four breweries in the town. 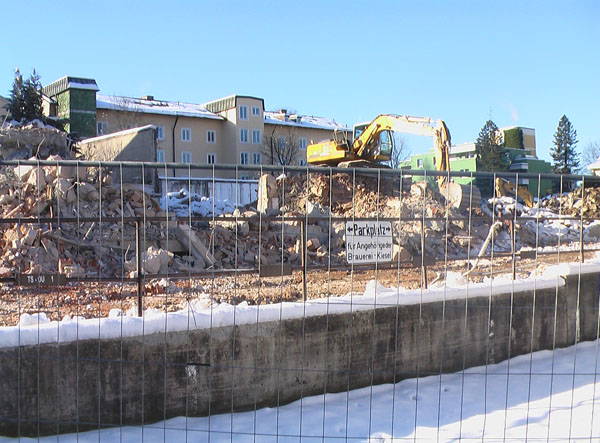 We became a bit concerned about the day’s adventures after finding the first brewery on our list. And we had a first for us in all our years of beer travel. We have gone to breweries only to find them closed for good; but one thing that has never happened (until now) was arriving at the first brewery to find it in the process of being demolished. Not a very good start!

We did get the remaining three breweries, so Traunstein was not a total loss!

Right around the corner from the demolished Maximillian Brau was Privatbrauerei Wochinger which bills itself as Traunstien’s smallest brewery. And it was open.

[The odd phenomena that Merideth pointed out was that you could be right at the door and have no idea if there is anyone inside… but once you open the door, the din of noise from the packed beer hall tells you it is open.]

At Privatbrauerei Wochinger, to compliment our wonderful lunch, we had the Urtrunk (helles), an amazing Dunkel that had strong coffee notes and one of the few true doppelbocks that we found on the trip. 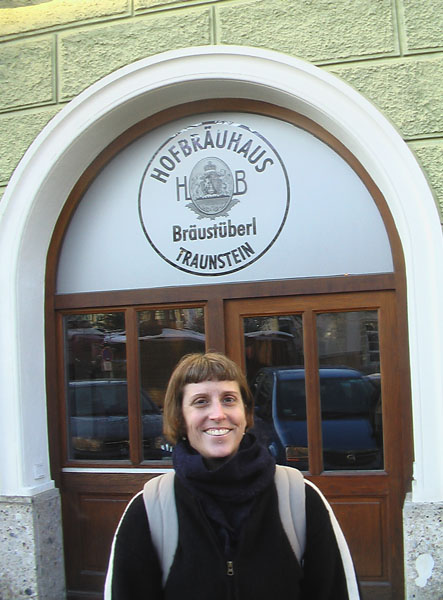 From there, we moved on to Hofbrauhaus Traunstein, the third Hofbrau of this trip and a new record. (The prior record was 2 Hofbraus in one trip).

Hofbrauhaus Traunstein is located in the central part of the city and a 5 minute walk from Privatbrauerei Wochinger. There is also a brewery museum nearby but we couldn’t find it though we really didn’t look that long or ask anyone (We were really focused on drinking beer). Here we had the Helles, a Zwickelbier (that was best of the trip), Furstentrunk, a 5.7% Pils and another dunkel… this one with flavors of toffee and caramel.

The final stop of the day was Privatbrauerei Schnitzlbaumer, located on the street just behind the Hofbrauhaus. We tried 6 beers here and I have to admit, even though the pope was watching over us, I hit the beer wall here and couldn’t finish the last… a wonderful bock beer.

Despite hitting the wall, here are the beers we tried… Helles, Kellerbier, Pils, Weissbier, Dunkel and the before mentioned bock.

With the day of beer drinking over, luckily, we had only a few blocks to walk to get to our hotel.

Though Traunstein is not in any tour guide, it is a great stop for any beer traveler. A pleasant Bavarian town with 3 breweries all within a few minutes of each other rates high in our book.