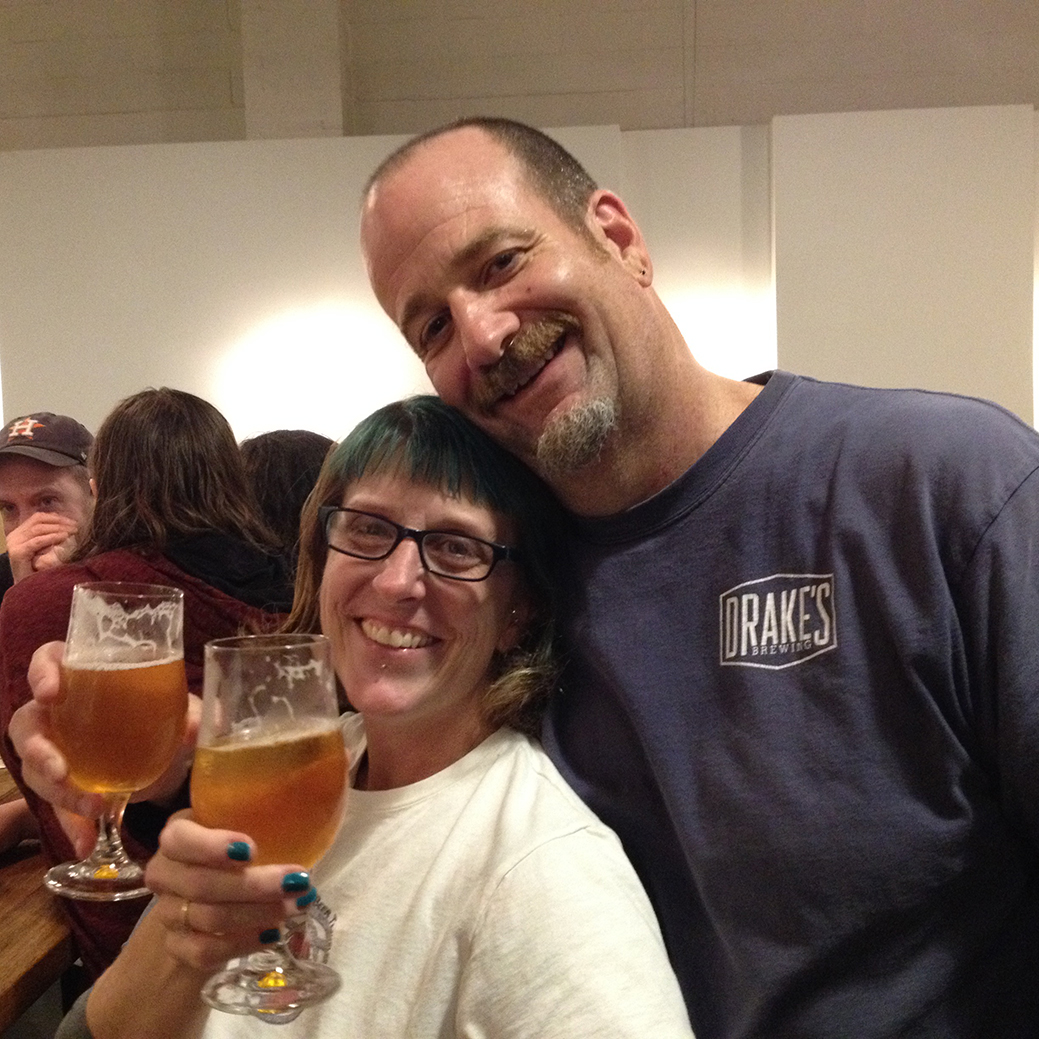 One THOUSAND breweries. A journey that began in the late 1980s culminated earlier this month in Seattle, WA with Merideth and I visiting our 1,000th brewery.

This was never really the plan. There was no plan when I started keeping track of the breweries we visited. But “the List” began to take on a life of its own becoming the focus of our travels.

We really didn’t think about 1,000 until we reached the 750 range. Then it was just a feeling “I want to reach 1,000 before I turn 50.” Only at #900, did Merideth and I start discussing the possible the milestone brewery. Ideas ranged from some exotic locale to that brewery we always wanted to visit, Budweiser in St. Louis.

When we reached #950, I realized I needed to start planning in earnest. Reaching out to a fellow beer traveling friend, he said something that stuck in my head. Whatever we did, it needed to be special. After some thought, special to us was an Urban Beer Hike in Seattle with a group of friends.

Fast forward to Merideth and I sitting at #994. On a rainy Saturday morning, we met up with that group of friends at Brouwers Cafe, the starting point for our hike. Over a few beers and some much needed food, Merideth and I caught up with our fellow beer hikers, most we hadn’t seen in a few years. At the scheduled time, 12:30pm, our group started our trek to the first brewery in a light drizzle. Our looping journey would start in the Fremont district and end in Interbay. In between, we would hit the brewery dense Ballard and Magnolia districts.

Despite the rain, it was a pleasant walk as we set out along the tree-lined path decorated in fall colors. The only hazard were the puddles. There would be plenty of time for wet feet without the added soaking of stepping into one of the small lakes along our route.

Covering territory we had walked on previous beer hikes in Seattle, we passed Hales, one of the first 50 breweries visited and the new Fremont Brewing facility. Before long and still relatively dry, we were at Lucky Envelope Brewing, #995 on “The List.”

Usually, Merideth and I would order a taster set. But today wasn’t about the beer, it was about enjoying the moment, enjoying time with friends. Quickly scanning the choices, Merideth ordered a Blonde Ale. I went with ENIAC 2.0 a 6.9% ABV Mosaic-based IPA. With pints in hand, we rejoined the group at a large table and continued the banter that began at Brouwers.

With a schedule to keep, Lucky Envelope was a one and done. Thankfully, more beer wasn’t long in coming as our second stop, Stoup Brewing, was literally around corner. With the weather, their rather large outdoor seating area was empty. We squeezed into the smallish, busy tasting room and joined the queue for beer.

Merideth and I played true to form with our beer choices; she with their award-winning Hefeweizen, me with the Citra IPA. Beers in hand, our group scattered about the tasting room looking to squeeze into a corner or along the wall.

Despite being a non-taster flight day, traveling with our little gang afforded us the opportunity to try a number of beers that our compatriots ordered. Getting a sip of the wonderful and also award-winning Stoup Porter I decided going forward  I would temper my hophead tendencies and branch out with my beer choices.

The special moment of the day happened when Chris D. pointed out a Fraggle sticker on the wall at Stoup. Merideth and I thought it very fitting that Fraggle unexpectedly became part of our big day.

In the Ballard district, ticking off breweries was like shooting fish in a barrel. After contemplating a second beer at Stoup, we again decided our schedule dictated we press on. Reuben’s Brews, our third stop, was another short walk.

A dizzying array of beer choices confronted us, 24 in all. While Merideth started with 5.7% ABV Belgian Pale I jumped off the IPA train and ordered the 6.2% ABV Robust Porter. After quick sips at the bar, #997 was officially added.

Lucky for our sizable group, a large table opened up in the crowded tasting room while we were lined up for beers. Sitting at the beer glass filled table with our friends chatting about this and that, I realized that we had made the right choice for our 1,000th brewery trip.

Maybe starting to get into a groove, Reuben’s was the first multi-beer stop. Despite my vow to broaden my horizons, I went back to the hops, ordering the Amarillo Fresh Hop Pale Ale.

Even on our 1,000th brewery day, we stuck to the code we developed all those years ago. Walking into a tasting room that the locals in our group weren’t sure met the brewed on premise rule, we verified with the bartender that in fact the beer was brewed elsewhere. I felt bad as our group of eight, who had just entered, all left.

Our backup choice and last Ballard brewery of the day was Hilliard’s Beer. It truly felt like the quiet before the storm as Merideth and I sipped on Chrome Satan, their delicious version of a California Common. Props for the name, an anagram for the well-known version from San Francisco.

With a number of beers under our belts, our hike leader, Dave,  recommended a quick stop for some food. After a few slices and pints at Ballard Pizza Company, it was time for the first of two long legs of the hike.

Darkness had started to settle in during our pizza and beer break. Bundled up, we set off through “downtown” Ballard heading towards the Magnolia district. Walking past hip shops, bars and restaurants, I felt oddly dressed in my shorts and rain gear. Thankfully, I wasn’t wearing a bright yellow rain poncho or I would have really felt out of place.

Through a park we came upon the Ballard locks. Officially called the Hiram M. Chittenden Locks, I had no idea they even existed in Seattle. The series of locks connect Lakes Washington and Union to the Puget Sound and looked beautiful at night lit up in the rain.

Arriving at Urban Family Brewing, there was not just one but two kids birthday parties happening. Seeing no cake, I moved on to the important matter of getting a beer. Easily the most eclectic selection of beers on the day, Urban Family specializes in French and Belgian-style Farmhouse ales.

For the last of the triple digit breweries, Merideth and I both ordered the Saison, The Flowers Are Always Asleep. Other beers ordered by our crew were Limesicle, an IPA with lime zest and the deep purple colored Herr Kinski’s Blackberry Thought-Forms.

Over these beers, we squeezed in a few games of Asteroids and Missile Command on vintage consoles.

The last portion of the hike to West Seattle was another long one. In a beer hike first for us, we passed a bustling rail yard full of locomotives and boxcars. Something that I would expect to be behind a security fence, we walked past as if we were walking through a mall parking lot. If I had dreams of dropping out of society to ride the rails as a hobo, this seemed my big moment to leap on a locomotive or car and really travel. Even after a bunch of beers, I think I made the right choice to continue walking.

Holy Mountain Brewing was aptly named for our thousandth brewery. For me, the day’s hike to reach Holy Mountain was the end of a long beer pilgrimage that started in 1987 at Triple Rock Brewery in Berkeley.

For the milestone beer at the milestone brewery Merideth ordered the 4.8% ABV The White Lodge Wit. My beer to mark the moment was Three Fates, a 4.8% ABV Pilsner-style beer.

Nowhere else to be, we celebrated over many beers at Holy Mountain. Eight miles walked. Six breweries visited. Milestone achieved. We can’t thank our friends enough for joining us on our special day: Chris D, Dave, Mandy, Link, Allie, Melissa, Renee, Mike, Russ, Phillippe. Special thanks go out to Dave for not only planning the hike but also keeping us on schedule during  and Chris D for letting us invade his work for our thousandth.

It truly feels like an end of an era for us. When we started beer traveling, there was a sense of adventure, such as finding the brewery in Italy with our only directions being that it was in the village’s main piazza. Today, with the sheer number of breweries and technology, beer travel has morphed into more a matter of logistics; how many breweries can we fit in a certain amount of time. We’re not sure what thebeergeek.com will look like moving forward but it will most likely more closely resemble our Zoigl experience rather than what we have done in the past. We hope you continue to follow along as we look for new beer adventures.

Here is a little video shot to commemorate the moment.

View all the images from our Seattle trip

6 Replies to “One THOUSAND!”