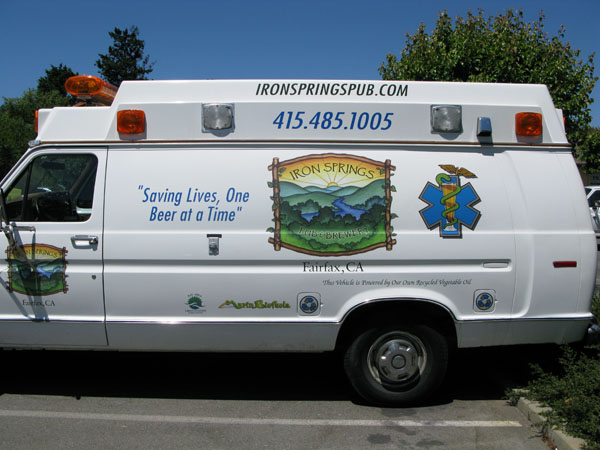 Yesterday we started our first North Bay beer excursion in 10 years, and so far it has not disappointed. We took the 3 hour drive up to Fairfax for our first stop, Iron Springs. You may be familiar with their beer ambulance that boasts,”Saving lives one beer at a time”.

Unfortunately, at this time, it may be Iron Springs itself that needs saving. They are having landlord issues, including a huge rent increase. My understanding is that they have no where else to go and may need to close. That would be a big loss, especially because the beer is tasty, the staff friendly, and the food great.

While at Iron Springs, we met up with fellow Aleuminati member, Rob. He had lots of information on the North Bay beer scene and had great insight into the craft beer industry. You can check out Rob’s blog Pfiff!. Thanks to directions from Rob, we then took the scenic route on to Petaluma and our second brewery of the trip, Lagunitas. 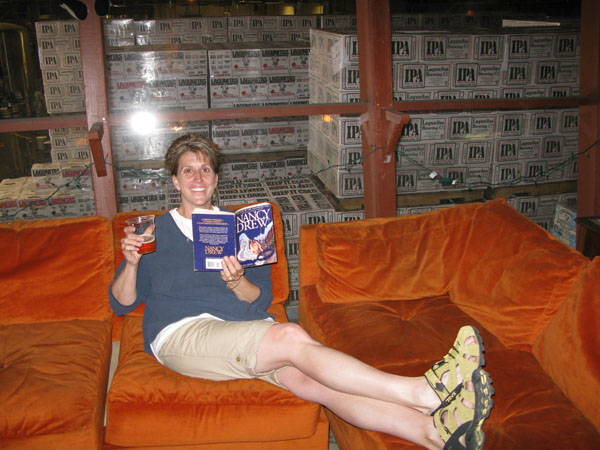 It’s amazing that this was our first trip to Lagunitas. We hung out in their loft overlooking the brewery, which the bartender affectionately called the “man den”. It felt like hanging out in someone’s attic. That’s me lounging, drinking Censored while reading Nancy Drew. The bartender went on to tell us that she went to high school with Winona Horowitz, better known as Winona Ryder. Our friendly bartender said that she should have known that Winona was destined to do big things, as she had a green mohawk in high school. Where is Winona these days anyway? Maybe one of you out there has an update for me…

One of the things that was especially nice about Lagunitas is that they serve you beer before the tour. As you can imagine, we skipped out after the beer. Oh yea, another highlight of Lagunitas is that it was my 390th brewery…Go me! 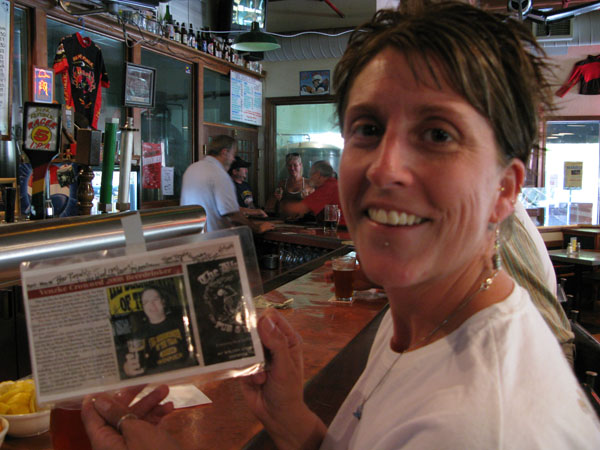 Next we went to Bear Republic in Healdsburg. This was a must for us, because our friend Matt Venzke (Beer Drinker of the Year) went there a few months ago and autographed his picture for them. Matt told us it was behind the bar, so we had to see for ourselves! Sure enough, the bartender Ryan proudly showed it to us. It’s even laminated! We had great fun with his picture, but it made us miss him and wish that he was there drinking a Racer 5 with us.

We ended our Friday evening at Russian River in Santa Rosa. We were last at Russian River many years ago when it was still located at Korbel. If you haven’t been, you need to go. It’s an ultra-hip place (but not douchey), so wear your coolest rockabilly outfit. When you go, make sure that you have lots of time. It isn’t a place that you can run in and out of quickly. 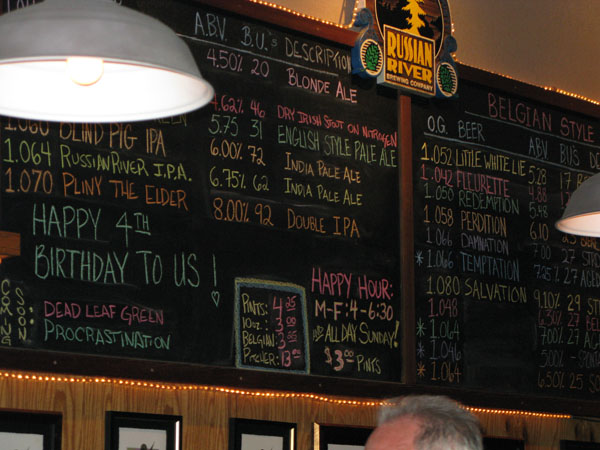 A weird thing happened at RR…when we walked in looking for a place to sit, one of the bartenders said “Hi beergeeks”. Chris had a beergeek shirt on (go figure) with a small logo and I had my sweatshirt on concealing my beergeek shirt. I’m not really sure, but I would like to think that he recognized us. Who knows? He did mention that the video taping of Chris walking in the door was a dead giveaway. The place was busy, so I’m not even sure how he saw all that. Then he brought us each a sample of Pliny. Wow, life is good!

We met some nice people at RR, including a guy named Mitch. He lives about two blocks from the festival site, so today we are parking at his house and walking over. We were even invited to his post-festival BBQ. Oh, and he has two wieners, although they are standards (45 pounds!) and long hairs. Through Mitch, we met Mark, who had the best beer word I have heard in a while…beerdo. You know, instead of weirdo? Maybe I’ll petition Chris to change our site to the thebeerdo.com.