In three days on our short North Carolina visit, we visited almost a dozen breweries. But we still had a few more to go to complete our journey. On our last day with our fellow beer travelers, Matt and Michelle, we tackled the last remaining targets in Asheville and just beyond.

Since none of the breweries opened until the afternoon, we had a relaxing start to the day in downtown Asheville. After a leisurely lunch, we were ready to finish our important work.

French Broad Brewing was located across the street and around a corner from the Asheville’s famous tourist landmark, the Biltmore Estate. It seemed like a nice day to sit outside in their beer garden but the blazing sun forced us to retreat into the tiny but cool tasting room. To the sounds of Appalachian music, we went through the French Broad lineup.

There were six beers in the French Broad sampler including another excellent IPA. But instead of talking about another West Coast-style hop bomb that I really liked, I’ll mention two of their other brews.

Much to Merideth’s pleasure (and mine as well) French Broad had a Kölsch-style beer. Gateway Kölsch was an excellent American example of the style, light-bodied and refreshing.

French Broad Zepptemberfest was a Zeppelin-style Märzen brewed with a Kölsch yeast. Merideth and I argued about whether or not “Zeppelin” was a style of beer. I kept insisting there wasn’t, but apparently I was wrong. Zeppelin-style, from what I can gather is another way of saying Kellerbier. Despite the confusion, Zepptemberfest was a nice brew with the caramel maltiness that I enjoy in the style.

Merideth and I don’t have the opportunity for too many “firsts” these days in our beer travels. But our next stop, Southern Appalachian Brewery in quiet Hendersonville thirty minutes south of Asheville, was a first for us. Due to a local ordinance, one had to be a member to drink the beer. We have never encountered this before, especially since we haven’t beer traveled in Utah.

Actually, only one of us needed to fill out the application form – the other one could be their guest. Since I’m a liberated guy, I had Merideth fill out the membership form and pay the $1 fee. Luckily, I was approved as her guest. We found this quirk to be quite entertaining and great fodder for video. In chatting with owner/brewer Andy Cubbin, the membership requirement, unfortunately, has also been a hindrance to business. They’re working on it and hopefully, the law will get changed. 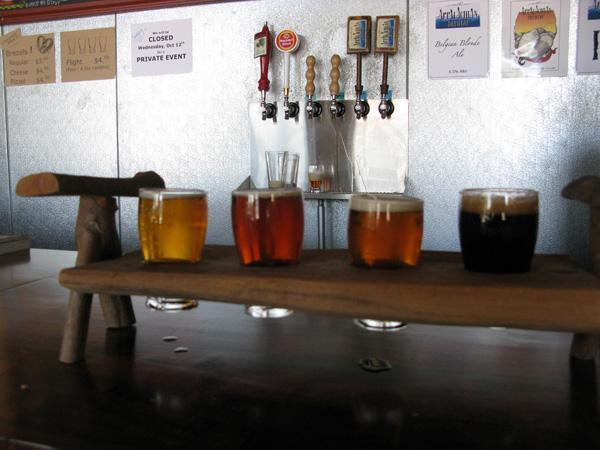 Membership and guest issues taken care of, we settled in to try the beer at what was my favorite brewery of the trip. Served in a really cute, had-to-be hand-made wooden tray, the four beer sampler was comprised of an Amber, IPA, Stout and Belgian-style Blonde Ale.

I loved the beers, especially the Belgian-style Blonde Ale and the IPA, both 6.5% ABV. The IPA, a 95 IBU hop bomb. was triple hopped in the kettle and dry-hopped with five varieties. My kind of beer!

Southern Applachachian appeared to be a really locals hangout. While we enjoyed our beers, a group of parents were having a few beers before the Friday night football game (at least that was the story I created in my head). Meanwhile, an older gentleman, who I gathered was the local sand bag toss champion, drank a beer and practiced his sport, waiting for someone to challenge him to a game. Great atmosphere, great beer and nice people, Southern Appalachian had the winning formula.

The last brewery stop of the day and trip, Highland Brewing was only a few minutes from French Broad, but seemed worlds away. Nestled in the  woods, the brewery’s tasting room was already bustling when we arrived in the early evening. It was quite an eclectic crowd ranging from the young hipsters that we had seen all over town to parents with their kids. While Mom and Dad had a beer or two, the kids used the large outdoor seating area as a giant playground.

The massive scale of the tasting room was something I hadn’t expected. Not only was there was the huge deck, but the interior was equally massive, looking like the live music venue that it was. Slowly spinning on the ceiling was the largest fan I think I have ever seen. Quite the contrast,the bar was tucked along the side wall, dwarfed by it’s surroundings.

It was too crazy to order a taster set so I ordered pints for Merideth and myself. While Merideth started off with their Gaelic Ale, I began with the 60 IBU Kashmir IPA. Both beers were well-made, but lacked the “Wow” factor that we got from beer at some of the other North Carolina breweries.

We finished up our North Carolina brewery tour sharing a pint of Areola Ale, a beer that Merideth was too embarrassed to order. Made for Breast Cancer Awareness Month, the pinkish hue was achieved with beet juice.

We visited fifteen breweries, learned about a new beer style and joined our first beer club during our abbreviated trip to Asheville. We also took a hike on a Cherokee reservation, visited our 650th brewery and ate loads of hummus. Asheville was good to us and we had a great time. Hopefully, we’ll have the opportunity to return someday.

View all the Asheville images