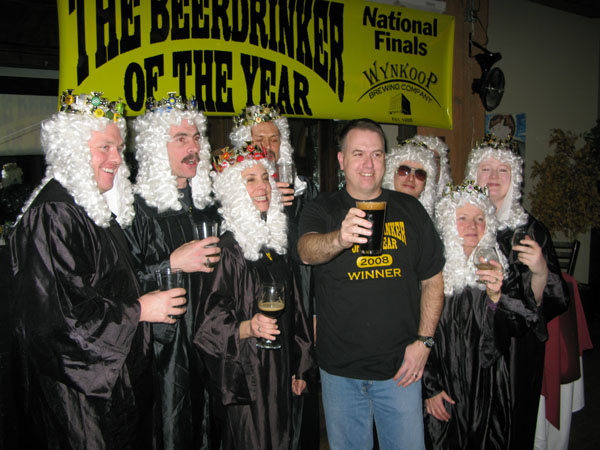 As promised, here is our report from Beer Drinker of the Year…

Since this is not an unbiased report of the event, I guess I should start by congratulating the two other worthy finalists; Richard Pedretti-Allen from Texas and J Mark Angelus from Oregon. Special kudos go to Mark for nailing the blind beer tasting portion of the contest.

Props also need to go out to Marty Jones from Oskar Blues for being not only the organizer but a great MC for the event.

For those who haven’t followed the story closely, we met Matt and his wife Michelle for the first time in January up in Anchorage. Prior to that, Matt and I had been emailing for about a year. Meeting them for the first time, Merideth and I immediately recognized kindred beer travelers and we became fast friends. After we got home from Alaska, we heard from Matt that he was a finalist for Beer Drinker of the Year. We had to go to Denver to be part of Matt’s entourage and to cheer him on.

We were also excited because Merideth and I haven’t been in downtown Denver for over 6 years and we wanted to see how things have changed. 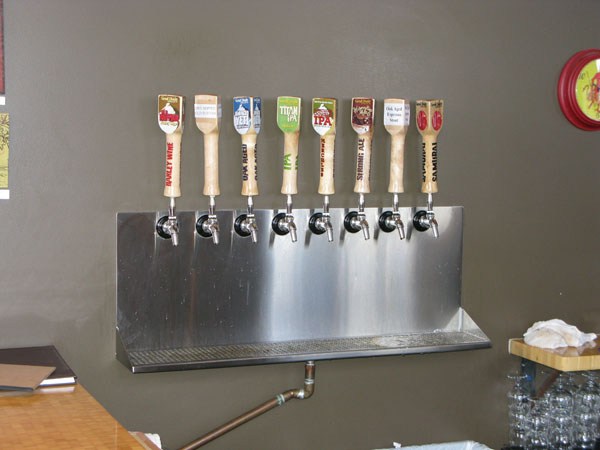 We arrived in Denver Friday afternoon and met Matt and Michelle at the Great Divide Brewery taproom. When Merideth and I were last in Denver in December 2001, Great Divide didn’t have a taproom. Back then, you just kinda wandered in off the street into the brewery and some guy would pour you beer.

Now, they have a nice taproom where you can get some of the best beer in Denver. Unfortunately, we only had time for one as we needed to be at the Falling Rock Tap House for the first Beer Drinker of the Year pre-event. 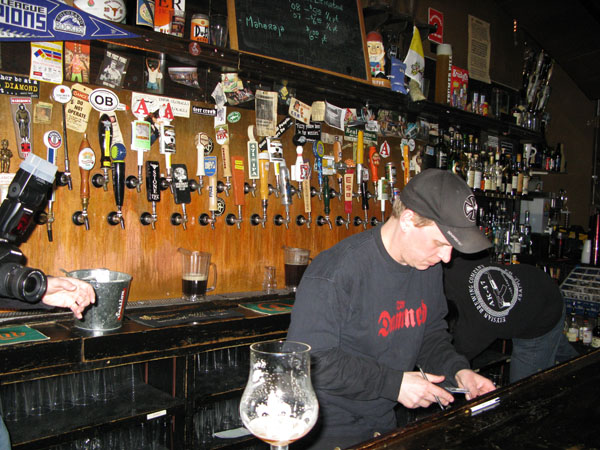 The Falling Rock is rightfully mentioned in the same breath as Toronado, Horse Brass, Monks, and Brickskeller… i.e. one of the best beer bars in the United States.

Friday evening was a meet and greet where the Beer Drinker of the Year judges could meet the finalists for the first time. The judges consisted of past finalists as well as beer luminaries such a the beer goddess herself… Lisa Morrison.

I was just happy to be at Falling Rock, where I could try Colorado beers that I can’t get where we live (which is pretty much everything). The highlight was the unveiling of the 2008 Collaboration not Litigation Ale, a blended Belgian Strong Ale from Avery Brewing and Russian River.

After a few pints, the meet and greet moved a few blocks away to the host Wynkoop Brewery for dinner. And if there wasn’t enough meeting and greeting for Matt, after dinner the party moved back to the Falling Rock for a nightcap. I’ll admit that Merideth and I called it an early evening and left around 10pm.

Saturday morning was beautiful so we decided to walk to “HiDo” to check out one of the two Denver breweries that we haven’t been to. And in the only disappointment of the weekend, we walked for 45 minutes to get to the nameless place only to find out they didn’t have any of their beer. I don’t know if they had run out or have stopped brewing, but Merideth and I didn’t get any new breweries on this trip. 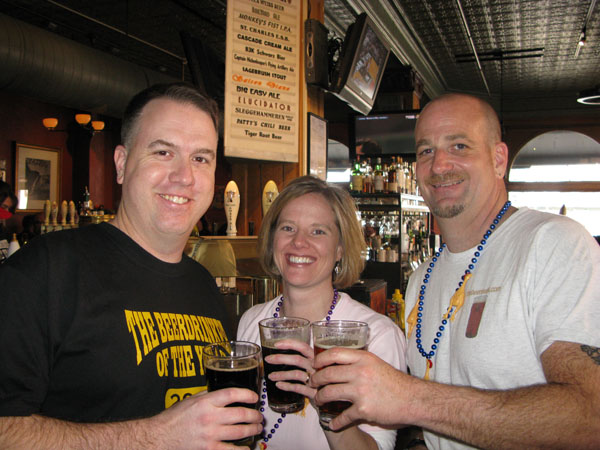 The finals were at Wynkoop and we were joined there by two friends Eli and Fran from Aleuminati, the not so secret society of better beer.

As for the actual contest, it is going to be hard to describe the events; you are just going to have to wait for the video. But as Merideth posted yesterday, Matt’s performance was masterful.

Being an eccentric beer geek who knows a lot about beer is what can get you to the Beer Drinker of the Year finals… what wins it is being funny and clever. Even when Matt was flailing to find an answer, he did it in a self deprecating witty way that had the crowd laughing.

But the clincher had to be the crowns. There is a portion of the contest called “Bribe the Judges”. What most contestants have done over the years is to bring beer, whether rare, local or homebrew. That makes a lot of sense and it would be probably what I would have done. 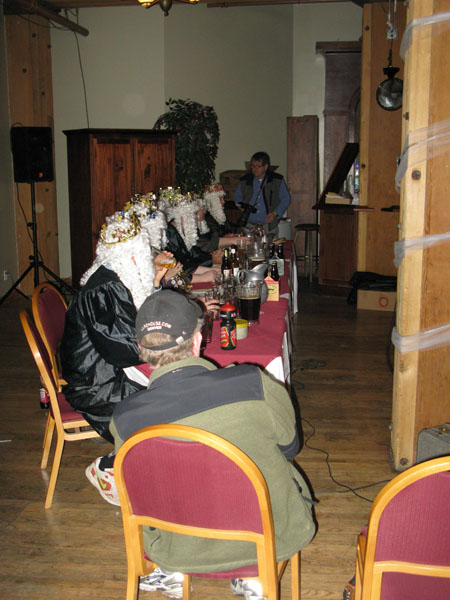 I have to say that Matt really thought outside the box on this one. He made crowns for each of the eight judges; attaching bottle caps with magnets from his extensive collection. And he didn’t just stick a bunch of bottle caps on the crown; each one had a theme. They were pretty impressive. And Michelle didn’t help him – besides being a beer geek and an amazing scrap booker – Matt is a wizard with the glue gun. In the end, Matt just didn’t bribe the judges; I think he created a new Beer Drinker of the Year tradition.

All that was left was the announcement and the partying afterwards. The party moved from Wynkoop to Great Divide to Rock Bottom. We had a great time hanging out with Marty, some of the judges, Fran, Eli, Matt, Michelle and the other finalist Mark. By the way, the judges were already trading bottle caps for their crowns.

So… congratulations Matt… you are not only the Beer Drinker of the Year, but also our hero!